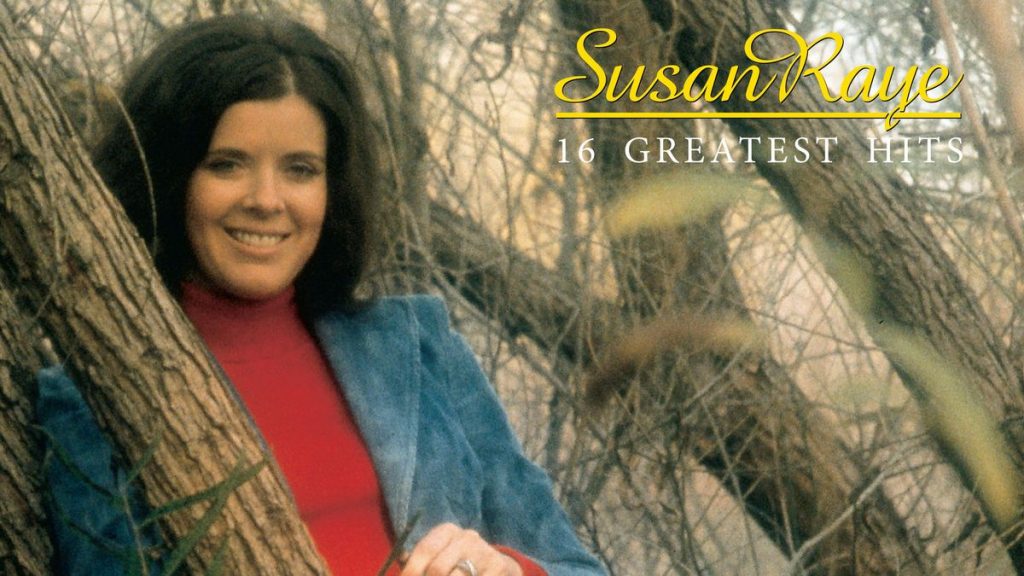 It’s only natural that a song called “L.A. International Airport” would find international appeal. That’s what happened to country singer Susan Raye in 1971, when the upbeat breakup tune crossed over to the pop chart – and even to New Zealand and Australia, where it became a gold record.

Raye sustained a steady commercial presence throughout the early 1970s while signed to Capitol Records and recording in Bakersfield, California. Her singing partner Buck Owens managed her career back then, introducing her to the mainstream through radio-friendly duets, live performances, and Hee Haw appearances.

Along with many charting duets, Raye’s own Top 10 hits include “Pitty, Pitty, Patter” and “(I’ve Got A) Happy Heart.” After leaving the music business in the mid-‘80s, she earned a counseling degree and raised a large family with her husband, Buckaroos drummer Jerry Wiggins, who died in 2018.

Earlier this year, Craft Recordings reissued two retrospectives — The Very Best of Buck Owens & Susan Raye and Susan Raye’s 16 Greatest Hits — on vinyl for the first time ever. CMT.com caught up with Raye by phone from her home in Santa Barbara, California, shortly after a bundle of new albums arrived at her door.

CMT: When you opened your package and saw those vinyl records, what went through your mind?

Raye: Well, it takes you back! I remember my first record album. It wasn’t so much hearing it on the radio, because when you’re making them, you hear them over and over and over. It was when I saw my first album cover with me on it. As a young teenager, I bought other people’s albums with their picture on it, and it was like, “Wow, this is really me! And this is like going back in time!”

I had read you were singing in Eugene, Oregon, and Buck and his manager, Jack, came in and heard you. Is that what happened?

That’s close. I was born in Eugene, but they found me in Portland. I wasn’t even 21 at the time. They came and sang at a nightclub but I wasn’t allowed to go into the nightclub because I wasn’t performing. So I stayed in the restaurant area, and then Buck’s manager, Jack McFadden, came through the door and somebody said, “Oh, do you know Susan Raye?” Of course, he didn’t — I was just a local singer. But he talked to me a while, and then to my amazement, he asked me to get up and sing with the Buckaroos.

I think a couple of years passed before I moved down there and went to work for them. They would be doing a concert – usually it was Portland, Seattle, and Vancouver, British Columbia, on a Friday, Saturday, and Sunday – and they would call me and say, “Would you like to join us on that tour?” And I said, “Well, sure!”

Then later on my own, I was going down to sing in Las Vegas for a week or two. And the last night I was there, I got a phone call from Jack saying, “Would you mind driving through Bakersfield on your way back to Oregon? Buck and I want to talk to you.” So I did, and they asked me if I would move to Bakersfield and become part of the Buck Owens All American Show.

At first I told them no. I grew up in Oregon and everything I know is there. It was like you have “Buck Owens and so-and-so, and so-and so, and many others.” And I didn’t want to move down there to become a “many other”! [laughs] Or just to be the token girl singer because it rounds out the show. They both said, “No, that’s not what we have in mind. We see something that is unique and different in you, and we want you to be a main part of the show.

Buck said, “I will manage you and Jack will book you.” I thought, “Well, whatever, we’ll see how it goes. And if it doesn’t work, I can always go back to Oregon.” And it worked! So I never went back to Oregon.

You mentioned the phrase “girl singer.” Did you get tagged with that?

Oh yeah. And they would always introduce you as “Pretty Miss Susan Raye!” or Pretty Miss Whoever. [laughs] I don’t know what they did if they had a homely, ugly singer. But you had to be pretty and you had to be a girl, so you could give them something else during the show. I remember back when I was releasing records, they would never think of playing two female records back-to-back. Never! Because you break up the guys with a girl now and then. … I guess they thought that [women] were just window dressing. But now Carrie Underwood and people like that can hold a candle to anybody.

The material on 16 Greatest Hits holds up pretty well. How were songs pitched to you back then? How did songs make their way to you?

They didn’t. Buck Owens was my manager and Buck Owens told me every song that I was supposed to sing. Because I didn’t know anything. I was only 24 and moved down from a little town in Oregon. I knew nothing about recording or any of that, so Buck got me on Capitol Records. Of course, first we did a duet together because that was a good way to introduce me to people, and so I did my first single with Buck, and then I was on Hee Haw all summer.

And that fall, my first record came out, which was a very good break for me. A lot of new records come out from people you have no clue who they are. You may not even get listened to. But with me, they said, “Oh, that’s the new record from that gal who sang on Hee Haw every week.” So at least the DJs were willing to listen to me. It made it a lot easier for me, to be honest.

I found it interesting that after you left Buck’s organization, you went to college and joined the running team. Was it track or cross country?

Both actually. I decided at 40 that I didn’t want to be an old entertainer who sings in crummier and crummier places for less and less money, to hang on for the last hurrah. I thought, life is too short and there are too many other things that I could also love doing. So I decided to go to college and become a counselor, and I got my Master’s in psychology and sociology, and became a marriage, family, and child counselor.

While I was in college, I decided to run because I had school, and I had work, and six kids and a large house and 10 acres and was busy. So I thought, I’ll never exercise if I don’t take a class at school that will give me exercise. So I started in a running class and the coach asked me, why didn’t I run for track or cross country? And I thought, “Because I’m 40 years old! What do you think?”

But then I got to thinking about it, and I thought, “Well, if they think I can, maybe I can!” So I did! I had never done sports in my life and I thoroughly enjoyed it. I had knee replacement surgery about nine or ten years ago, then after that I started running the L.A. Marathon, and I’ve done it for the last seven years.

With this music coming out on vinyl, a new generation of vinyl collectors may be discovering you for the first time through these releases. What do you hope that they hear in these recordings?

Whenever I performed, I always hoped that the people I worked for, and the people who came to see me, would see that I was easy to work with, that I would do whatever they needed, like interviews or whatever, and that I loved to talk with the people afterwards. … I’m a people person and I enjoy being around friends and family. That’s what I loved about singing. I don’t think so much about the impact about my music, but the impact of interacting with people.