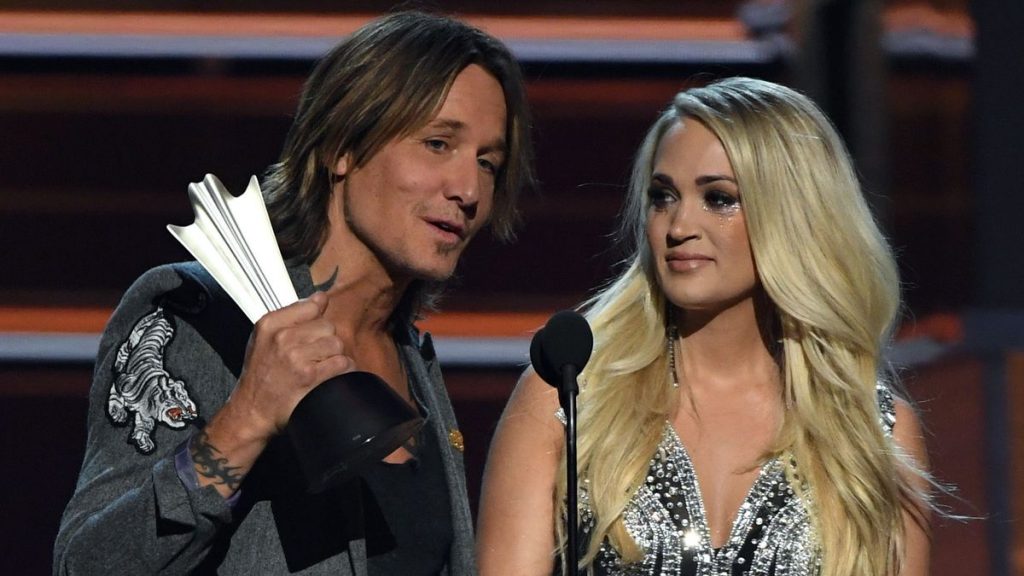 With Keith Urban, Carrie Underwood and More, This Luncheon Goes to 11

It’s impossible to know where to begin this story.

But I will just start with this: the Team UMG at the Ryman luncheon is the one concert no one wants to end.

It is the 11th year of the annual two-hour, box-lunch showcase during the Country Radio Seminar. And on Thursday (Feb. 20), the event brought out 16 artists for 19 songs.

1. Hot Country Knights
The “newest oldest country band did their debut single “Pick Her Up” complete with their signature mullets and synchronized 90’s choreography.

2. Brandon Lay
In a new song about pretending to be something he’s not, Lay made an impression on the crowd with “For My Money.”

3. Mickey Guyton
With her stunning voice backed only by the grand piano, her song that asks “What Are You Gonna Tell Her” received the only standing ovation of the day.

4. Travis Denning
The singer/songwriter first thanked the radio crowd for the success he’s had so far, so much so that he can now afford the large sweet tea at Chick-fil-A. Then he revealed that his new song “ABBY” is actually about a girl called Any Body But You.

5. Jon Pardi
When he introduced his brand new single — “It Ain’t Always the Cowboy” — Pardi joked that this one did not have “boots” or “heartache” in the title.

6. Caylee Hammack
Last year, Hammack played the Team UMG at the Ryman show with a full band and a big bang. But this year, she said, she came in instead with the story of the heartbreak that got her here, called “Small Town Hypocrite”

7. Parker McCollum
“I’ve always said I would never go in the Ryman until I was playing it,” McCollum said when he first took the stage (excluding the 7am sound check, which doesn’t count.) “If God played country music, He’d probably only play at the Ryman.” Even though it was his first time, his “Pretty Heart” made him seem at home on the stage.

8. Kip Moore
“I’ve been surfing for the last two months,” Moore said before singing his “She’s Mine,” “and almost came in here shirtless just for you.”

9. Adam Hambrick
Since Hambrick said he comes from a long line of preachers, he spread the good word about believing in country music with his “Forever Ain’t Long Enough.”

10. Kylie Morgan
“I swore to myself that I wasn’t gonna think about what I was gonna say out here and just let God give me the words,” the nervous newcomer said as she introduced a new song called simply, “I Break Things”

11. Sam Hunt
He took the stage and first thanked the industry crowd for the welcoming embrace now that he’s back after some time off. And he tried out a new song about regrets, and wishing her could give “2016” back to her.

12. Brothers Osborne
Being nervous is a good feeling to have, T.J. Osborne said as he shared that he and his brother John were working on new record right now. This may or may not be the new single, and it may or may not be called “Skeletons in Your Closet.”

13. Luke Bryan
After sharing that he almost had to take the stage alone because his band couldn’t find parking — rednecks and traffic don’t mix, he said — Bryan and his band performed the first single and title track off his new album, “Born Here Live Here Die Here.”

14. Carrie Underwood
In her very first appearance at the CRS luncheon event, Underwood performed her “Spinning Bottles,” backed gracefully and quietly with just a piano and a fiddle.

15. Keith Urban
Urban did a new song called “God Whispered Your Name” which he admitted was so much better than 2019, when it took him four attempts to get through “We Were” when it was brand new.

16. Keith Urban and Carrie Underwood
Because no luncheon is really complete without a little dessert, the two stars took the stage together for “The Fighter.”

17-19. Reba McEntire
But then there was Reba. The legend surprised the crowd when she took the stage for three of her biggest songs, finishing with her 1991 “Fancy.” And after originally signing with Mercury in 1976, then making some music for other Nashville labels, McEntire has now officially come back to the UMG team.