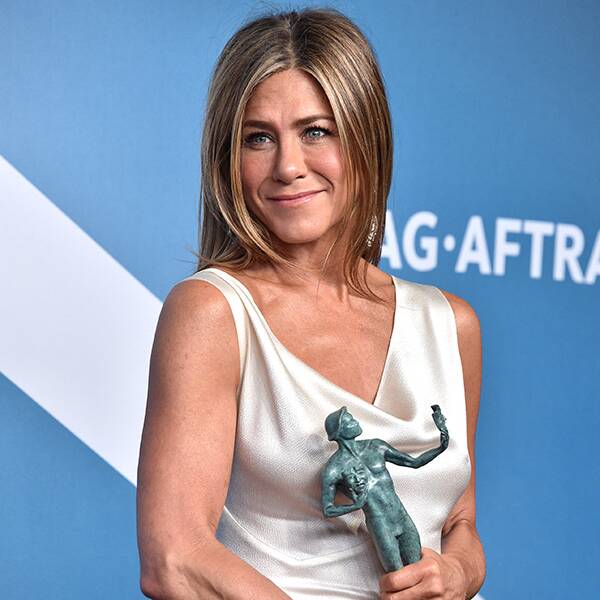 A night to remember!

It’s no secret that Jennifer Aniston was living her best life at the 2020 SAG Awards. Not only did the legendary actress take home an award for her role in The Morning Show for Outstanding Performance by a Female Actor in a Drama Series, but she nearly broke the internet.

You know, because she and Brad Pitt had a major reunion during the star-studded ceremony. And no one, not even their celebrity friends, could handle their adorable (and nostalgic) interaction.

Aniston even reacted to the Once Upon a Time in Hollywood star watching her acceptance speech. “We’ve all grown up together. We really have and it just feels like a really fun night to celebrate and cheer each other on and keep working,” she told Extra.

“You don’t really have that much of a life, so it’s nice to kind of come out and put a pretty dress on and sort of celebrate your friends and their work and inspire each other to keep going,” she continued. “It’s back to work tomorrow.”

On Monday, the Friends alum was clearly still not over yesterday’s show or her major win. If anything, she expressed it’s going to be one for the books!

“No wrinkles…,” she quipped about her white-hot satin gown that she dazzled in at the ceremony. “Harder than it looks!”

“Somewhere between these two photos, my peers gave me a gift I will cherish and a night I will never forget,” she added. “Thank you @sagawards, @themorningshow, and our incredible cast and crew. Let’s get back to work!”

“Only traveling like this from now on,” Billy Eichner shared. “Congrats!! And you looked beautiful and poised winning,” Maria Shriver responded.

It’s certainly a night that we’ll all remember!