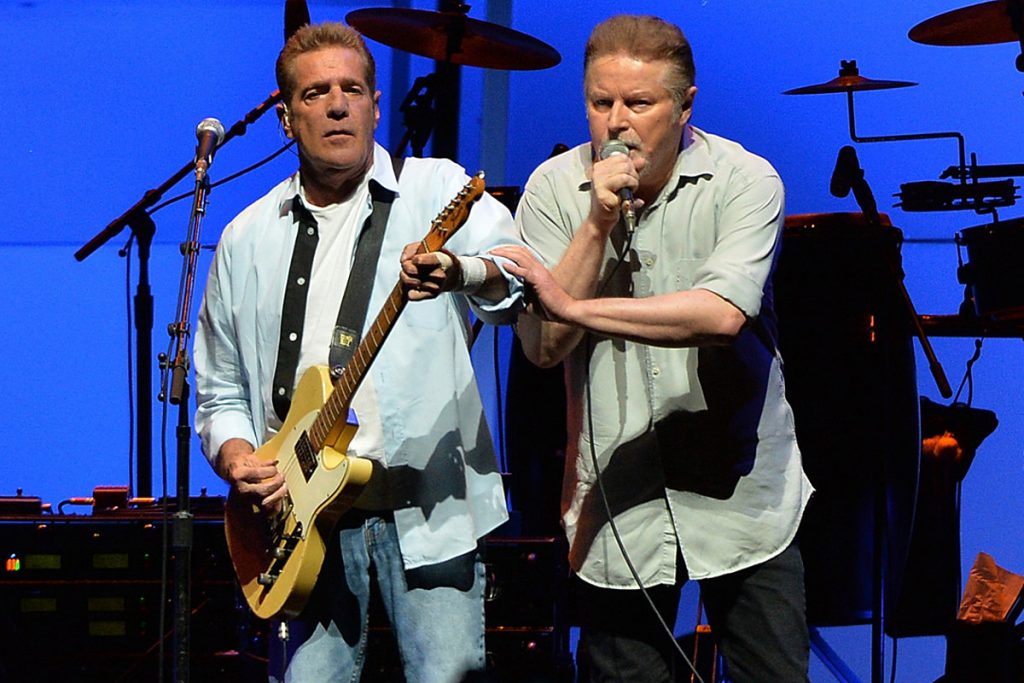 When the Eagles Kicked Off Their Final Tour With Glenn Frey


When the Eagles launched their History of the Eagles — Live in Concert Tour in 2013, nobody involved could have anticipated that the upcoming run of shows would mark their final tour with founding member Glenn Frey.

The History of the Eagles Tour was a remarkably ambitious road trek that, as its name implied, drew on songs from across the Eagles’ decades-long career, including material from all of the diverse eras of the group. The set list included early country-rock and singer-songwriter material, running all the way up through later rock hits.

The tour not only embraced some of the music of the past, it also saw the lineup of Don Henley, Frey, Joe Walsh and Timothy B. Schmit burying the hatchet with some of the band’s former members. Original Eagles guitarist Bernie Leadon returned to the fold for the shows to help re-create some of the early songs he had played on, and original bassist and singer Randy Meisner was invited to appear, as well, but his declining health did not permit him to participate. Former guitarist Don Felder, who departed the band against his will in 2001 and later sued the band and wrote a book about his Eagles experience, was the sole member not invited to take part.

The set list for the career-spanning shows began with Frey and fellow founding member Henley performing an early Eagles song titled “Saturday Night” before Leadon joined them for “Train Leaves Here This Morning,” another early favorite.

According to Setlist.fm, those shows ran through an average of 27 songs, including “Peaceful Easy Feeling,” “Lyin’ Eyes,” “One of These Nights,” “Take It to the Limit,” “Hotel California,” “Take It Easy, ” “The Long Run” and more.

As it turned out, Frey’s final public performance with the group was on “Desperado,” a song he and Henley co-wrote that was the title song of the Eagles’ sophomore album in 1973.

The Eagles played a private show at a St. Louis-area high school two days later, delivering a short set to 300 people as part of a birthday celebration for a private donor, after which they took a break. Unknown to the fans at the time, Frey had been struggling with various health issues for years, and after playing in pain for a long time, it finally caught up to him. He fell ill in October and developed pneumonia, and when he went into the hospital, he ended up never going home.

Frey died in January of 2016 at the age of 67 from complications from rheumatoid arthritis, acute ulcerative colitis and pneumonia, and fans and even the band members assumed the Eagles were finished. But on July 15, 2017, they regrouped in a new lineup that included Frey’s son, Deacon, and Vince Gill, playing their first show together at Classic West at Dodger Stadium in Los Angeles. That lineup continued to tour on and off until 2022, when the younger Frey announced he was departing the band.

The Eagles have continued to tour in 2022 on their extensive Hotel California Tour, which features them re-creating that landmark album in its entirety, accompanied by an orchestra. Gill has assumed vocal duties for most of Frey’s classic songs in their set.