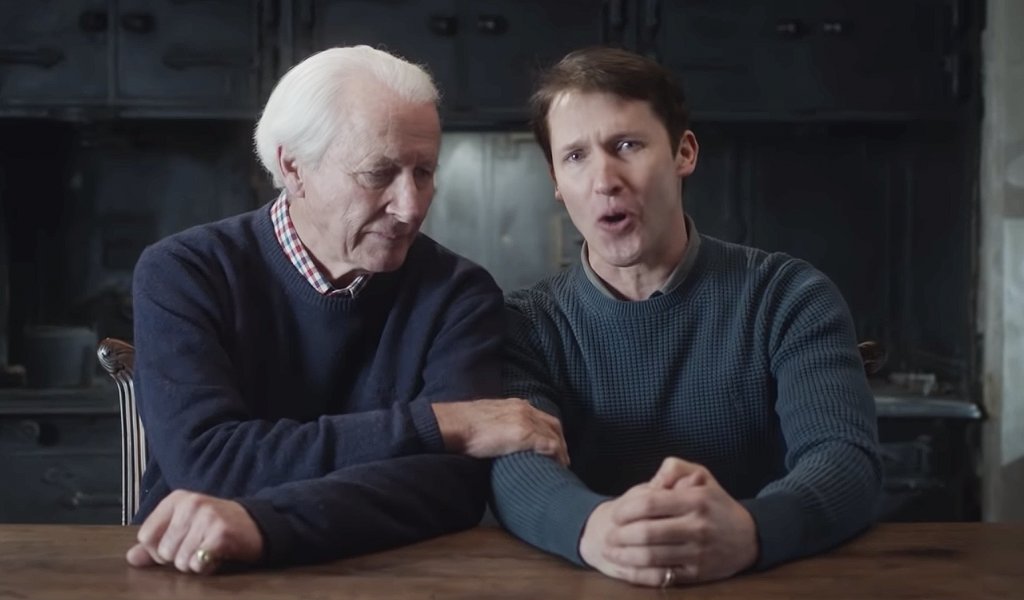 
British singer-songwriter James Blunt is best known for his sentimental heartbreak ballads “You’re Beautiful” and “Goodbye My Lover,” but his latest single “Monsters,” a tribute to his ailing father, is his rawest and most poignant yet.

In his devastating new “Monsters” music video, an anguished Blunt, in an extreme close-up reminiscent of Sinead O’Connor’s iconic, one-take “Nothing Compares 2 U” clip, stares down the lens, his eyes welling up with tears, as he sings: “I’m not your son, you’re not my father/We’re just two grown men saying goodbye… So Daddy, won’t you just close your eyes?/Don’t be afraid, it’s my turn/To chase the monsters away.”

Blunt struggles to maintain his composure throughout the first half of video, so much much so that it’s almost uncomfortable to witness. And when the camera finally cuts to a wider shot, it becomes clear why he is so distraught, that he isn’t acting, and that his tears are very real. Sitting stoically beside him is his real-life dad, former cavalry officer Colonel Charles Blount, who is battling stage 4 chronic kidney disease.

On the same U.K. morning program, Blunt spoke of the experience of writing “Monsters” after learning of his father’s kidney disease, explaining: “Really that has been an amazing moment, because when you realize your father’s mortality, it’s a great opportunity to say the things I’d like to say to him.”

Fans, particularly those who have lost a parent or who are preparing to say goodbye to a sick parent, have taken to social media to praise the touching video, which went viral after William Shatner tweeted it to his 2.5 million followers.

Just watched the video for @JamesBlunt #monsters the heartbreak having to (and being able to) say goodbye to a parent while they are still alive, a blessing and a curse ?

Jesus christ @JamesBlunt could you have given us a heads up about your new single ‘Monsters’ and how sad it is? I was in a room full of people when I played it and had to pause it, then blame allergies for the eyes welling up, then had to stare at the wall for 5 mins lol

just watched your Monsters Video … beautifully shot.. simple but so much meaning to me personally.. my father passed away last year thank you @JamesBlunt #monsters

I’ve never been ashamed to say I’m a huge fan of James Blunt. Served his Country and now an outstanding song writer. I dread the day that this song and video holds new meaning for me and him.

@JamesBlunt just listened to Monsters. Breathtaking. As a daughter watching my mum fade away it says so much. Thank you

All proceeds from Blunt’s “Monsters” single go directly to the charities Help for Heroes and the British Legion. The full lyrics for “Monsters” are below.

Oh, before they turn off all the lights

I won’t read you your wrongs or your rights

Tell you I love you once more

So here it is

I’m not your son, you’re not my father

I know your mistakes and you know mine

And while you’re sleeping, I’ll try to make you proud

So daddy, won’t you just close your eyes?

Don’t be afraid, it’s my turn

To chase the monsters away

Oh, well I’ll read a story to you

Only difference is this one is true

I folded your clothes on the chair

I hope you sleep well, don’t be scared

So here it is

I’m not your son, you’re not my father