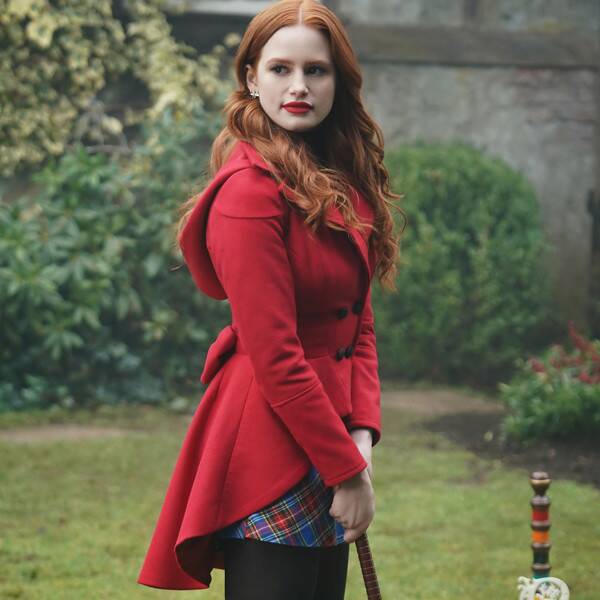 You’d think that after four years of acting on the show, Madalaine Petsch would know everything there is to know about the set of Riverdale.

In a new video for Architectural Digest, the Riverdale star hosts a tour of the Vancouver set and discovers some things she’s never even seen before, including a small kitchen in Pop’s, complete with recipes for soup.

The delightful 11 minute video features trips to Pop’s, Cheryl’s locker, a Riverdale High classroom, the student lounge, Cheryl’s bedroom and closet, the wardrobe truck, the hair and makeup truck, and even craft services.

We definitely learned some things we didn’t know, like the fact that Cheryl’s locker can be moved around depending on the shot that’s needed. We did know that one of the classrooms can be turned into whatever class is happening, but we did not know that one of the upcoming classes is a spoiler.

Petsch is most excited to show off Cheryl’s bedroom, which features a custom-made rose bedspread, an elaborate chandelier, and even a giant inflatable gummy bear chair that has never really been seen on screen.

She also heads into Cheryl’s impressive closet, which looks pretty amazing despite the fact that no scenes have ever taken place there. It doesn’t even have any of Cheryl’s actual clothes in it, aside from one pair of gold stilettos Cheryl once wore by the pool, “as one does.”

“Madelaine would never were those,” she says. “Madelaine goes for comfort, because Cheryl hurts Madelaine’s feet, so Madelaine just likes to keep it low key.

A trip to the wardrobe truck and the hair and makeup truck reveals that Petsch does her own makeup, which she says helps her get into character.

“I took over doing my makeup probably half way through season three, and I think that’s when I really would take this time to get into Cheryl’s mood and her character. I’ll look at what the scene is, I’ll look at what I’m wearing, and how Cheryl’s feeling in that particular moment and where her mind is at in those scenes, and I’ll do her makeup accordingly these days, and I think that helps me dial in a little more.”

In her real life, Petsch says she wears “a lot less makeup” than Cheryl does, and spends about 45 minutes doing Cheryl’s makeup every day.

Watch the full video above, and watch Riverdale tonight at 8 p.m. on The CW.