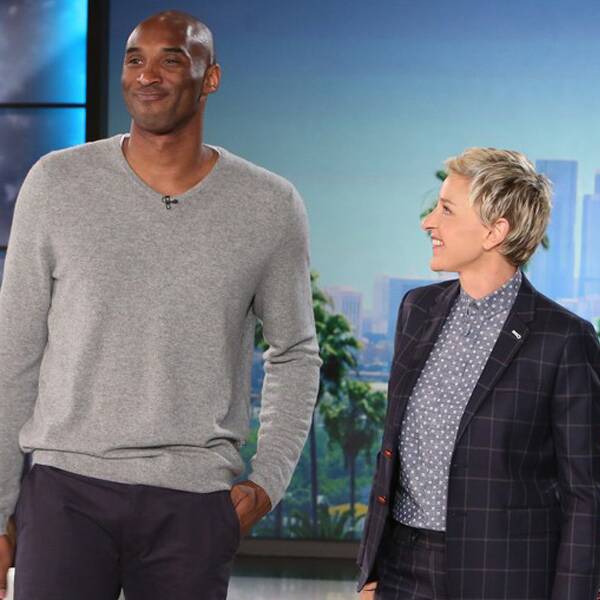 Like many of us, Ellen DeGeneres is struggling to imaging a world without Kobe Bryant.

The comedian reflected on the late NBA star’s legacy in an uplifting speech given during Monday’s taping of her talk show. Ellen, who last sat down with Kobe in April 2019, struggled to hold back tears as she urged audience members and fans of the athlete to savor every moment of life.

“Today is Monday. Yesterday was Sunday and it happened to be my birthday and the Grammy Awards. I was nominated. I didn’t win. Not the point,” DeGeneres joked.

She continued, “Yesterday was a celebratory day and we got tragic news about Kobe Bryant and everything changed in a second. That’s what I want to talk about. Life is short and it’s fragile. We don’t know how many birthdays we have. We don’t have to have a birthday to celebrate, just celebrate life.”

“I was backstage before the show started and I was saying to tWitch, because we’ve both been said today, ‘We’re gonna go out there and fill the room with love because that’s what everyone needs. Then I come out here and fall apart,” she shared with a smile.

On Sunday, Jan. 27, Kobe and his 13-year-old daughter, Gianna “Gigi” Bryant, were flying via helicopter to her team’s basketball tournament when it crashed into a hillside in Calabasas, Calif. The nine people on board, which included two of Gigi’s teammates, their families and the pilot, were all killed. Investigators are considering whether dense fog played a factor in the crash, and authorities predict it will take several days for debris and human remains to be recovered from the site.

During his last appearance on Ellen, Kobe discussed his excitement around welcoming his fourth child, a baby girl named Capri, with wife Vanessa Bryant.

“I’m super excited. I love my princesses,” Bryant shared, explaining that Vanessa “was putting the pressure on” him to have a boy. When asked if more children were in their future, Kobe responded, “I would go for a solid starting five. You just have your own internal basketball team.”

He said at the time, “At home, dealing with my daughters and watching them play sports, I try to teach them life lessons. They kind of look at me like, ‘Dad, shut up. You don’t know what you’re talking about.”https://www.eonline.com/”

Kobe and Gigi are survived by Vanessa, Natalia Bryant, 17, and Capri, 7 months.