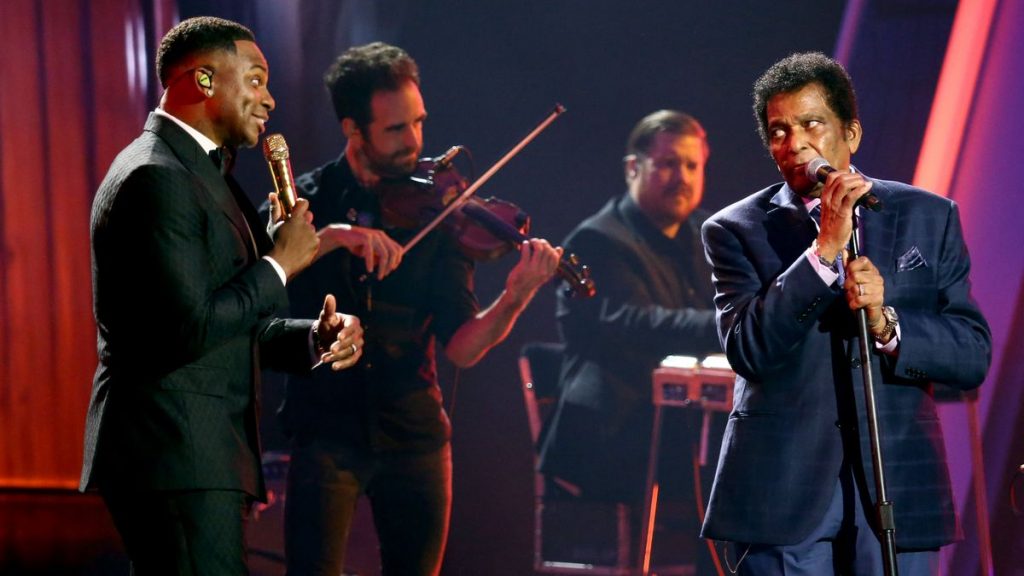 During the live show from Nashville’s Music City Center, Pride, 86, and country newcomer Jimmie Allen, 34, took the stage together to perform the 1971 No. 1 hit “Kiss an Angel Good Mornin’”.

Backstage after the show, Allen shared how honored he was to join Pride on the CMA Awards stage. “I remember four years ago — before I got my record deal — I spent my last $100 to come see Mr. Pride play the 50th CMA Awards. So four years later to be able to present him with the award — and stand here next to him and do a song with him — you imagine one of the biggest dreams you have and accomplishing that. And that happened for me tonight.

“It’s a privilege to be with the guy who was so important in my life, and in making me feel comfortable chasing this country music dream knowing that if somebody who looks like me did it, and sold more than 70 million records, I’ll be good. I just want to sell 30 records, and I’ll be good.”

“He’s gonna do all my talking from now on,” Pride joked.

When Pride accepted the CMA Award, he told the intimate crowd of artists gathered around the tables, “You might not believe, but I’m as nervous as can be. I’ll tell you something, I put a little something down that I have to say,” Pride said after taking a good long look at the crystal trophy in his hands and then listed all the people who had influenced his life and his career. “And to all my fans, I want to say thank you. Well, I’m through talking. I just want to thank everyone again.”

Other recipients of the award include Nelson, Dolly Parton, Kris Kristofferson, Johnny Cash and Kenny Rogers.

So Thankful I was able to perform with Charley Pride tonight. Tonight was really special to me. ♠️

Up next for Pride is his collaboration with Garth Brooks on “Where the Cross Don’t Burn,” a ballad on Brooks’ upcoming album Fun due out on Nov. 20.