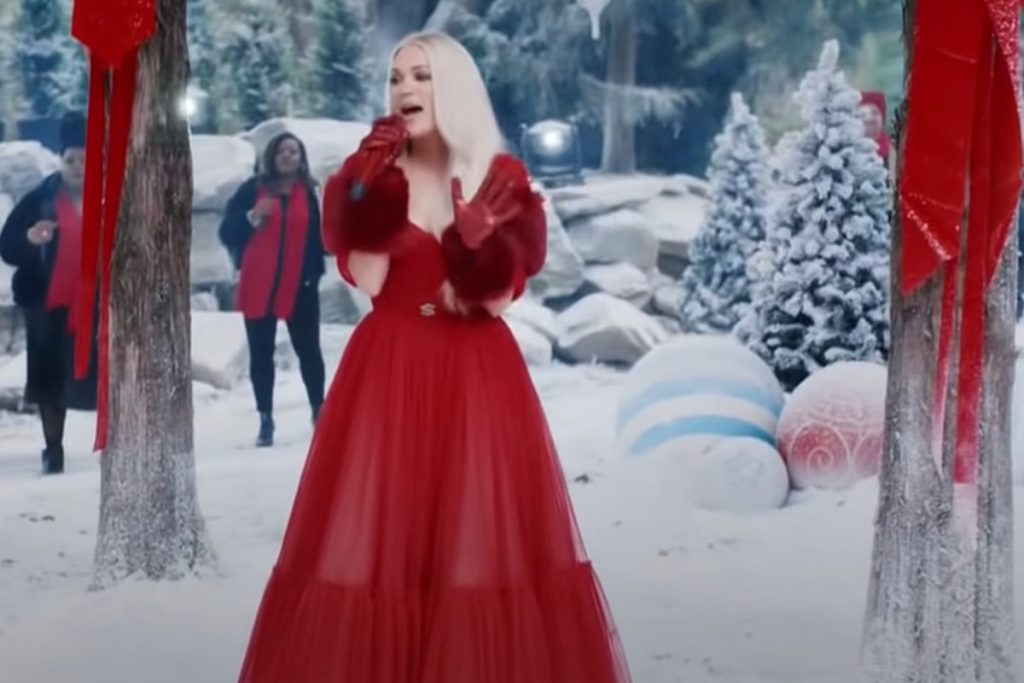 
Carrie Underwood brought a hearty dose of cheer during her performance at the 95th annual Macy’s Thanksgiving Day Parade, which took place in New York City on Thursday (Nov. 25.) She performed her song, “Favorite Time of Year,” which comes off the track list of her 2020 Christmas album, My Gift.

She was one of several country performers taking the stage during the parade; also on the bill was Mickey Guyton, Jimmie Allen and Chris Lane. While many of the parade’s performances took place live and from various floats in the streets of New York City, Underwood submitted her performance long-distance from Nashville, allowing her to display her song against a dazzling backdrop inspired by a winter wonderland.

Wearing a red, floor-length gown and gloves to match, Underwood performs in front of a snow-covered, pine tree-dotted field. Giant ornaments are scattered on the ground and festive red bows are tied to tree trunks, and behind Underwood, backing singers in black coats and red scarves sway along to the music.

For the past couple of years, Underwood has worked hard to make the holiday season a little extra special for her fans. Following the release of My Gift in 2020, she returned in 2021 with her lighthearted tribute to holiday food, “Stretchy Pants.” The singer’s also slated to make an appearance during the upcoming CMA Country Christmas special, which airs Monday night (Nov. 29) on ABC.

The 95th annual Macy’s Thanksgiving Day Parade aired Thursday morning between 9AM to Noon ET on NBC and Telemundo. You can catch Underwood’s performance, which starts at the 31:00 mark, below: