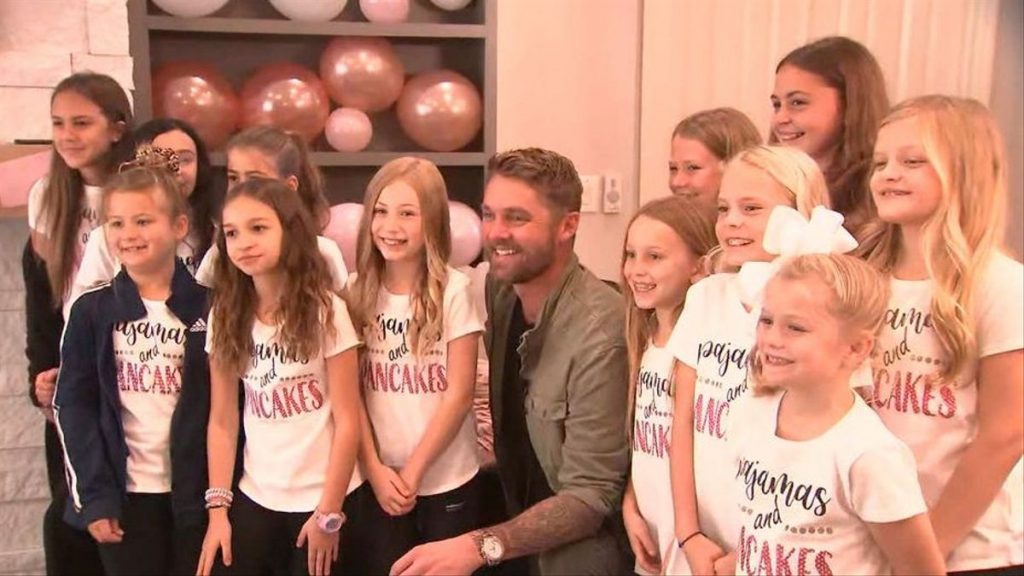 Early Wednesday morning (Feb 16.), a 10-year-old girl from Lithia, Florida received an unforgettable birthday surprise – when her favorite country star Brett Young stopped by to have some fun at her “Pajamas and Pancakes” breakfast before school.

Just weeks before the visit, Abbie Simmons penned a letter to the country star inviting him to her 10th birthday party. Unfortunately, Young received the request too late – leaving Abbie’s mom and close friend, Lindsay to brainstorm a plan B.

Since Young couldn’t attend, the two made do with the outcome and purchased a life-size cutout of the hitmaker. Shortly after the festive affair, Lindsay received a message from Young’s camp requesting a new date for a belated birthday bash.

In cahoots with Abbie’s mother and Lindsay, Young sneaked through the garage with a guitar wrapped around his neck. While walking into the house, Young serenaded Abbie and a dozen of her closest friends with his smash hit, “Lady.”

“He walked in, and I didn’t even believe that he was there,” Abbie told FOX 13. “I was speechless and didn’t know what to do.”.

FOX 13 documented the memorable moment and captured Abbie’s face when the award-winning artist made the grand surprise. While her friends circled around her on the living room sofa, Abbie was glued in the middle of a coffee table with a smile ear-to-ear.

“I remember when I first heard your heartbeat | It had only been eight weeks| Standing there| Staring at the screen was the first time you ever scared me,” he sang to the group of screaming girls.

“We got your letter, but we got it too late. I hope it’s OK that we came to this part of the party. Is that all right?” said Young after the performance of Abbie’s favorite song. “Yeah,” the lucky birthday girl replied full of enthusiasm.

The Florida native continued to tell Fox reporter Jennifer Epstein that the country crooner stuck around after his performance to take photos, chat, sign their matching T-shirts, and to even pose with the hilarious life-size cutout of himself.

“He was just really nice and stuff,” she concluded before she flipped around to show off the signature she received from the A-lister.

Before heading out, Young allegedly told Abbie and her clique that it was the first 10th birthday that he ever performed at and thanked the young fan for the opportunity.

In case you needed a little help getting in the Valentine’s Day spirit… In Case You Didn’t Know: The Love Songs is available now! (See what I did there?) ❤️ // https://t.co/ibcBBOr3ey pic.twitter.com/UMz9zqmKuF

The BMLG Records and Big Machine artist has had quite an exciting week so far – as he recently released (Feb 14) his six-track EP, In Case You Didn’t Know: The Love Songs.