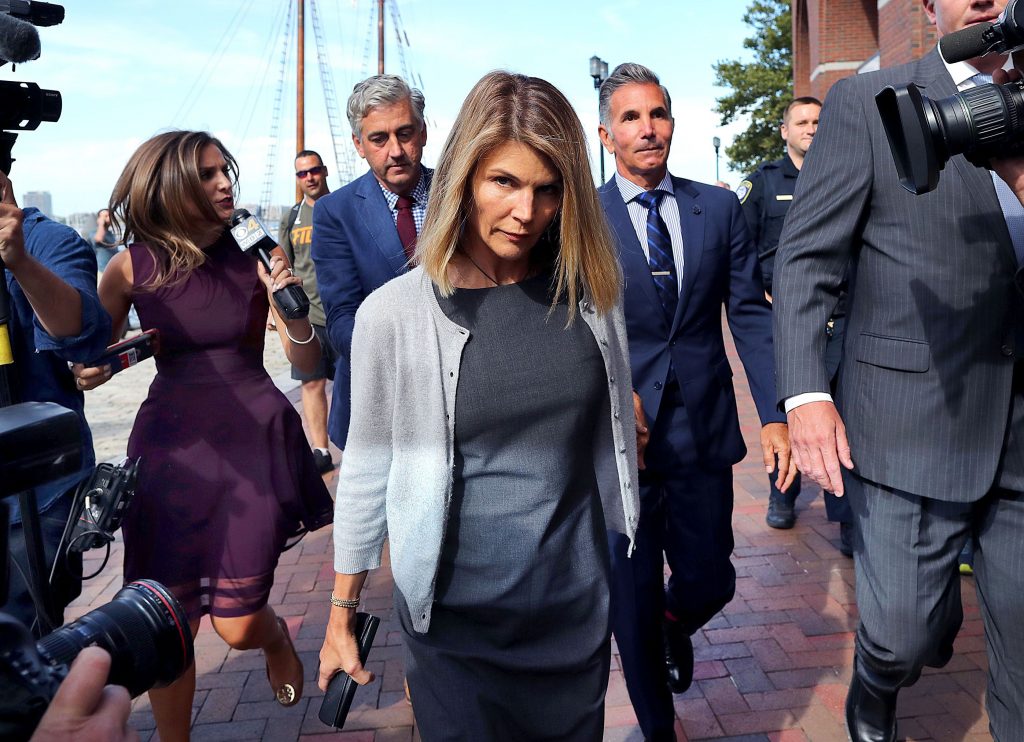 New court documents released Wednesday reveal USC was tipped off that Lori Loughlin and Mossimo Giannulli’s two daughters were not serious athletes, one year before news of the college admissions scandal made headlines. Prosecutors also released emails they believe prove Giannulli and Loughlin rejected a “legitimate approach” to get their oldest daughter into the university.

In March 2018, Marymount High School — where the actress’s daughters Olivia Jade, now 20, and Isabella Rose, now 21, attended — reached out to USC. According to documents obtained by the Los Angeles Times, Marymount “doesn’t think either of the students are serious crew participants,” a USC employee wrote in an email. The university asked Donna Heinel, the third-ranking administrator in the athletic department, to investigate.

The next day, Heinel determined Olivia Jade rowed for a “competitive” club and USC’s coach “thinks she has talent,” she wrote in an email. Heinel was ultimately arrested in the “Operation Varsity Blues” sting and is accused of working with William “Rick” Singer to get unqualified students into USC.

Heinel has pleaded not guilty to conspiracy to commit racketeering, fraud and bribery. Her attorney declined to comment to the Los Angeles Times. USC isn’t issuing a statement.

According to the indictment, Loughlin and Giannulli paid Singer $500,000 to get their daughters into USC as crew recruits, despite neither girl having played the sport. Singer has pleaded guilty to his role in the scam and is cooperating with the government. The Full House star and her fashion designer husband have pleaded not guilty to conspiracy to commit fraud, money laundering and bribery and maintain no wrongdoing. The couple claims they thought their $500,000 payment to Singer would go towards legitimate donations to USC.

According to ABC News, the couple argues in documents that “universities — as part of their legitimate admissions process — regularly solicit donations from the families of prospective students, and … such donations can have a material effect on admissions decisions.”

Among 480 pages of emails filed in federal court as proof, prosecutors say, that Loughlin and Giannulli knew what they were doing was wrong. The couple “specifically rejected this ‘legitimate’ approach” when Isabella Rose was applying in 2016, Eric S. Rosen, an assistant U.S. attorney, wrote in a motion filed Wednesday.

The documents include emails between Singer and Giannulli, where Singer told the couple how he would make their daughter look like a “coxswain,” the person responsible for steering boats in rowing competitions.

“In August 2016, Singer told the Giannullis the he would ‘create a coxswain profile’ for their daughter, and noted that ‘[i]t would probably help to get a picture with her on an ERG [an indoor rowing machine] in workout clothes like a real athlete too’,” the court documents state, per ABC News.

“In fact, the Giannullis’ daughter did not row crew, and was not a coxswain,” the documents continue. “Yet, Giannulli, copying Loughlin, replied, ‘Fantastic. Will get all.'”

Giannulli supposedly emailed Singer back a photo of his daughter posing on an ergometer rowing machine.

According to the Los Angeles Times, Singer replied, “Got it all. Profile is being made as a coxswain and USC is awaiting my packet with the transcript, test scores and profile.”

Prosecutors also included an email exchange days later from September 2016 between Giannulli and an official in USC’s development office, whose name is redacted. The official apparently offered to “flag” their daughter’s application and asked “if I can be at all helpful in setting up a 1:1 opportunity for her, customized tour of campus for the family, and/or classroom visit.”

Giannulli, who was allegedly already conspiring with Singer, told the development official: “Thanks so much, I think we are squared away.” That night, he forwarded the email to Loughlin and wrote, “The nicest I’ve been at blowing off somebody.”