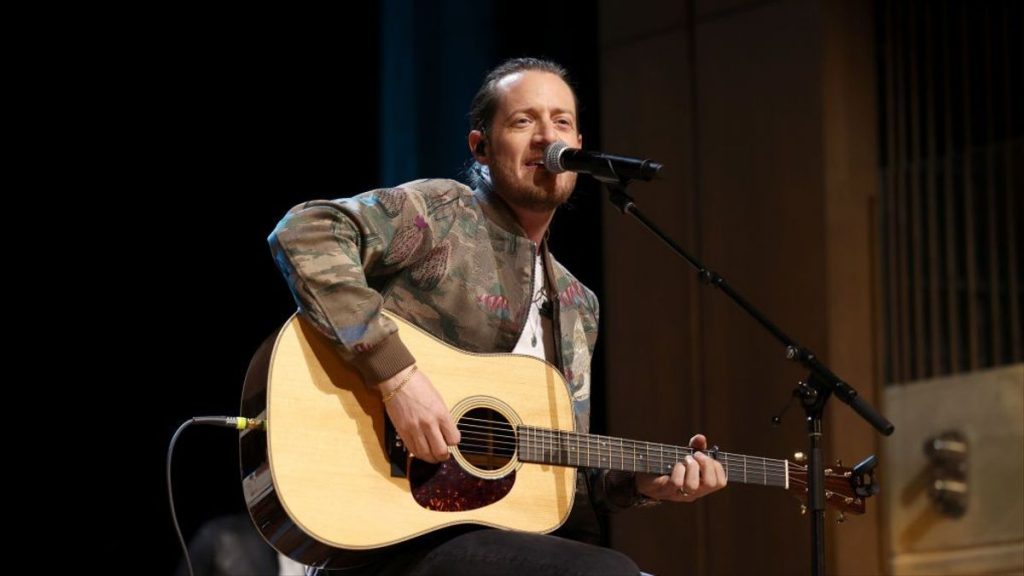 Country hitmaker Tyler Hubbard recently (July 6) jumped on social media to remind fans to slow down, be present, and to reveal items from his childhood time capsule. In a short show-and-tell-like video, the country crooner explained the inspiration behind his latest single, “35’s.”

“So, ’35’s’ is really about being present and slowing down in life and enjoying life for what it is,” shared the multi-platinum artist. “I’m guilty of running too fast all the time, and I honestly need a reminder on a daily basis to slow down, take life in, and let it all sink in, everything around you.”

Within the “35’s” music video, Hubbard is filmed driving from Nashville to Georgia to dig up an old-time capsule full of sentential keepsakes. Once the vocalist arrived at the destination, he pulled out a map he had sketched as a child. The singer-songwriter hoped that the folded-up piece of paper would locate the hidden “treasure” he left behind well over a decade ago.

“Really, my favorite part of the video was the fact that I got to dig up a time capsule, I buried when I was 8 or 9 years old, which has a lot of special things that reminded me of where I came from, of who I am,” Hubbard added.

The hitmaker slowly opened the box without hesitation to reveal the items inside. One by one, he explained the value behind each gem.

“First up, on top of everything we have the Bible,” he said while holding up the dusty book. “Which is awesome, because this was a big part of my childhood. It still is a big part of my life, my foundation, and what I try to live by. Kind of my life map, if you will.”

“This is a fun little reminder of who I was as a kid. Which I love cars, anything with motors, I love speed. Although “35’s” represents slowing down a little bit, this was still my reminder to have fun and live life to the fullest and don’t be afraid to play a little bit.”

“This very special photo, which is me at probably six years old at a motocross race. Which I did almost every weekend,” he said while displaying the snapshot. “To me, this photo just represents being a kid and really knowing how to just play and let loose and have fun — kind of channel the childlike nature that’s inside of all of us.

“Here’s a special photo of me and my dad when I was super young,” he declared. “I lost my dad when I was 20. So, we had a lot more years together. But this photo just takes me back to just good times with him having fun. Thumbs up was his thing we always did, whether we were racing or riding dirt bikes. It looks like we’re on a boat here, just having a good time. So, just a big important part of my story.”

“Another family photo, just me and my brother before my sister was around,” he pointed out. “This is the typical church photo, that goes in the yearly church bulletin or whatever it is that the church did. So, this kind of just takes me back to the early days. Getting dressed up and going to church on Sunday mornings with the family. So, that was a cool flashback.”

“This, my friends, is a big part of my childhood. BlackHawk – this CD was actually one of my very first CDs I ever had,” he shared full of excitement. “I wore it out, I scratched the heck out of it, and it brought me back to probably eight, nine, ten years old…back when all we had was CDs.I only had a handful, but this is one of the first ones. So, this is really special. BlackHawk – shout out to you guys. I love you guys and always have,” he added while holding it up.

“This is probably one of my favorite parts of the time capsule, which was a note from myself that I wrote when I was a kid to my 35-year-old self,” said Hubbard. “It just was a reminder to stay young and remember where you came from. Make sure you stay rooted in your values and who you know you are. This, for me, kind of represents a lot of the work I’ve done over the years – mentally, emotionally, therapy work… I’ve written myself. I’ve written my younger self letters, you know, in the last few years. I’ve written my older self-letters. So, this just kind of represents all those things and makes it kind of extra special,” he concluded.

The feel-good melody infused with exhilarating guitar pulls, thunderous percussion, and Hubbard’s contemporary country twang, is destined to be the song of the summer.

The jam penned by Hubbard, Jordan Schmidt, and Michael Tyler is another sneak peek into his highly anticipated debut solo album. The family-friendly anthem shines a light on Hubbard’s current state of mind and follows his chart-topping radio hit “5 Foot 9.”