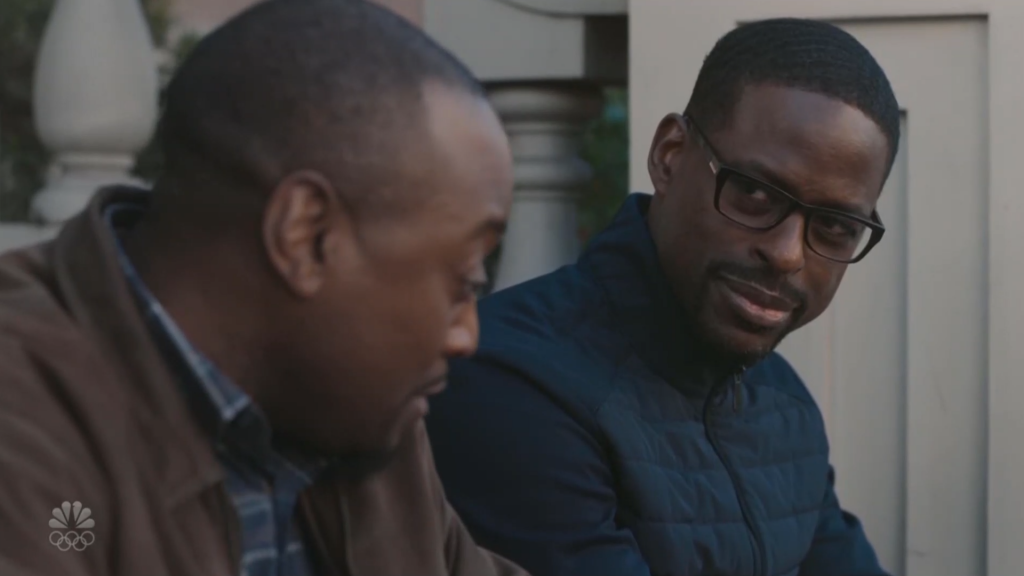 Part one of the This Is Us Big Three trilogy was all about Randall Pearson, whose life-long battle with anxiety was triggered following a terrifying break-in while Beth and his daughters were sleeping. Over the course of a week, following the incident, Randall struggled to regain composure as his anxiety seeped into other aspects of his life, until he eventually reached his breaking point.

Immediately following the episode Tuesday night, Sterling K. Brown took to social media urging viewers to be kind to each other and to not be afraid to ask for help:

Hello, my name is Sterling & I’m here for you. We all have our struggles & fears, but no one should fight them alone. Let’s remember to be kind to each other, there for each other & ask for the help we need because everyone deserves to live free, happy & healthy.✊? #ThisIsUs pic.twitter.com/bp6ZjzCCGt

While Mandy Moore tweeted about how proud she is to be a part of the show and praised the episode for “destigmatizing asking for help when it comes to mental health.”

Fans loved This Is Us shining a light on mental health as well. However, they were appreciating one particular scene, in which Darnell asked Randall if he goes to therapy. Randall was immediately opposed to the idea, but Darnell insisted, saying, “Look, bro, I get it. Us men of a certain shade, we’re not used to talking. But that’s therapy, right? Talking. It doesn’t always have to be that deep. You can just talk about everyday stuff.”

The scene hit home for many viewers, who took to Twitter to praise the show for normalizing the discussion of therapy and mental health within black communities.

One of my favorite episodes of @NBCThisisUs. Not only did they bring up an important discussion around black men and mental health. They also had TWO Black men openly discussing their mental health. #ThisIsUs

This episode showed the importance of mental health, especially for black men. 1/3 black men get the mental health care they need. We need to normalize asking for help when needed #ThisIsUs @SterlingKBrown

A #MentalHealth conversation between two #BlackMen on one of the most popular TV shows of today. One telling the other that hiding behind what we sometimes view as strength is actually not OK. How [powerful] is THAT ?? | #ThisIsUs

This episode is preaching the fact that the stigma on mental health issues is harmful to everyone. Ignorance fuels hate and fear. Then, people are afraid to get help and have a problem. Stay Woke, guys. Get Educated. #MentalHealthAwareness #ThisIsUs

Yassssss A BLACK Man To ANOTHER BLACK MAN Having A Conversation About Mental Health,Therapy It’s So Looked Down In Our Community,I’m So Glad It’s Being Talked About Yassssssss‼️??#ThisIsUs pic.twitter.com/HunZ9blH9N

These two black men sitting on the stoop being open and vulnerable with each other about mental health, such a beautiful thing #ThisIsUs

While Randall might not be open to seeing a professional therapist yet, he is opening up to his brother Kevin, who will be featured in part two of the Big Three trilogy next week.

Watch John Legend’s ‘This Is Us’ cameo, which had fans freaking out: