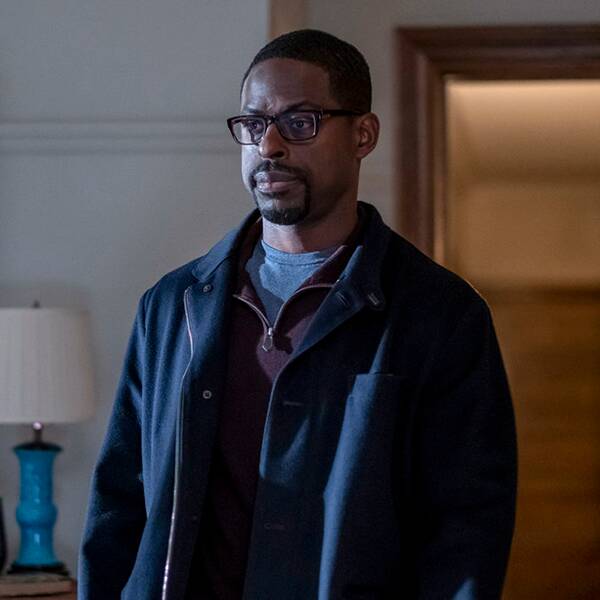 This Is Us Kicks Off Trilogy With Massive Panic Attack

This Is Us just kicked off its latest Big Three trilogy with one giant panic attack.

As we watched Randall (Sterling K. Brown) deal with a home invader, a massive town hall meeting, and his mother’s illness, we could not help but join him in getting extremely stressed. That was hard to watch, especially if you’ve ever felt the least bit overwhelmed.

“A Hell of a Week: Part One” was the first in a series of three episodes telling the story of the same week from the perspectives of Randall, Kevin, and Kate respectively, in which they’re all “really going through the wringer.” For Randall, the week began with a trip to Los Angeles to find out that his mother’s memory is deteriorating, then involved a man with a knife invading his home in the middle of the night, followed by a town hall filled with angry constituents, followed by Randall punching a purse snatcher to the point of breaking his own hand, and resulting in a full-on panic attack, which he called his brother to help get him through.

That phone call at the end of the episode is where we saw the set up for next week’s Kevin-centric episode. After going back to Pittsburgh for his ex-wife’s mother’s funeral, he ended up in bed with someone. We just don’t yet know who that someone is.

That will be revealed next week, but for now, we’ve got to talk about Randall, with some insight from a conference call with executive producers Isaac Aptaker and Elizabeth Berger.

One major and kind of upsetting revelation we got tonight was that Randall, a man with a serious anxiety disorder, has never been to therapy. That was addressed in a scene with Darnell (Omar Epps), who opened up to Randall about having gone to therapy and how hard it is for black men to get past the stigma of needing that help. Randall still told him that he runs, and that works just fine for him, but clearly it’s not working.

“I remember we did have a long conversation with [Sterling K. Brown], which was really interesting, about why Randall isn’t in therapy by now, for a guy who seems so in touch with his emotions, and so present and so emotionally empathetic and there for his family. Why does he have this block in his own life? We kind of picked it apart with Sterling, and it was really interesting, writers and actor together trying to dissect the character and get into what is it about the letting yourself be vulnerable and giving up control sort of element of going to a therapist that Randall is really resistant towards.”

We’ll see more of Randall’s deep dive into his own mental health this season, but we might not necessarily get to that talk he and Beth were going to have.

“Sometimes in life you kind of have the plan to do the right thing, so obviously we’re dying for these two to talk, we’re dying for them to sort of work out a system for Randall to get control of his anxiety once and for all, but sometimes life gets in the way and you don’t get to do the plan that would have been the answer,” Berger said.

Kevin’s “Hell of a Week” will “follow him to Pittsburgh, and we see why he decided to go to Sophie’s mom’s funeral, if he had any interaction with Sophie, what it’s like for Kevin to be back home again on his old stomping grounds.”

The episode will cover the same timespan of Randall’s episode, and “we’ll see how his story intersects with Randall in these couple of points when they call each other,” Aptaker said.

“I think it is a really beautiful deep dive into Kevin’s past and his relationship with Sophie,” Berger said. “Tonally, I think this one will have a bit more of a nostalgic note that we’re really excited to share with people as we see sort of different parts of this relationship that maybe we haven’t gotten to just yet.”

Kate’s “Hell of a Week” will likely pick up with the situation we left Kate and Toby in, where Toby admitted the fact that baby Jack was blind made him too sad, and will also revisit teen Kate’s relationship with Mark. In flashbacks tonight, we saw teen Randall canceling a trip with Beth to a grief group because Kevin had called to tell him something was wrong with Kate.

“I mean I think people can tell by now that Mark is not the greatest guy, and probably is not the guy that Kate should be with, so we are definitely going to see things start to come to a head in that relationship, in a way where potentially the family is going to really have to rally behind Kate and sort of say, perhaps this is not the guy that you belong with,” Berger said.

At the end of the fall finale, we saw a flash-forward to the Big Three’s 40th birthday. Kevin, Kate, and Rebecca were celebrating at the family cabin with Kevin’s mysterious pregnant fiancee, while Randall wasn’t there because the family is no longer talking to him.

Aptaker said we will not quite get to that flash forward this season, because the seasons always start with the Big Three’s birthday, “so that’s something we’ll be caught up to by our first episode of season five, but we won’t get all the way there this season.”

Aptaker and Berger couldn’t say when exactly we’ll find out who Kevin’s pregnant fiancee is, but the reason for the falling out with Randall is coming up in the “near future.”

“By the start of next season, they’ve had this falling out, they’re not on speaking terms,” Aptaker said. “In this episode, they’re so beautifully there for each other, and they have this pretty incredible brotherly relationship. So something big is coming in this next run before the end of our season that will tear these two apart.”

That’s all coming up, though not for a couple weeks because This Is Us won’t be back until Tuesday, February 11 on NBC.

E! and NBC are both part of the NBC Universal family.