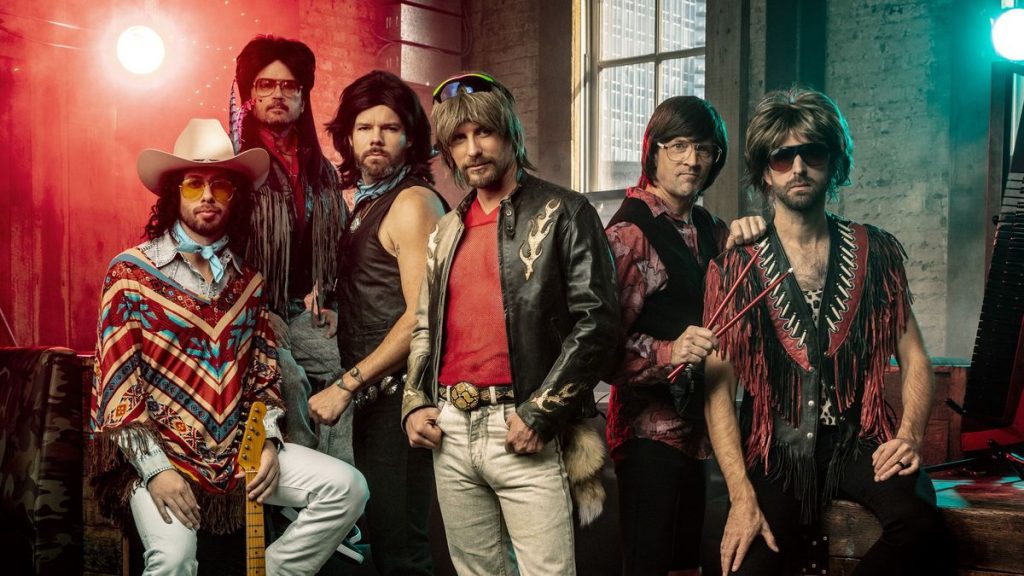 The Triumphant Comeback of the ’90s Band You Don’t Remember

No doubt Ken Burns is wringing his hands at having turned in his panoramic documentary on country music only weeks before Hot Country Knights — perhaps the most fabled if obscure band of the 1990s — announced its re-emergence.

The Knights, who bear a superficial resemblance to Dierks Bentley and his ensemble, got a proper launch Thursday morning (Jan. 23) during a press conference held at Nashville’s CMA office. As befitted the Knights’ rootsy, low-budget origin (they regularly played Hooters’ parking lots in their heyday) the event was catered by Waffle House.

Even so, there were piles of free Knights-monogrammed hoodies, ski caps and fanny packs for the several dozen reporters and industry hangers-on to grab and re-sell on eBay. Also peppered throughout the crowd were friends and kinfolks from the Knights’ hometown, which bandleader and lead singer Douglas D. Douglason identified as Moose Knuckle, Tennessee, “right across the river from Camel Toe.”

The focus of the press conference was to reveal that Universal Music Group Nashville has signed the Knights to a recording contract and will release their first single, “Pick Her Up,” to country radio on Feb. 3. The single features guest vocals from ’90s icon Travis Tritt. “He’s really our spirit animal,” Douglason told the crowd. Tritt also appears in the accompanying music video.

The Knights allowed Bentley to co-write and produce the single, even though the band’s lead guitarist, Marty Ray “Rayro” Roburn confided, “I didn’t want to have to be the one to say it, but we’re helping him out. Let’s just be clear here.”

Legendary disc jockey and songwriter Gerry House served as master of ceremonies. Before he brought the band out to the stage, he reminisced about how pivotal the Knights were to country music in the ’90s.

He conceded he wasn’t quite in shape for such lofty duties as the band had imposed on him. “I took a Xanax with a Red Bull,” he confessed, “and I may burst into flames.”

Continuing his walk down Memory Lane, House recalled how songwriters were screwed out of royalties back in the ’90s and how hard a time women artists had back then getting played on radio. “I’m glad those problems have been solved now,” he said.

While acknowledging he knew Bentley, House was no more charitable toward the singer than Roburn had been. “Dierks is what happens when you let a small child pick out his own name,” he observed.

In addition to Douglason and Roburn, the Knights are Trevor Travis, lead bass player; Terotej “Terry” Dvoraczeknyski, keytarist and fiddler; Barry Vanthey, steel guitarist; and Monte Montgomery, percussionist. The band still does much of its recording in “Trevor’s mom’s basement,” and several of the band members cited her as an ongoing inspiration.

Douglas said he detected base motives in Bentley’s eagerness to work with the band. “The ’90s are hot right now. He kind of wanted to ride the mullet.” He was similarly wary of Blake Shelton, who, he said, stole the idea of “Hillbilly Bone” from the Knights. “We’ve been singing about the bone forever,” he said.

Overcome by nostalgia, House wondered aloud if this focus on the ’90s meant that “they’ll bring payola back.”

The band’s publicists said they weren’t sure when or if the Hot Country Knights will have an album out. But the crowd was treated to four-song sampling of songs already recorded. It included “Pick Her Up,” a veritable how-to on drive-through romancing; “Mull It Over,” a paean to the historic hairstyle and those who live and die by it; “USA Begins With Us,” a tongue-on-cheek rave-up of every patriotic cliché in the book; and “Asphalt,” in which derriere double-entendre flower like rag weed (“It ain’t my fault, it’s the asphalt.”)

Pump up your hair, girls. The Knights are coming for you.