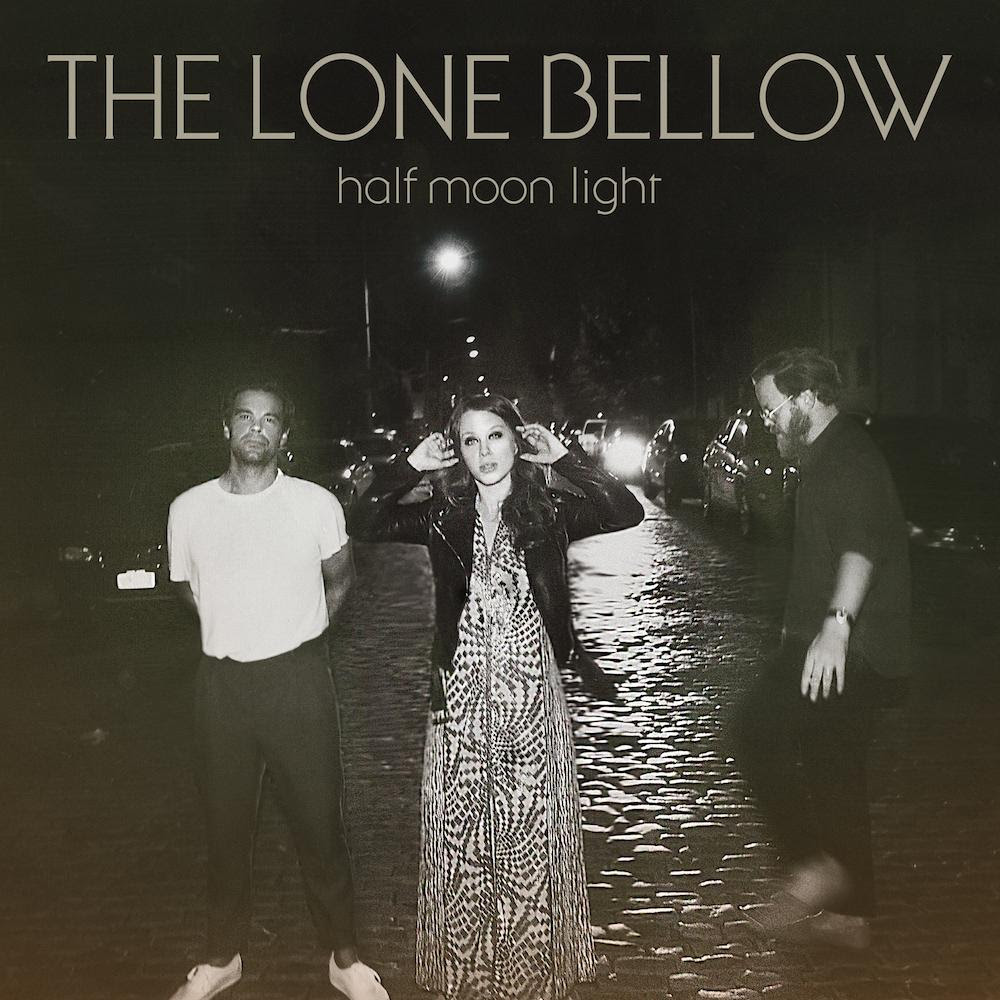 
The Lone Bellow’s new album HALF MOON LIGHT is out today. Produced by The National’s Aaron Dessner, HALF MOON LIGHT is the band’s fourth studio album and first new one since 2017. HALF MOON LIGHT is an artistic triumph worked toward for years, earned not by individual posturing, but by collective determination and natural growth. Recorded at Dessner’s Long Pond Studio in Upper Hudson Valley, NY and featuring guitarist Josh Kaufman and drummer J.T. Baites, the album finds The Lone Bellow pushing their acoustic storytelling prowess past new horizons, experimenting with textures and instrumentation to create their most sophisticated work to date.

“COUNT ON ME” VIDEO BELOW

With earthy three–part harmonies and songwriting as provocative as it is honest, the trio – made up of guitarist Brian Elmquist, lead vocalist Zach Williams, and multi–instrumentalist Kanene Donehey Pipkin – creates sparks that make a stranger’s life matter or bring our sense of childlike wonder roaring back. With HALF MOON LIGHT, The Lone Bellow have returned, unified and invigorated with boundless ambition.

In mid January, the band unveiled a super-charged muscle-car lovin’ lyric video for their chart–topping new single, “Count On Me,” streaming now at the band’s official YouTube channel. They also recently appeared on NPR’s World Cafe for an incredible 30-minute live performance.

“Count On Me” – which recently hit #1 at Americana radio outlets nationwide, with spins on over 70 Triple A and Americana stations across the country – is but one indelible highlight of HALF MOON LIGHT. The album also features the rousing “Good Times,” a song that garnered an exclusive premiere via Billboard.

The Lone Bellow have already started playing shows in London and New York in celebration of HALF MOON LIGHT, and will begin an extensive North American tour on February 26 in Houston, TX, that ends with their first–ever headlining show at Nashville, TN’s historic Ryman Auditorium on April 24. A European tour begins May 1. Next week, the band will host a two-night-stand at Los Angeles, CA’s famed Troubadour on February 12 and 13. Additional European tour dates and an array of festival appearances are also slated.

“[The Lone Bellow’s] music is better than ever…Their three-part harmonies, bright horns, and clear gaze at all that has happened—the good, the bad, the painful, and the loving—does it. Soul music in its more pure form, Half Moon Light is an album of all; of life itself.As they sing on ‘Martingales,’ what a sound.” -Esquire

“Across Half Moon Light, The Lone Bellow venture outside their usual musical box, alongside producer Aaron Dessner, to provide richer, poppier, and bolder textures. Yet it is never at the expense of their lyrical bite. Despite all the pain and suffering they and others have endured, showcased here in a stunning display…Never once do they lose their sense of wonder.” -American Songwriter

“[Half Moon Light] is The Lone Bellow’s most profound and dynamic LP since their formation nearly a decade ago…Leaving behind the tried-and-true elements of past albums, the trio sheds any folk monikers left over from 2017’s Walk Into a Storm and offers fans an album that could fill a football stadium as much as it could set the mood in a quaint local coffee shop. Though the folk music may be in the background, what hasn’t been lost is The Lone Bellow’s unparalleled energy, which is found deep in the grooves of every single track.” -No Depression