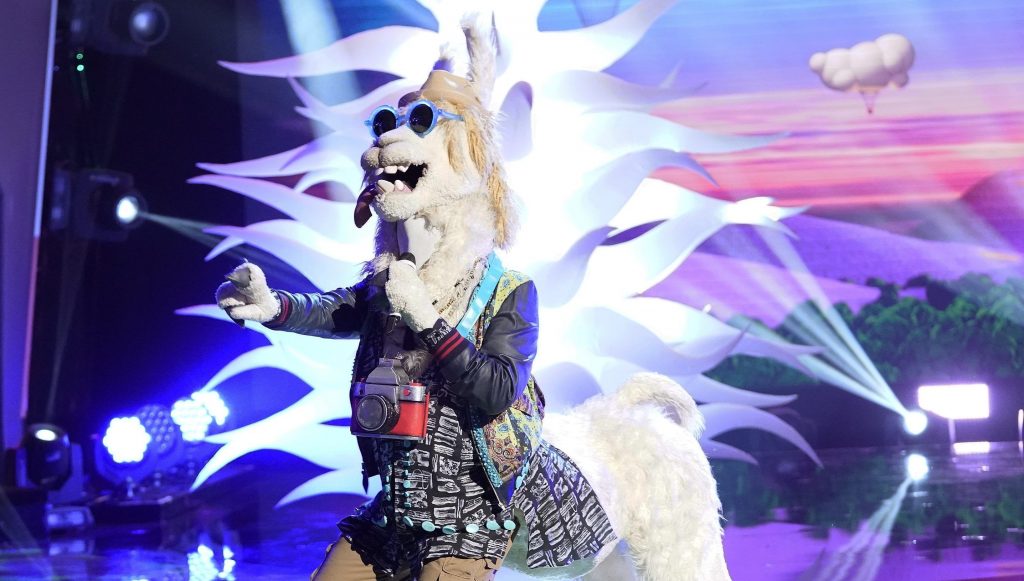 The Llama pulls the wool over everyone’s eyes [Video]

I’m talking about the Season 3 Masked Singer premiere, of course. What did you think I was referring to? I mean, did anything else of note happen Sunday?

Anyway, on Sunday’s big premiere, the Robot was demasked to reveal the grinning and copiously tattooed face of hip-hop luminary Lil Wayne. Weezy exited the competition way too early, but not before he entertained us all with an animatronic entrance to the theme music of Styx’s “Mr. Roboto” and with his raspy and recognizable rendition of Lenny Kravitz’s “Are You Gonna Go My Way?”

This wacky Wednesday, the brain-boggling series settled back into its regular timeslot, as the Group A Playoffs continued apace… and sadly, yet another worthy contender went his way, way too soon.

Yes, the drama was saved for the Llama, who — despite delivering an impressive cover of Tom Jones’s “It’s Not Unusual” that had judge Jenny McCarthy telling him, “You upped your game!” — was given the old hoove-ho at the end of the episode. But the Llama did manage to pull the wool over all of the judges’ eyes, because none of them guessed that he was… comedian and TV host Drew Carey.

Wow. Who knew Drew could sing like this? The price may be right…but this verdict was so, so wrong. Carey should have advanced. I wish he could have at least hung around long enough to cover Ian Hunter’s “Cleveland Rocks.” Damn it! And he had one of the best costumes of Season 3, too.

It’ll be a couple weeks before we meet this super-sized season’s other dozen contestants, comprising Groups B and C (though I’m telling you right now, if the Taco performs and doesn’t do “Puttin’ on the Ritz,” that’ll be another major missed opportunity). But let’s review this Wednesday’s four surviving celebrities, and keep the guessing game going.

This fabulous furry crooned the Bobbie Gentry classic — not the Iggy Azalea banger, although that would have been cool as well, because she really possesses a rich, lovely, textured voice that’d work with just about any song. I definitely have my eye on this one.

The clues: Last week, Miss Monster made references to hairspray and her crush on Season 1 winner T-Pain. She also worried aloud, “Will you still love me without knowing my name?” This week, she dropped more clues about “queens” and “royalty.”

My guesses: Last week, I thought this might be P!nk (though she seems far too A-list for this show, she is the type who’d do it to amuse her kids — which is why Parents of the Year Lil Wayne and Seal signed on). I also considered the possibility of Debbie Harry. Many people on social media believe it’s Missy Elliott. But forget about all that. This is either Hairspray star Queen Latifah, or R&B queen Chaka Khan, who once recorded “I Feel for You” by the royally monikered Prince — a song that mentioned her name, like, 45 times. It’s probably Chaka.

OK, so the Tiger is not Marky Mark. That much is clear. Though his performance could make him an honorary member of the Funky Bunch, his vocal was by far the weakest of the night. The Llama was robbed!

The clues: Last week, we got references to clam-shucking and Abraham Lincoln’s Gettysburg address. This week, the White Tiger mentioned a love of “block parties” and dancing, and there was a seemingly random skiing-cow sighting.

My guess: This is absolutely, positively dance enthusiast, New Englander, and tight end blocking legend Gronk, whose NFL number is 87 (“four score and seven,” get it?). And if that bovine-on-skiis clue threw you off, that’s a Swiss sensation — likely a vague reference to Gronkowski’s Gronk Fitness Swiss Bar. The height is right, too: Gronk is 6-foot-6.

The Kangaroo, “Back to Black”

The Kangaroo’s performance had me jumping for joy. This was a surprisingly stellar vocal. Judge Robin Thicke even declared the Kangaroo the Season 3 frontrunner. Something tells me Amy Winehouse would get a kick out of seeing a jeweled marsupial doing such a fab job with her iconic track.

The clues: The Kangaroo once again talked about battling her demons and haters in the public eye, being vulnerable, and yearning to get “back in the game.” Visual clues included a basketball and makeup. She also mentioned a “little ‘roo.” Is the Kangaroo a mom?

My guess: The internet seems to think this is Jordyn Woods, but I don’t think Woods can sing like this. So I am going to stick with my guess from last week, Iggy Azalea, who’s no stranger to makeup (she often casts perfectly painted drag queens in her music videos, and she’s done online cosmetics tutorials) and was once engaged to basketball star Nick Young. The “little ‘roo” clue still has me confused, but there are rumors that Iggy is pregnant… and if she is, well then, going on The Masked Singer while wearing a pouch would be THE coolest way to announce that.

The judges seem to think this is a rocker in disguise, but there’s no way a voice as pristine and smooth as the Turtle’s isn’t boy band-trained (or maybe American Idol-trained). It is too early to predict a Turtle/Kangaroo finale showdown?

The clues: Last week, the Turtle described his slow-and-steady “step by step” approach to his “dream” career, while visual clues included a surfboard and BBQ-grilling. This week, he talked about wanting to rebel against his image, acting, and “hunting for booty.”

Judges’ guesses: AJ McLean, Billie Joe Armstrong, Zac Efron, Darius Rucker, or someone from the Red Hot Chili Peppers — all terrible guesses, even by Ken Jeong standards! (Seriously, there is a better chance of the Turtle being Bjork than it being Anthony Kiedis.)

My guess: Every season, the judges think one of the male mystery singers is Billie Joe from Green Day. This season, there’s a little more to that theory — the “green’ color, the spiked hairdo, the leather jacket… and the fact that Armstrong has a new Green Day album dropping in just two days. And what better way to promote Father of All... than by crooning a James Arthur wedding ballad while dressed as a teenage mutant ninja Turtle, right? But I don’t think this is Armstrong. Last week, I thought it might be a member of Step by Step band New Kids on the Block, but the internet has since convinced me that it is former Dream Street member, avid cook, Teen Choice surfboard-shaped-trophy winner, Summerland actor, and (if the lyrics to his song “Body Language,” a duet with T-Pain, are indicative of anything) avowed booty-man, Jesse McCartney.

Next Wednesday, the Turtle, Kangaroo, White Tiger, and Miss Monster will sing one more time for a chance to compete against the Group B/C contestants in the semifinals. Come back then and join the masquerade.