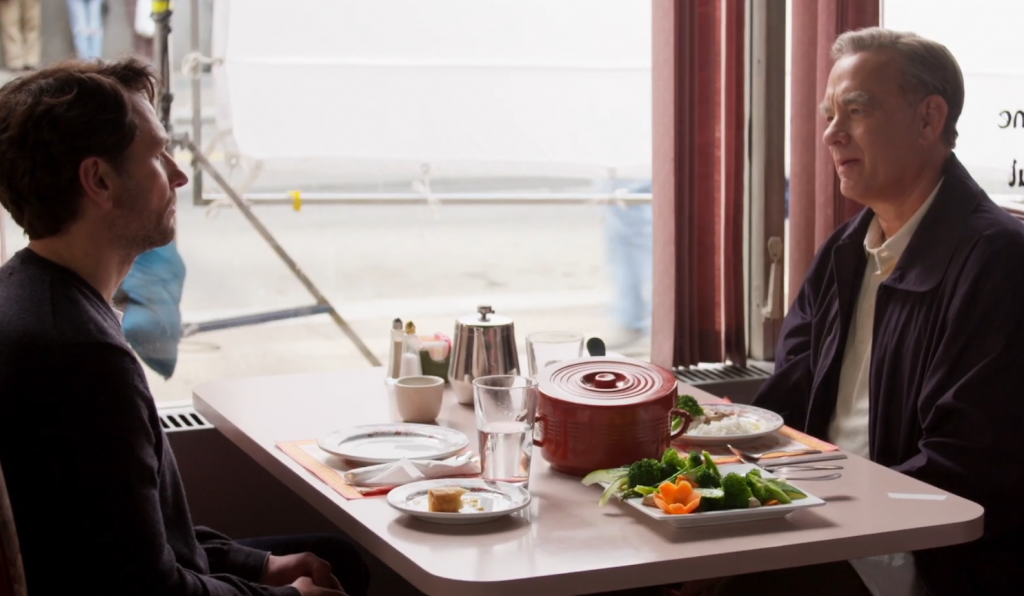 
As movie viewers, we are trained to focus on the characters at the forefront of any given scene. That’s why the extras who surround the main players are barely noticeable — and in the production industry are simply referred to as “background.”

But in the Oscar-nominated Mister Rogers drama A Beautiful Day in the Neighborhood, the filmmakers enlisted a very specific set of background actors to give one particular scene special meaning.

As revealed in the exclusive clip above from the home entertainment release of A Beautiful Day in the Neighborhood (which Yahoo Entertainment can exclusively announce will be available on 4K Ultra HD, Blu-ray and DVD on Feb. 18), the Chinese restaurant scene between Fred Rogers (Best Supporting Actor nominee Tom Hanks) and journalist Lloyd Vogel (Matthew Rhys) is loaded with cameos from people who were close to the late children’s entertainment host in real life.

So as Fred tells Lloyd, “Let’s just take a minute, and think about all the people who love us into being,” the phrase has added meaning. Among those populating the restaurant: Fred’s widow, Joanne Rogers; his right-hand man Bill Isler; longtime Mister Rogers’ Neighborhood producers Hedda Sharapan and Margaret Whitmer; and actor David Newell (Mr. McFeely).

“All these people who were part of the Fred Rogers neighborhood are there, ” said Hanks.

“Most people, when they see that seen, they’ll have no idea,” explained producer Peter Saraf. “Those’ll just look like extras. But for those of us who know and love those people, it’s really special.”

A Beautiful Day in the Neighborhood his 4K UHD, Blu-ray and DVD Feb. 18.

Watch screenwriters Noah Harpster and Michah Fitzerman-Blue share more stories from the making of the film: