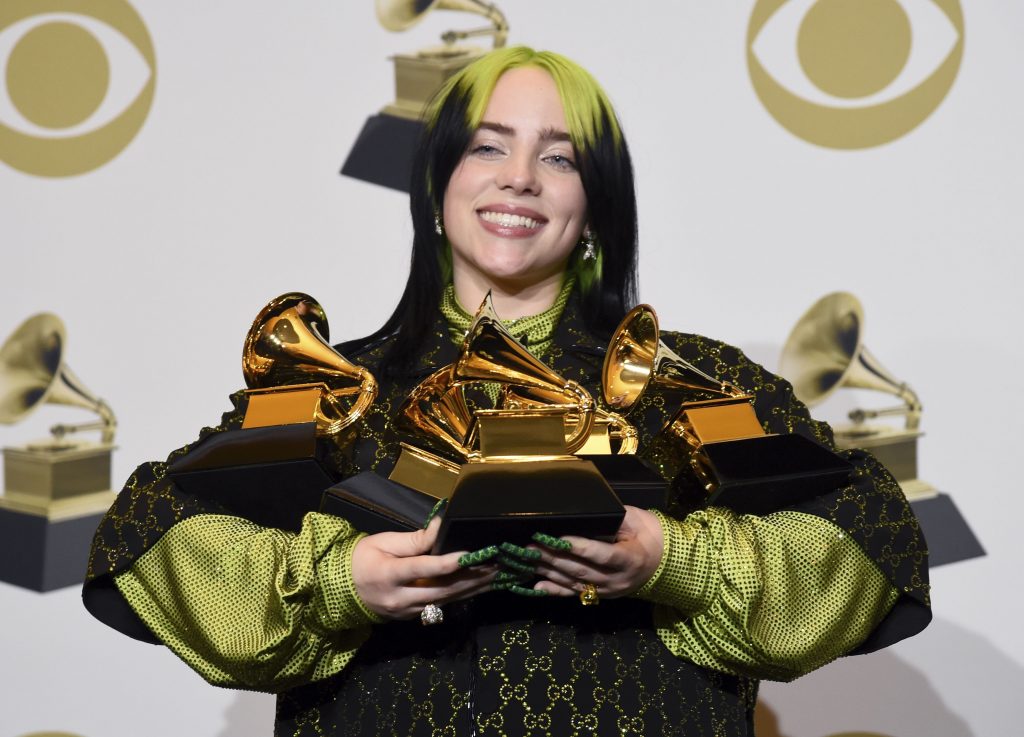 
The buzz leading up to the 62nd Annual Grammy Awards was centered on the scandalous ousting of Record Academy CEO Deborah Dugan, but by the time the awards actually took place Sunday, the focus had shifted. Instead, everyone inside Los Angeles’s Staples Center was cheering for Billie Eilish, grieving for Kobe Bryant and Nipsey Hussle… and wondering if Aerosmith would ever be allowed on live television ever again.

Here are the highs, lows, and head-scratchers of music’s biggest, strangest night.

On Sunday, the goth-pop superstar, who just turned 18 last month, became the youngest Album of the Year winner ever — breaking the record previously held by Taylor Swift, who was 20 years old when she won for Fearless a decade ago. But even more astoundingly, Eilish became only the second artist in Grammy history, and the first female artist, to sweep all of the “Big Four” awards (Record, Album, and Song of the Year, plus Best New Artist) in a single ceremony — a feat that even past Grammy darlings like Amy Winehouse, Adele, and Sam Smith had failed to pull off in recent years.

“Thank you to the Recording Academy,” said Eilish’s producer, co-writer, and brother, Finneas O’Connell — who, at age 22, also made Grammy history as the youngest recipient of the Producer of the Year, Non-Classical award (for his work on Eilish’s debut album, When We All Fall Asleep, Where Do We Go?). “Thank you again to our team, our family, to the people that have supported us from the beginning. We didn’t write a piece for this. We didn’t make an album to win a Grammy. We wrote an album about depression, suicidal thoughts, climate change, and being the bad guy, whatever that means. We stand up here confused and grateful.”

That one other artist who won the “Big Four,” 39 long years ago? It was soft-rocker Christopher Cross… whose career went downhill soon after the 1981 Grammys. “I don’t think that sweep did him any favors. It kind of put a target on his back, and I would hate for something like that to happen with Billie,” Billboard’s awards editor and Grammys expert, Paul Grein, tells Yahoo Entertainment. “Nobody needs too much success and acclaim; it creates a backlash and inevitably makes people turn against you.” (Eilish’s Grammy sweep is a “low” for Cross as well, in a way, as he is officially no longer the definitive answer to a Trivial Pursuit question.)

HIGH and LOW: A heartbreaking tribute in the “house that Kobe built”

“We never imagined in a million years we would have to start the show like this. Never, never, never, never, never,” host Alicia Keys said at the top of Sunday’s ceremony, only a few hours after news had broken that Kobe Bryant and his 13-year-old daughter, Gianna, had died in a helicopter crash. The mood inside the Staples Center — home of the Lakers, for whom Bryant played for 20 years — was understandably somber, but Keys and Boyz II Men rallied to pay beautiful, tasteful tribute to the basketball superstar with an a cappella rendition of “It’s So Hard to Say Goodbye.” At the end of the tear-jerking performance, the camera chillingly panned up to Bryant’s illuminated Lakers jerseys displayed on the Staples Center wall.

Earlier this month, estranged Aerosmith drummer Joey Kramer sued his bandmates of 50 years in an attempt to be allowed to perform with them at this Sunday’s Grammy Awards; the judge, however, ruled against him. But now, Kramer must be heaving a sigh of relief. Aerosmith’s shambolic, creaky number was plagued by horrific sound issues and seemed totally unrehearsed; even the charismatic Run-D.M.C., who joined in for “Walk This Way,” could not salvage this embarrassment, because Rev Run and Darryl McDaniels sounded like they were singing an entirely different song. And the train(wreck) kept a rollin’, when off-key Aerosmith frontman Steven Tyler awkwardly pulled two unenthusiastic ladies onstage and tried to persuade them to do the side-to-side “Walk This Way” choreography. He should’ve just brought up Flavor Flav instead; the Public Enemy hypeman’s wild audience dancing was really the only enjoyable thing about this debacle.

HIGH: Tyler, the Creator is on fire

This Tyler delivered a much more exciting rap-hybrid performance. Taking the stage with a troupe of Sia-wigged Tyler clones (reminiscent of Eminem’s iconic VMAs number from 2000), Boyz II Men, and Charlie Wilson, the enigmatic Odd Future rapper brought the drama and fire with his brilliantly bonkers performance of “Earfquake” and “New Magic Wand.” Additionally, while many pundits were outraged when Tyler’s Igor was not nominated for Album of the Year, that snub was avenged when Igor won the Best Rap Album honor later in the night.

HIGH: Lil’ Nas X and friends ride till they can’t no more

If you’d told us that Lil Nas X’s “Old Town Road” performance with Billy Ray Cyrus, BTS, Diplo, Nas, Young Thug, and preteen Walmart yodeler Mason Ramsey would be a more entertaining and successful cross-genre Grammy collab than Aerosmith with Run-D.M.C…. well, we would’ve called you crazy. But this was crazy-good, and a ton of fun. There was so much going on here that we half-expected to see a kitchen sink onstage next to that giant slime-green neon skull, but somehow, this totally worked.

Another gone-too-soon Los Angeles legend, this four-time nominee finally won a Grammy — 10 months after his massive memorial service was held at the same venue, the Staples Center. As his family accepted his Best Rap Performance award for “Racks in the Middle” at the pre-telecast Premiere Ceremony, his grandmother thanked the crowd for the outpouring of love over the past year, while his brother, Samiel Asghedom, noted that when Hussle lost at last year’s Grammys, he’d hoped to be back. “God’s plan is God’s plan,” Asghedom said bittersweetly. Later on the live telecast, Nipsey’s single with DJ Khaled and John Legend, “Higher,” won Best Rap/Sung Collaboration, and Khaled, Legend, Kirk Franklin, Meek Mill, Roddy Ricch, and YG performed an emotional tribute to Hussle.

Unlike Hussle, 61-year-old country legend Tucker lived to give her long-overdue Grammy acceptance speech — two speeches, actually — when, after 14 nominations, she finally won. Tucker, who picked up trophies for Best Country Song (for “Bring Me My Flowers Now”) and Best Country Album (for the aptly titled While I’m Livin’) on the pre-telecast, gushed, “After almost 50 years in this business, after many dreams, it’s still unbelievable to me that I’d still have a few ‘firsts’ left. … I just want to say, no matter how young or old you are, never stop following your dreams.” Tucker also sweetly told Shooter Jennings (son of Waylon), who produced the comeback album with Brandi Carlile: “Your daddy’s up there with mine right now, and he’s really proud of us.” A beaming Carlile added, “Me and Shooter asked Tanya why she hasn’t made an album in almost 20 years, and she said it was because when her mom and dad died, she just couldn’t anymore; she thought that meant there was more love behind her in her life than ahead of her. And she knows that is not true right now.”

Fans were delighted to learn that exquisitely talented chanteuse FKA twigs would be included in a Prince tribute led by Usher and featuring drummer Sheila E. But then she was relegated to Vanity 6-style backup dancer status — spending most of her stage time clinging to either a pole or Usher’s leg, and never once getting near the microphone. While her aerial skills were indeed impressive, this weak number squandered her true talents.

of course i wanted to sing at the grammys. i wasn’t asked this time but hopefully in the future. none the less what an honour. congratulations to all winners x

The 27-year-old pop powerhouse gave her first live performance since her 2018 drug overdose, of a new ballad, “Anyone,” that presenter Greta Gerwig said Lovato had recorded just “four days before an incident that almost took her life. …. Tonight, she’s here to share her voice with all those who are battling the darkness in their lives, so they might be reminded there is light on the other side.” While Lovato was so overcome with emotion that she had to stop and start over during the first verse, this performance was still a triumph that earned Lovato a standing ovation.

At Saturday’s Clive Davis gala, Sean Combs blasted the Recording Academy for discrimination within the organization, as did a “conflicted” Tyler, the Creator backstage in the Grammy press room. But only bluesman Clark, who won two Grammys on Sunday, dared to go there on the live broadcast — with his ferocious diatribe against racial injustice, “This Land,” backed by the Roots. CBS beeped out large chunks of his lyrics, but that barbed line about “Trump country”? That stayed in.

Reminder: this Gary Clark Jr. song came out of him buying property outside of Austin and the racist neighbors not believing he could possibly be the rightful homeowner. #GRAMMYs

Viewers probably thought Cabello’s “First Man” was aimed at her high-profile boyfriend, Shawn Mendes, but it turned out she was singing to her dear old dad — who was seen sobbing and glowing with pride, once the cameras finally panned to the audience. It was a sweet surprise moment, and a refreshing change of pace after all those staged, steamy Cabello/Mendes duets at every other awards show over the past year.

The renowned DJ won Best Remixed Recording for her “I Rise (Tracy Young Pride Intro Radio Remix)” for Madonna; this marked the first time a female producer had ever been nominated, let alone won, in this category. “Together, in a male-dominated industry, I proudly accept this on behalf of all female producers who have been overlooked,” Young declared through tears.

Yes she can! The former first lady took home the Best Spoken Word Album honor for her audiobook Becoming, beating out opponents as disparate and formidable as John Waters and the Beastie Boys. When Obama wasn’t there to pick up her trophy in person, grinning Premiere Ceremony presenter Esperanza Spalding said with a chuckle, “I will gladly accept on her behalf!”

LOW: The Grammys waste the chance of a Lifetime

Legends Chicago, Roberta Flack, Isaac Hayes, Iggy Pop, John Prine, Sister Rosetta Tharpe, and Public Enemy all received Lifetime Achievement Awards from the Recording Academy… but aside from a frustratingly truncated Prine tribute by Bonnie Raitt, none of the other honorees received more than a passing montage mention between commercial breaks. And that was a real shame. As mentioned above, this telecast really needed a lot more Flavor Flav.