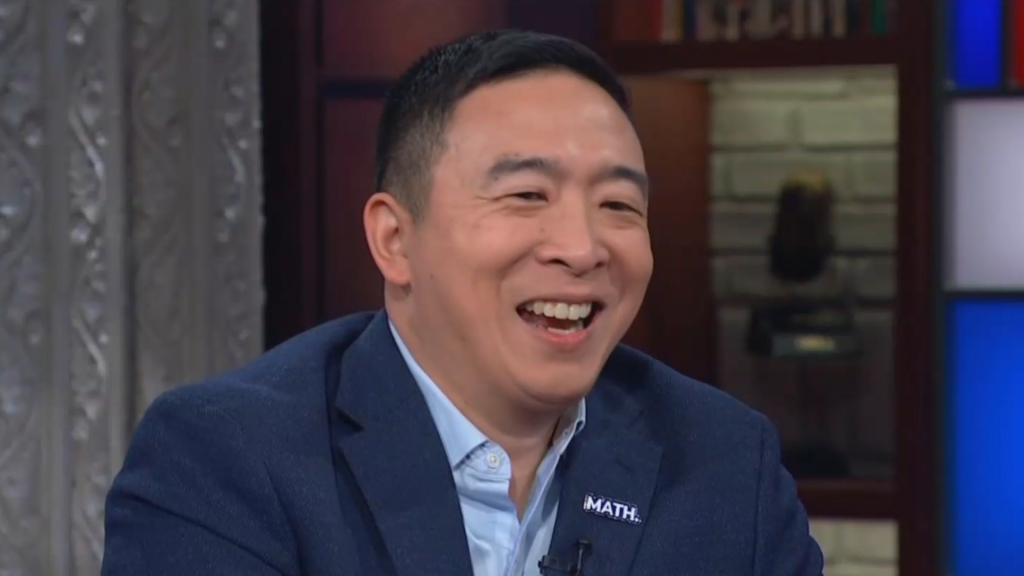 Andrew Yang joined The Late Show With Stephen Colbert Wednesday night where he mocked CNBC for putting a picture of the wrong man next to his name in a graphic. This comes not long after MSNBC had to apologize to Yang for calling him John. In this latest flub, CNBC put a picture of venture capitalist Geoff Yang in place of Andrew and have since apologized.

“They had a public apology some number of hours later after it was called to their attention,” Yang said. “I think that’s about the twelfth apology I’ve gotten from a media network.”

Yang said that he and Geoff had messaged each other since this occurred, but he doesn’t know much about him.

“Geoff Yang is a venture capitalist in California who is a very handsome man,” Yang said, “and, um, that’s about all I know about him honestly.”

But this whole debacle gave Colbert an idea.

And Yang could already see the benefit of a Yang/Yang ticket.

“Well one of the great things then,” Yang said, “If I didn’t want to attend an event and he went…” “CNBC wouldn’t know the difference,” Colbert said finishing Yang’s thought with one last knock on CNBC.

In the same graphic, CNBC also had a picture of former candidate Kirsten Gillibrand in place of Tulsi Gabbard.

The Late Show With Stephen Colbert airs weeknights at 11:35 p.m. on CBS.

Check out why #CNNisTrash was trending for perceived bias against Bernie Sanders at Dem debate: