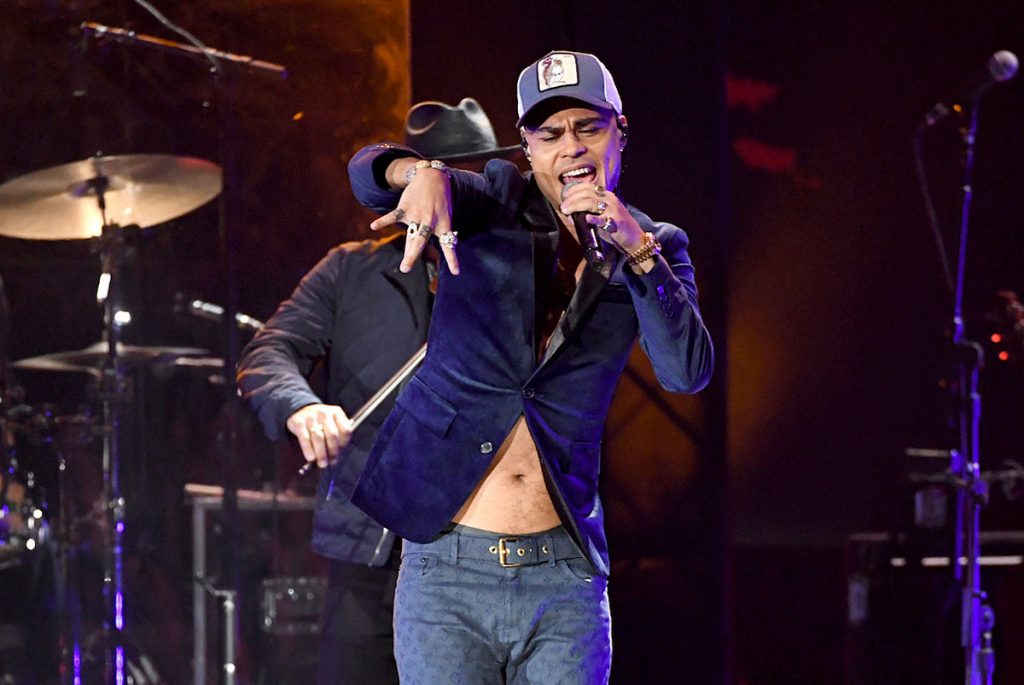 
On every level, Shy Carter‘s just-released The Rest of Us EP innovates. Both sonically and thematically, the eight songs on the collection thoughtfully stretch and challenge the borders of the country genre, introducing elements of soul, R&B and pop that not only showcase the singer’s love for those different stylings, but also his deep knowledge of how they can be braided into a traditional country sound.

One small detail that exemplifies Carter’s musical blend pops up in the song “Hurry,” where he includes the lyric, “Hurry your pretty ass back to me.” It might seem like an afterthought, but for a songwriter as experienced as Carter, the inclusion of the word “ass” is no accident. Even five or ten years ago, the expletive would have made the song a little too sexy for country’s more conservative audiences, and would likely not fly on country radio airwaves.

“I definitely thought about taking it out,” Carter tells Taste of Country with a chuckle. “And I was kinda just joking when I started singing it in the song, but the writers I was writing with were like, ‘Man, that’s cool. That kinda makes it sexy, and makes it what it is.'”

Ultimately, he adds, he decided to keep the word “ass” in the lyric, because that’s what felt truest to the song’s message. “And you know, when I sing it live, I usually don’t say it that much, depending on who’s in the audience. But it just felt good,” he explains.

That one word might seem like a silly, small plot point in the grand scheme of Carter’s vision for his album. But it’s representative of something much larger: The singer sees the country genre growing and broadening, and some of the hitmakers who have influenced him the most are those who’ve helped extend and reshape the boundaries of what country music is.

All the elements of Carter’s brand of country music have long existed in the genre, he goes on to say.

“I always noticed a serious soulful element in country music. That’s what drew me to it. It was stuff like Chris Stapleton, Larry Fleet. You know, Ryan Hurd‘s got a little R&B flavor. Caitlyn Smith is one of my favorites, too. Billy Currington, Zac Brown Band, those kinds of artists,” he lists.

“That was the type of stuff that made me gravitate towards country music. I just wanted to give a little bit of how I feel about it, my little take on everything,” the singer adds. “And I like all the different flavors going on in the country world right now.”

Make no mistake: Carter is a longtime student of traditional country music, and he’s been a part of the genre’s songwriting community for over a decade. He co-wrote Sugarland‘s 2010 single, “Stuck Like Glue,” a massively popular hit that also surprised some listeners with its reggae-pop elements. Since then, Carter’s worked with country mainstays including Tim McGraw, Faith Hill, Keith Urban and Kane Brown.

And for as much R&B and soul fans hear in The Rest of Us, there are plenty of mainstream country sounds on the tracklist, too. The project’s current single is “Beer With My Friends,” a singalong bar anthem that features Cole Swindell and David Lee Murphy. As a longtime fixture of the country community, Carter doesn’t have anything to prove, but in that song, he demonstrates that he can put out a radio-ready earworm as easily as he can put out a more genre-challenging song like “Hurry.”

Then there’s the album’s title, taken from one of the songs on its tracklist. Carter chose “The Rest of Us” as the title track of the record because of its overarching message: He wants his music to celebrate people from all walks of life, even — and perhaps especially — those who don’t have it all figured out.

“We all make mistakes. I’ve made a lot of mistakes,” he relates. “But God’s grace is so beautiful and it’s so awesome that through all the bad decisions I’ve made, or what seemed to be bad, I’m still able to flourish. You know, that grace is so powerful and important. Just, people being there for you, to help you make it through.”

That’s a sentiment that’s deeply rooted in country music’s core values, a classic and time-tested message that you could just as easily find in the catalogs of George Strait, Reba McEntire or Garth Brooks. Time and again on Carter’s record, he proves that that sentiment, and the innovations that come along with it, are country to the core.

“So I wanted to say that this album is for the rest of us,” he continues. “This is for the ones that ain’t got it all together, man. That are just taking it day by day.”