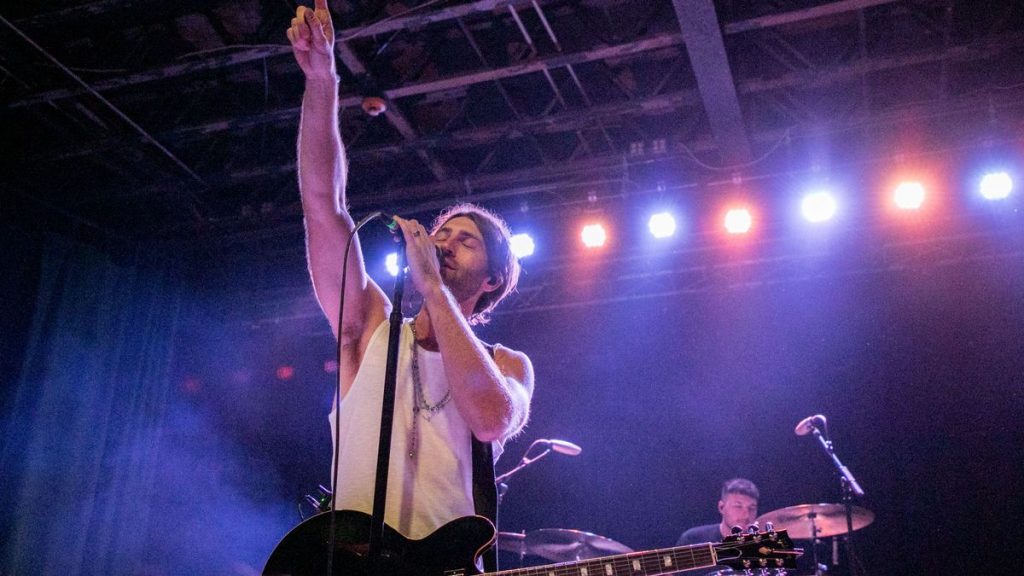 There’s usually a little bit of down time between an artist’s sound check and the actual show, and on Thursday afternoon (Feb. 6), I had the chance to use that time wisely by talking with Ryan Hurd about everything going on in his music, his new goals, and his life with his wife Maren Morris.

We sat down at Nashville’s Cannery Ballroom, before the sold-out crowd arrived and packed the place. The show was, in some ways, just another stop on his Platonic tour. But then again, Hurd considers Nashville his hometown now, and hometown crowds just hit different.

CMT.com: I know you’ve come to think of Nashville as your new home, so it probably feels different to play for so many people you know so well. Does it feel different in a good way, or not so good?

Hurd: Well, your whole record company is here, and all the people you work with, so that just makes it feel like it’s less of a party. But you definitely kind of measure yourself against these shows. Like last year we did the Exit/In and sold that out. And tonight we’re doing the Cannery — which is at least two times as big — and we sold this out. When your record company gets to see you do that, you can kind of mark your progress with Nashville shows. So this is really gratifying.

Do you do anything differently with the vibe of the show, considering the audience?

No, but you have to keep in mind that you’re working two things at a show like tonight’s: a crowd that actually just came to see you perform, and then the labels, the publishers and the agents. In fact, there are some artists who don’t even play Nashville because of that. Miranda (Lambert) hadn’t done it in like six years. Maybe eight years. Because it’s a lot of work. And yet this was the first date we booked. We’ve played shows on this tour before this one, so now it feels like the rehearsals are over and let’s go do this.

And now you’re the one going on last, after Joey Hyde and Niko Moon. After being on some pretty big tours as an opener, it must feel way different when you’re headlining. Tell me about that.

It’s scarier, for sure. Like even with ticket sales. I still don’t think anyone’s gonna come tonight. They bought tickets, sure, and it’s sold out, but I’m still like, “Man, what if they found something better to do?” But I think our show itself is so cool. When you open for people, you’re doing a very specific job and you can have those moments with crowd with a hit song that connects. But you’re just there to warm the crowd up for someone else. So when it’s your own crowd — whether it’s 200 or 20,000 people — there’s nothing like that. You don’t have to win them over. You just have to show up and be yourself and play the songs they already know and love. The people who come tonight will know every single song I’ve put out, not just “To A T.” So the ones here tonight are fans of my writing, my new songs and my old songs.

Ah yes. “To a T.” The sexiest song on the radio right now. Or maybe ever.

It is. And it’s really strange to me that my biggest hit so far isn’t slamming, you know? It’s not like a super uptempo one that hammers the crowd. It’s not super singalongable, if that makes sense. There’s no real place for the crowd to sing with you, and yet as soon as we start playing it, everyone’s phones go up and people get really excited. That is obviously really cool for me.

So then does it surprise you at all that that’s the song that is essentially your break-out hit, because it’s the first time you’ve climbed up into the top 20 on the radio charts?

I just figured out that I don’t know very much. This one came about because I listened to people around me, including Maren, who said it was a hit song. There were a lot of champions for “To a T.” The songs I thought would be massive hits weren’t, so now I’m really tuned into my team’s reactions to things. Or even when I play a demo for people who don’t work in the music industry and watch them react. I pay attention to that. Because it’s really easy to think that the smartest song has the most hit potential. But the reality is, people like simple music. Sometimes overthinking it kills the vibe.

You share a lot of intimate imagery in “To a T.” Was it hard to write such a revealing song because of how much you’re sharing about your life with Maren? Or did some of those lines comes from your co-writers Jerry Roe, Nathan Spicer and Laura Veltz?

I know it doesn’t sound like anything else, and that might be why it’s the smartest song I’ve ever written. I say smartest in that it’s very technical the way we had to write that chorus with all the word play and the rhythmic part. It was like doing a hard math problem. It took us a while to get it right, but we knew it was special when we were chasing it down. It really is like a table setter for us: it gets us to the next thing in a really special way. And however long it stays on the charts, it proves that when my songs are on the radio, people listen. It’s cool to have that song as a foundation. It takes a long time for new artists to get all the way up the charts, so I feel really blessed by everything that song has opened up for us. It’s a gold record. And not a lot of songs get to be that. That was my one goal when I signed my record deal: I just wanted a gold record. And now I get to come up with new goals.

I’ve never written a song, so I guess I never realized it would be that technical. But we’ve talked before about how much you were influenced by Brad Paisley, and I do feel like writing double entendres into country songs is a lost art. Do you agree?

Paisley definitely created kind of a sub-genre by being tongue in cheek with country music, and that’s not quite as in vogue anymore. But at same time, hook-based songwriting is what country music has always been about. You try to get there, but writing songs is so hard. And finding an edge and an angel. “To a T” was a really difficult song idea that we knew we were gonna have to dig into, and when you find that edge, it makes it special. As much as the sound may change in country music, that lyrical foundation is always what it’s going to be about. Like I have no idea what Sam Hunt’s new record is gonna sound like — I hear it’s pretty country — but I don’t honestly care. I know it’s gonna be a country record because I know that lyrically, it’s gonna be there. That’s what I always come back to.

Right around the time your tour wraps, that’s when the real show begins: when you and Maren become parents. What has your dad taught you about fatherhood?

He was always just so present. He’ll even be here at the show tonight. My mom and dad both live down here now, and even though you say that you’re going to do things differently when you have kids of your own, my parents have always been really present and supportive. That’s how I want to be. I just would love to be as present as my dad has always been for my own child. They drove me down here to go to college, thinking I was gonnna work in country music. But then I got a sociology degree. It’s not what they expected, but they were still supportive. And here I am circling all the way back to doing what I always wanted to do for work and for a vocation.

To quote that old Faith Hill song, a baby changes everything. Are you expecting the chaos that can come from welcoming a little one into your world?

Maren and I are very busy people, but it feels like we’ve got some semblance of control over our lives right now. When you’re first starting out in country music, you’re at the mercy of the calendar and you have no control over where you’re supposed to be. People fill up your day with work. That’s just what it takes at the beginning. But now we both have it reined in in a really special way. We don’t feel like we are missing out and we don’t feel like we have to say yes to everything. It’s a really healthy way to bring a kid into this whole circus. We’re still gonna do our jobs and write songs and play shows, but we’re gonna have a life. I feel like we’re both really ready.

Hurd’s next stop is tonight (Feb. 7) in Memphis.