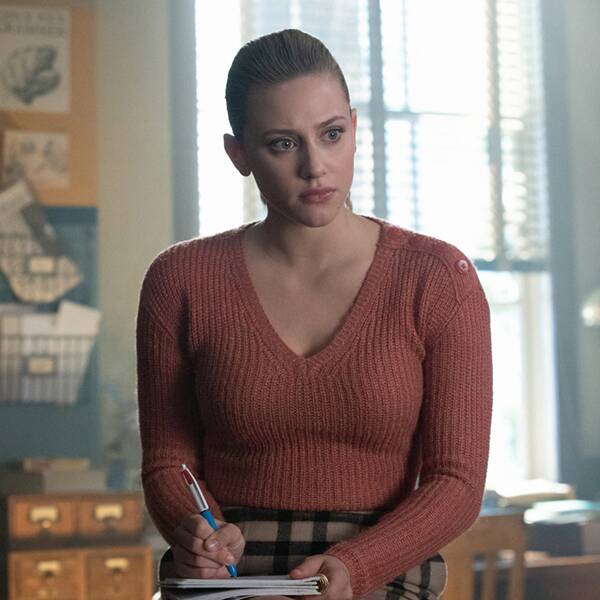 Welcome back, friends, to the most deranged show on TV.

In a shocking turn of events, tonight’s Riverdale was about things that are actually high school-related. Sure, Veronica’s still making and selling rum (that admittedly sounds kind of delicious), but other kids are playing football, fighting for control of the cheerleading squad, and writing articles for the school newspaper.

Yes, of course there’s an evil plot on the Stonewall Prep football team to play as violently as possible (the more violent, the more the coach will pay you), and yes of course the cheery football article Betty was supposed to write turned into an unpublishable expose, and of course all of this required Veronica to go undercover at a football party, where she served them her delicious-sounding rum, and only uncovered the secret fact that Jughead had joined his school’s secret society and it was even a secret from Betty.

“I didn’t tell you, because it’s a secret society.”

Sir, do you know what show you’re on? There’s no way any secret society on Riverdale is possibly good news, even if it did get you a somewhat shady book deal.

Archie also looked to his newly appeared uncle for comfort and help, which pissed his mother right off. Apparently Fred had once covered for his brother and got a DUI on his record, and he’s not Archie’s new parent, and now Archie’s grounded, but obviously he can still play in the all-important football game.

Riverdale then lost that all-important football game to Stonewall, but Betty decided she’s going to try to beat them in a trivia competition instead, and Jughead learned both he and evil Stonewall captain Brett both got into Yale, which was an awkward thing because Betty had not gotten into Yale, but she can still kick ass at a trivia competition.

But then, we got a flashforward to later in the year, when apparently Jughead has been murdered. Betty’s in Jug’s empty dorm at Stonewall, crying over a box of his stuff. Brett comes to the door.

“Save your tears. No one’s watching,” he says. “You got your wish, Ponytail. Forsythe isn’t going to Yale, so I guess it’ll just be me and you in New Haven.”

Congrats to Betty for eventually getting into Yale after all?

Another thing that happened is that Veronica’s dad, a constantly confusing figure, decided to sue his daughter for patent infringement because her rum is too close to his rum, so she solved that problem after licking a delicious maple-flavored snow cone courtesy of Cheryl. She’s gonna mix her rum with Cheryl’s maple syrup, creating something very sticky that “tastes like money.”

At some point over the past few seasons, we switched from rooting for these teens to worrying about them, and wishing their parents were a lot less evil and out of touch and doing a lot more actual parenting because there are a lot of genuinely concerning things going on. For instance, we can’t help but agree with Principal Honey and the new cheerleading coach he hired that Cheryl is not equipped, mentally or just in general, to run a whole team of cheerleaders.

We have seen Cheer. We know how hard that is to do! (Though like, would Cheryl even make mat?!)

Anyway, next week’s episode is a Betty and her team facing off against Brett and his team in a quiz competition and we’ve got to wonder where we are and how we got here and what and why is any of this happening and can it never stop? Love you, Riverdale. Never leave us again.

Keep up with all the Jughead-is-dead clues below.

Riverdale airs Wednesdays at 8 p.m. on The CW.