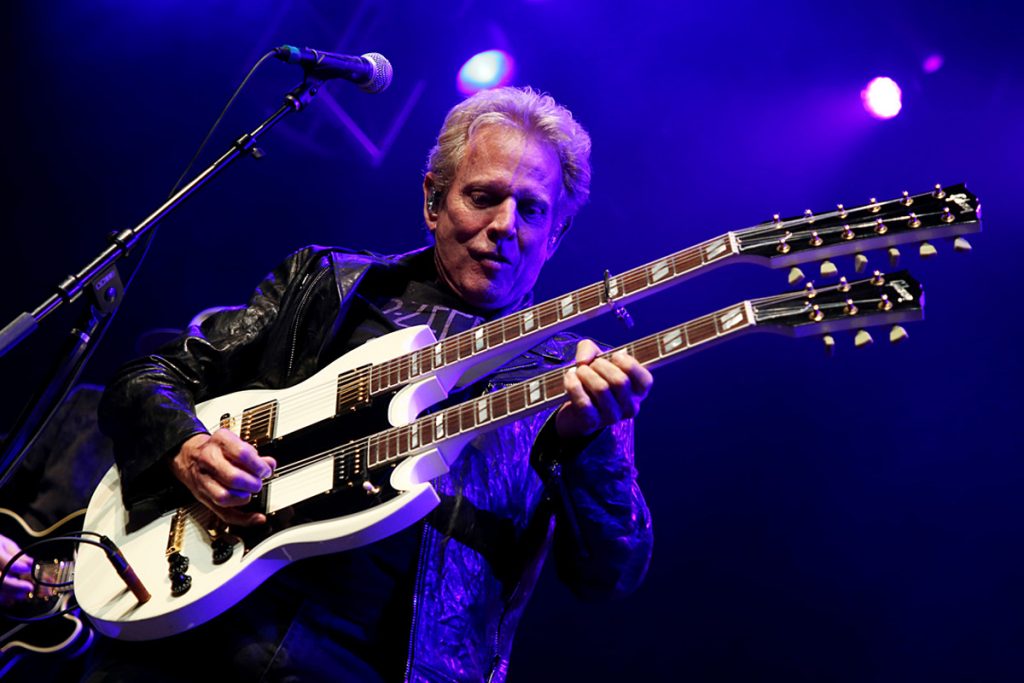 
The Eagles have seen quite a few lineup changes over the years, but few of them shook the band up quite like guitarist Don Felder‘s departure. Felder was fired from the band on Feb. 6, 2001, touching off a series of events from which his relationship with the other musicians would never recover.

Felder joined the band in 1974, and he had an immediate impact on the group, which was in the process of transitioning from the country-rock stylings of early hits including “Take It Easy,” “Peaceful, Easy Feeling” and “Best of My Love” into a more rock-edged sound. Felder was much more of a rock guitarist than their original guitarist, Bernie Leadon, and his contributions to the band were major, not only as an instrumentalist but also as a co-writer on songs including “Victim of Love,” “Those Shoes” and even “Hotel California.”

But problems developed between Felder and some of the other band members, especially singer-guitarist Glenn Frey. That came to a head at a concert in Long Beach, Calif., in 1980, when Frey and Felder clashed backstage before the show and subsequently taunted each other with threats of violence on stage in front of the fans during the show.

The band took a break for 14 years after that, and fans and even the musicians were surprised when the Eagles got back together for a tour in 1994 with the pre-breakup lineup of Frey, Don Henley, Felder, Joe Walsh and Timothy B. Schmit. That lineup toured steadily from 1994 until Felder’s dismissal in 2001, but there was still a great deal of turbulence behind the scenes in regard to Felder, who was unhappy with Henley and Frey’s dominance in the band and the fact that he was no longer an equal financial partner in the Eagles under the terms of the reunion.

It was Henley and Frey’s decision to fire Felder, and he responded by suing them, alleging wrongful termination, as well as breach of contract and fiduciary duty. That litigation settled out of court after several years of legal wrangling, and the terms were never disclosed.

Henley and Frey subsequently sued to try to stop the publication of Felder’s tell-all book about his time in the Eagles, which delayed its publication by two years. Finally published in 2009, Heaven and Hell: My Life in the Eagles offered a scathing portrayal of Henley and Frey as power and money-mad dictators who ran the Eagles with an iron fist and arranged underhanded ways of keeping as much of the resulting money for themselves as they could.

The book would provide the final nail in the coffin of Felder’s relationship with the other Eagles. Though past members Leadon and Randy Meisner were invited to participate in The History of the Eagles Tour in 2013, Felder was notably passed over, and as far as is publicly known, he has never spoken to anyone in the band since 2001. It’s a situation Felder says he wishes he could change.

“I’m a firm believer that people that have been such a substantial part of your life should not be slashed out. People that are good people, I like to keep in my life,” Felder told Ultimate Classic Rock in 2013. “I have reached out numerous times to the Eagles, directly and indirectly, with a warm handshake — not asking for anything, just conciliatory well-wishes — and the only response I’ve ever heard is from their lawyers. So I would say that’s a place they’ll have to arrive to on their own, if ever.”

Felder never got the chance to mend fences with Frey before the singer died in January of 2016. In a statement after Frey’s unexpected death at the age of 67, Felder said he was left “with a very heavy heart filled with sorrow,” pointing out that he and Frey had been like brothers at times, and like brothers, they had fought.

“It saddens me a great deal that we were never able to address the issues that came between us and talk them through,” Felder lamented. “Sadly, now we will never get the chance. The planet has lost a great man and a wonderful musician today. None will ever be able to take his place.”