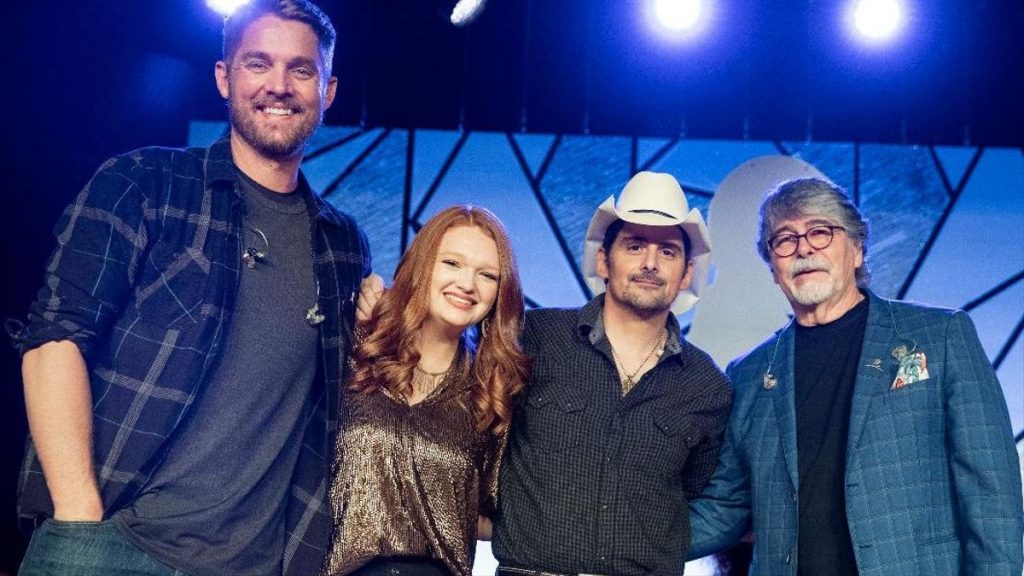 There was no better way to close out the St. Jude Country Cares celebration than with Randy Owen walking through the crowd singing his moving 1993 Alabama hit, “Angels Among Us.”

Because the room was literally packed with angels: the patients who survived because of St. Jude Children’s Research Hospital, and the people in the country music community who give generously to the hospital year after year.

Saturday night (Jan. 18) was the final night of the Country Cares Seminar in Memphis that brings together hundreds of supporters from all over the country. The ones with the biggest and most charitable hearts. Even the country artists who donate their time, talent and treasure show up to share stories and songs for the crowd gathered in the legendary Peabody hotel.

Brett Young and Brad Paisley joined Owen on stage to play along on his “Tennessee River,” “Lady Down on Love,” and “Mountain Music.” The three of them backed each other on hit after hit: Young’s “In Case You Didn’t Know,” “Catch” and “Mercy; and Paisley’s “Old Alabama,” “He Didn’t Have to Be,” and “Alive Right Now,” the song he penned with Kelley Lovelace for Addie Pratt.

Pratt is a cancer survivor from St. Jude. Just about four years ago, she was diagnosed with acute myeloid leukemia and was almost immediately sent to St. Jude. And now she’s not just surviving, she’s thriving. Pratt is a freshman at Ole Miss, she’s in the Delta Delta Delta sorority, and man, can she sing.

Paisley explained the story behind “Alive Right Now,” and how he’d just been examining what it’s like to be alive now. “There are a lot of great things about being on this planet right now. The greatest example of what humankind is capable of is this hospital. And when you’re gonna sing about being happy to be alive in these times, who better to do that than someone who has been through St. Jude and back again,” Paisley said as he introduced Pratt, who joined him on stage for their special collaboration.

Earlier in the show, Paisley was center stage sharing the wit and wisdom he’s mastered after 20 years in the music business. “I have the pleasure of introducing someone who has a ton of talent, and it’s just unfortunate when someone is this talented, with so much to say, and an incredible voice, and just doesn’t have the looks,” Paisley remarked about the effortlessly attractive Young. “But to echo what Brett said, this is the place that I believe gives country music its purpose and its heart, and it’s all because of Randy.

“First time I came to St. Jude — a long time ago now — (Owen) walked up to me and said, ’Son, you’re doing really well right now, and I’ll tell you that the No. 1 songs and the awards and all that won’t matter someday. And you’ll look back and wish you’d done more of this.

“This is what matters.”