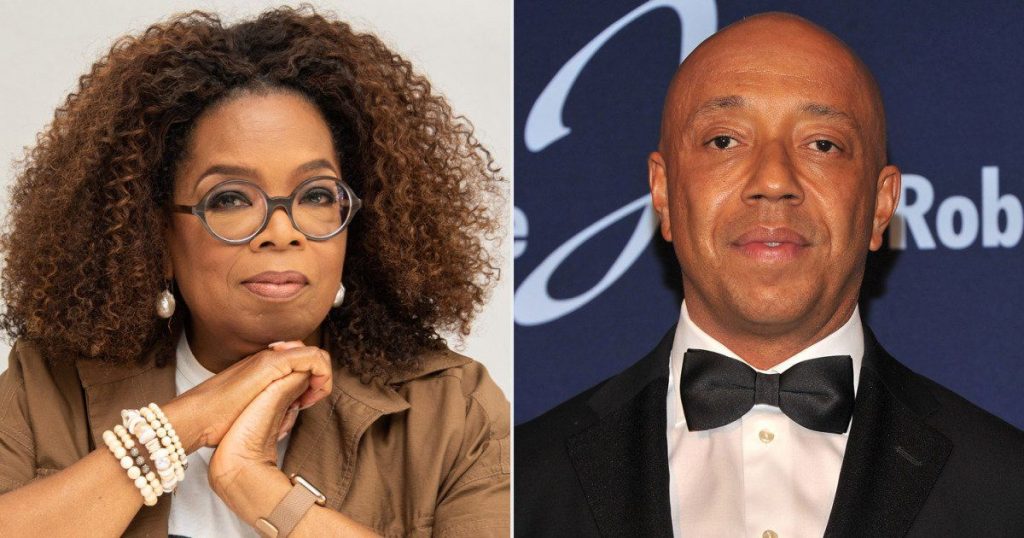 
Oprah Winfrey has dropped out as an executive producer on a documentary that delves into sexual misconduct allegations against Russell Simmons — but not because he pressured her, she says.

The media mogul, 65, spoke to The New York Times in an interview published Friday in which she alleged Simmons, 62, tried to convince her to back out of the film, named On The Record, as an executive producer. Winfrey ultimately did pull out of the film, citing creative differences between herself and the filmmakers.

“He did reach out multiple times and attempted to pressure me,” Winfrey said. “I told him directly in a phone call that I will not be pressured either into, or out of, backing this film.”

She added, “I am only going to do what I believe to be the right thing.”

In a statement obtained by PEOPLE, Simmons’ rep Thomasina Perkins-Washington said, “If defending himself against terrible accusations is considered intimidation then there would be no justice. Witnesses and family members were intimidated for expressing their views against these allegations.”

She added “written accounts and sworn testimony” depicted Simmons as “incapable of being violent toward women with whom he had ongoing highly visible romantic relationships from nearly 40 years back.”

In his own statement, Simmons said, “I have issued countless detailed denials of the false accusations against me, including pages of sworn witness testimony including family members, clergy, journalists and mutual friends who were present at every stage. These denials have been validated by my passing 9 prosecution-grade lie detector tests. I have also provided sworn statements and pointed out fatal flaws and inconsistencies in written accounts, some published in their own books, to reputable media organizations which have acted responsibly.”

“I have admitted to being a massively unconscious “playboy” which today is appropriately titled “womanizer”. Continuing to live my life honorably as an open book for decades, devoid of any kind of violence against anyone, as has been documented and examined in detail worldwide since the very early days of hip hop, which is my life’s testimony and work,” Simmons continued. “What I won’t do is engage in a shoot-out of attacks and counter-attacks. The social change from today’s activism is more important to the world my daughters will inherit than any dirt from false accusations from nearly 40 years ago.”

“My life as an entrepreneur, yogi and fighter for new and diverse voices, as well as the faith placed in my work by millions around the world, has been a force for good and will continue to be as long as I’m able to serve the communities I love and cherish.”

The Times reported Winfrey sought the counsel of her friend and filmmaker Ava DuVernay, who critiqued the documentary. DuVernay, 47, told the newspaper Winfrey was going to face fallout no matter what her decision turned out to be.

“She’s got Simmons on one side pressuring her, and then she’s got a film on the other side that she doesn’t agree with,” DuVernay said. “So if she walks away from the film she seems like she’s caving to Simmons, and if she stays with the film then she’s putting her name on something that she feels doesn’t quite hit the mark.”

Winfrey was an executive producer of the Kirby Dick and Amy Ziering directed documentary which was intended to air on Apple TV+ after its premiere at the Sundance Film Festival later this week. The film follows former music executive Drew Dixon who previously accused Simmons of “aggressive sexual harassment” in a 2017 interview with the Times.

Simmons has vehemently denied all allegations against him.

Winfrey announced her decision to pull back in a statement obtained by PEOPLE earlier this month.

“I have decided that I will no longer be executive producer on The Untitled Kirby Dick and Amy Ziering Documentary and it will not air on Apple TV+,” Winfrey said.

“First and foremost, I want it to be known that I unequivocally believe and support the women Their stories deserve to be told and heard. In my opinion, there is more work to be done on the film to illuminate the full scope of what the victims endured and it has become clear that the filmmakers and I are not aligned in that creative vision,” Winfrey continued. “Kirby Dick and Amy Ziering are talented filmmakers. I have great respect for their mission but given the filmmakers’ desire to premiere the film at the Sundance Film Festival before I believe it is complete, I feel it’s best to step aside.”

She added, “I will be working with Time’s Up to support the victims and those impacted by the abuse and sexual harassment.”

In a statement obtained by PEOPLE, Dick and Ziering said, “Revealing hard truths is never easy, and the women in our documentary are all showing extraordinary strength and courage by raising their voices to address sexual abuse in the music industry. While we are disappointed that Oprah Winfrey is no longer an Executive Producer on the project, we are gratified that Winfrey has unequivocally said she believes and supports the survivors in the film.”

They continued, “The #MeToo experiences of Black women deserve to be heard, especially against powerful men, so we will continue with our plans to bring the film to The Sundance Film Festival. This film more than two years in the making, will be our eighth to premiere at Sundance.”

“The film is a beacon of hope for voices that have long been suppressed, and an inspiration for anyone wanting to regain their personal power,” they added.

Simmons previously reached out to Winfrey on Instagram in December, asking her to reconsider her involvement in the documentary.

He also denied allegations that he had “forced” himself on women in his post, writing, “… In closing, I am guilty of exploiting, supporting, and making the soundtrack for a grossly unequal society, but i have never been violent or forced myself on anyone. Still I am here to help support a necessary shift in power and consciousness. Let us get to work on uplifting humanity and put this moment and old narrative behind us.”

On The Record premieres at the Sundance Film Festival on Saturday.