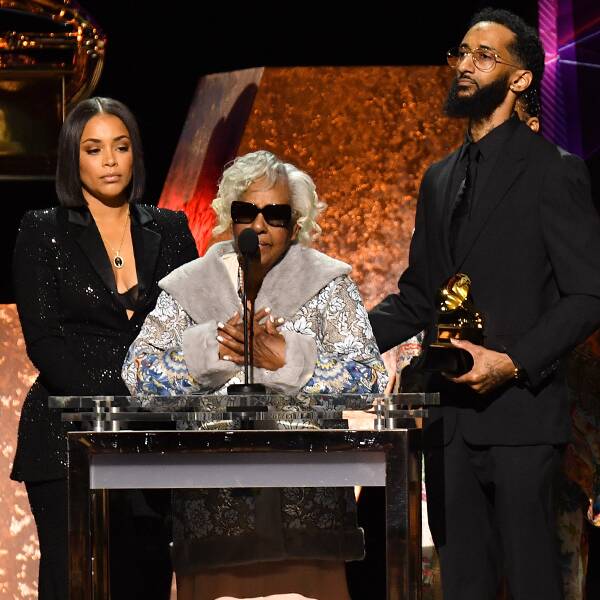 It’s been nearly a year since the death of South L.A. native and rapper Nipsey Hussle, but his memory lives on.

Ahead of the the 2020 Grammys, the rapper, born Ermias Joseph Asghedom, posthumously won the award for Best Rap Performance. His longtime love Lauren London, who has kept a relatively low profile since his March 2019 death, was on hand to accept the coveted trophy. “I speak on behalf of our family and in honor of Nip, who was a phenomenal vessel,” she said. “Nip did it not just for the awards, but for the people. God allowed him to use this music to speak his truth, give his wisdom and something we will forever be able to live with.”

London was also joined by his grandmother, Margaret Boutte. “I wanted to thank all of you for showing all the love that I have felt for him all of his life and always will live in my heart,” Boutte added. “Thank you, thank you.”

Later in the evening, the late superstar will be honored with a commemorative performance that will feature John Legend, DJ Khaled, Meek Mill, Roddy Ricch, YG and Kirk Franklin.

“An activist, entrepreneur, and rapper, Nipsey Hussle had a lasting impact on not just his community, but also the culture at large,” said Grammy Awards executive producer Ken Ehrlich in a statement regarding the performance.

“There is no denying the influence he had and his legacy will be left for generations to come,” the statement continued. “We are honored to bring together this amazing group of artists to celebrate Nipsey’s life and pay tribute to his many contributions to music. It’s sure to be a memorable performance.”

The “Grinding All My Life” artist was posthumously nominated for three Grammys this year, including Best Rap/Sung Performance, Best Rap Performance and Best Rap Song.

In November 2019, when Hussle’s Grammy nominations were announced, London took to Instagram, writing, “Grammy nominated Nip. King Ermias. Humbled I was around such Greatness. Love You Forever.”

Since Hussle’s death, the Los Angeles community and beyond have continued to mourn and honor the late rapper’s legacy.

Most recently, London honored Hussle in her Puma’s “Forever Stronger” campaign. The clothing brand launched the campaign with showcasing London as she wanders through the streets of L.A.

“The pain is a light. Pain is insight,” she says in a voice-over, reciting a poem written by Hussle’s younger sister. “The body hurts but the spirit grows.”