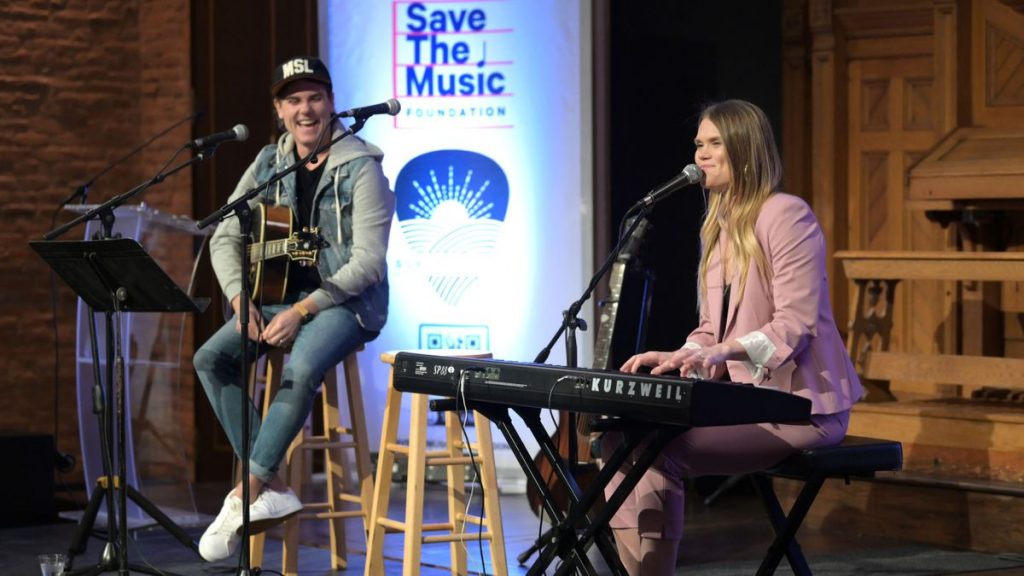 And that’s part of the reason why Nashville songwriters Copperman and Galyon were being celebrated as SongFarm’s Champions of the Year on Thursday night (Feb. 13) at Nashville’s Clementine — an old West Nashville United Methodist Church that’s been converted into a stunning event space. But the night was also a celebration of the work being done with SongFarm and the Save The Music Foundation.

“I have to admit I’m kind of crawling out of my skin right now,” Galyon admitted when she took the stage. “Because the award for me is the gift I get to give to my hometown. Ross and I actually just got home from a creative retreat — so we’re very much in our feels — but we heard a quote this week that I think speaks to a lot of us: artists are people driven by the tension between the desire to communicate and the desire to hide. Is that not every teenager you know? That truly wraps up the heart of what we’re doing here. In high school, I was one of the lucky ones. I had champions behind me that pushed me. But even with all of that, I still had a yearning to do something that maybe didn’t fit.

“What I was wanting was someone to hand me a blank page,” she said.

Copperman echoed those same sentiments, adding that the night was not about him but about the importance of the initiatives of SongFarm and Save the Music. “This whole thing is not about me at all. It’s about Save the Music. I’ve been a huge fan of Save the Music my whole life. I remember as a kid being enamored with it,” he said. Steve Franco, Copperman’s high school drama director, was at the event to corroborate that, and to share his thoughts on how impactful it’s been to have a SongFarm Studio at Glenvar.

But it wasn’t all talk. There was just enough music to remind everyone why they were there.

Copperman performed a couple of the recent songs he’d written, Kenny Chesney’s “Setting the World on Fire” and Blake Shelton and Gwen Stefani’s “Nobody But You.” Galyon performed Kelsea Ballerini’s “Homecoming Queen?” and “Tequila,” the song she co-wrote for Dan + Shay. And country star Michael Ray was there, too, to share his new song, “Her World or Mine.”

Ray talked about the importance of the cause and the importance of music in general. “My parents got divorced when I was 8 years old, and my grandpa knew about the healing power of music,” he said, “and what that would do for an 8-year-old boy who was confused as hell. I dove into country music.”

Since 1997, Save the Music has helped over 2,000 schools start music programs impacting millions of children. And yet, more than five million American public school students don’t have access to music education.