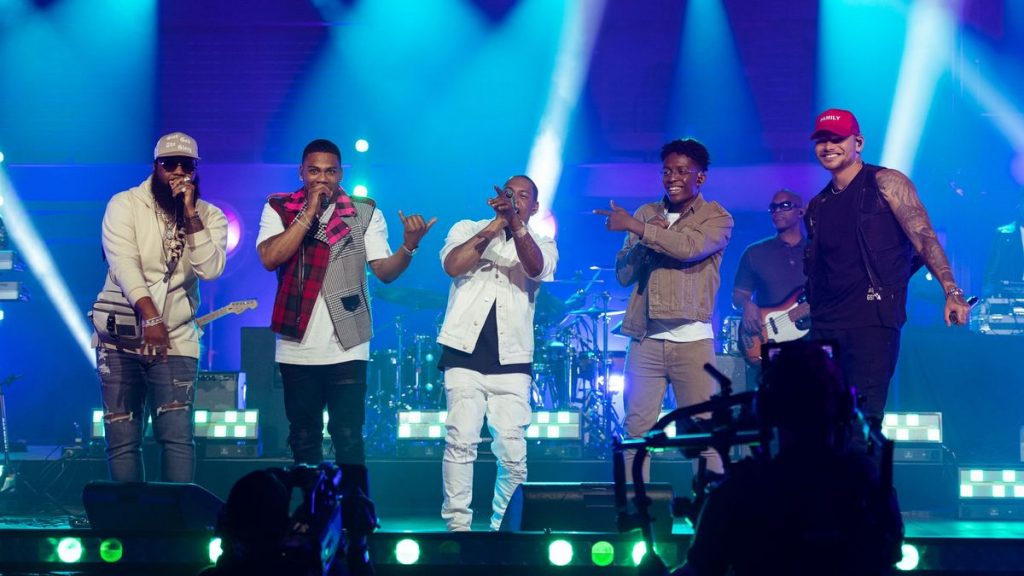 Sneak Peek: @Nelly_Mo, @kanebrown, @blancobrown and @breland collabing on “Country Grammar.” That is all. 🤯 🤩

In a way, the September 1-premiering and latest edition of CMT’s vaunted Crossroads program chronicles the emcee’s rise from a hook-loving tough-talking gangster to the pop-country adapting artist on his August 27-released Heartland EP. His country-hybrid success is not just highlighted by his 17-year old chart-topping country-rap hybrid single “Over And Over” with Tim McGraw. Considering that his debut single is entitled “Country Grammar,” maybe it’s worth looking back to his breakout beginnings to put together how his musical arc may have always had a direction where success that broadened his career into country music was always a possibility.

After the turn of the 21st century, Labor Day Weekend saw Nelly impressively achieve Billboard Hot 100 top-10 charting success for his debut mainstream single “Country Grammar.” In the sing-a-long rap track from the then St. Louis-based rap upstart, he pressed for being “let into” the levels of commercial success and crossover superstardom of iconic American billionaires like Microsoft founder Bill Gates. Audacious braggadocio has always been a hallmark of hip-hop stars. However, rap had never seen the likes of a “St. Lunatic” before.

The year 2000 saw the beginnings of an era where rap emerged into an even greater national phenomenon. The midwest had already seen cities like Cleveland, Chicago, and Detroit claiming local-to-national rap success. Curiously enough, for country fans, a listen to the song and view of the video of Chicago-based group Crucial Conflict’s 1994 track “Hay” shows what a preview of the style that inspired everything from “Country Grammar” to “Old Town Road” and so much more.

However, the deeper distribution of mainstream rap music into a greater number of cities allowed for local scenes in places like Atlanta, New Orleans, Houston, Memphis, and St. Louis — intriguingly all southern cities with lineages that also expanded into country music — to have equal impact in hip-hop, too. Thus, for as much as a rap song entitled “Country Grammar” seems like an outlier, it’s also, given the nature of the era, perfectly normal, too.

Country music’s rural roots from the Appalachian Trail to the Mississippi River’s southernmost basin includes a swath of antebellum, slave, and sharecropper era Black-influenced white American culture that makes Tom Breihan’s opening to his 20th-anniversary review of “Country Grammar” take on heightened relevance when contemplating both “Country Grammar’s” appeal as well as why Nelly has likely always had a solid root to claim open entry into country music:

“Nobody can take credit for ’Down Down Baby’ [the song that birthed “Country Grammar”s hook]. ’Down Down Baby’ is a part of American folkloric tradition, a clapping-game chant that goes back, at the very least, to the mid-20th century…It’s a song that’s passed from one kid to the next, usually in Black communities, and it’s had a bunch of different lyrical variations. But the tune has been consistent — a joyous syncopated burst of near-nonsense. That means it works as pop music.”

Even deeper, Breihan’s conclusion points at how St. Louis’ contribution to the explosion of regional rap into pop’s mainstream created a seamless space for country’s traditions and rap’s innovations to collide at Nelly’s surge into top-ten Billboard chart success:

“Nelly showed up at exactly the right moment when rappers from provincial Southern and Midwestern towns were just starting to build regional empires. He took things that had already been out in the world — New Orleans bounce, Bone Thugs melody, old-school soul-barker intonations — and he made them feel new. He used an old clapping-game cadence, and he presented it to the world like a brand-new thing. The world received it enthusiastically.”

One view of Nelly’s performance of “Country Grammar” from Nelly and Friends highlights the long-tail story of how country and hip-hop’s unlikely collision created a space wherein music, culture, and society converged to create a moment wherein Nelly maybe wasn’t entirely “let in” to Bill Gates’ level of socio-economic wealth. However, his “country grammar” could best represent the most profound way that hip-hop and country music communicate with each other and positively impact the world at large.

Nelly and Friends will be i airing at the following times: