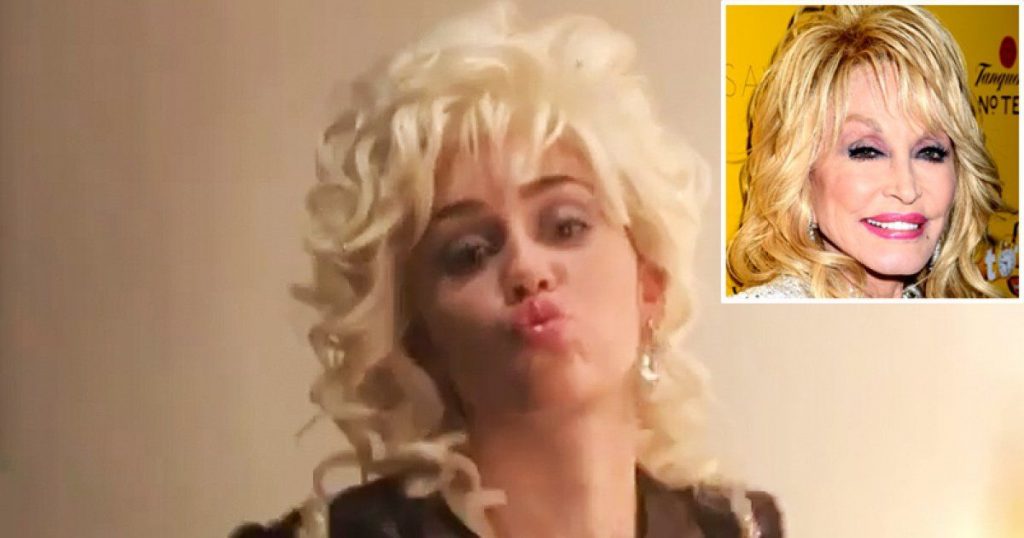 On Sunday, the “Mother’s Daughter” singer, 27, gave a birthday shout-out to Dolly Parton as she turned 74, sharing two hilarious behind-the-scenes looks at herself getting into character to impersonate the legendary songstress.

“Happy Birthday Aunt Dolly!!!!! ( . ) ( . ) @dollyparton,” Cyrus captioned the post, which showed the star applying lip gloss while wearing her curly, blonde wig and calf-length dress (including some extra padding in her bra).

The throwback clips came from a 2017 appearance Cyrus made on The Tonight Show, during which she channeled her godmother to reenact Parton’s famous 1983 Grammy performance of “Islands in the Stream,” with Jimmy Fallon stepping in for Kenny Rogers.

Cyrus can count Hilary Swank among her fans of the Parton cosplay, as the Oscar winner commented on the post, “Your voice is absolutely stunning ?.”

In November, Parton opened up to PEOPLE about her relationship with her goddaughter, including how the country legend hopes to set an example for Cyrus.

“I’ve told her some things that I think are valuable and that she uses, but I’d rather live an example,” Parton said. “[I’d rather] be an example rather than just try to tell somebody to do this, do that because I don’t think that’s right. Everybody’s different.”

She continued: “You’ve got your own journey. And some people are going to help you along the way and they can kick a few rocks out of the road for you, but you got to walk it.”

Never miss a story — sign up for PEOPLE’s free daily newsletter to stay up-to-date on the best of what PEOPLE has to offer, from juicy celebrity news to compelling human interest stories

RELATED: Presenting Some of the Funniest Celebrity Impressions Ever

During a press conference held at her Dollywood DreamMore Resort in Pigeon Forge, Tennessee, to promote her Netflix series, Dolly Parton’s Heartstrings, in October, Parton told reporters that she’s proud of Cyrus for “doing her thing.”

“Miley is so talented,” she said. “Miley has such gifts, and I think she’s gonna’ be great. Now other people say, ‘You need to talk to Miley.’ I say: ‘No, I don’t. Miley will be Miley, I’ll be me and everybody needs to do their own thing.’”

Explaining what it’s like to have Parton as a godmother, Cyrus told Cosmopolitan in 2017 that not only is the “9 to 5” singer a loving mentor — “access to her closet” also comes with lots of perks.

“Seriously, watching the way she treats people with love and respect,” she added of having Parton to look up to. “Always a reminder to me and my family of what is important. Never let success change your heart.”