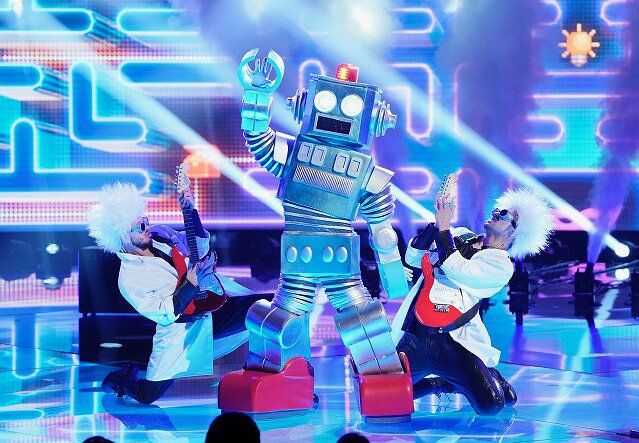 Yes, all the world was indeed watching — or gawking, wondering if their Buffalo chicken dip had been garnished with psilocybin slices — as Sunday’s premiere, which made Jennifer Lopez’s and Shakira’s halftime spectacle look like an acoustic open mic night at the local coffeehouse, trotted out a troupe of Cats-worthy fabulous furries, including a rhinestone-gloved boxing Kangaroo, a punk-rock teenage mutant ninja Turtle, and a prosthetically enhanced, bootylicious Llama.

But the big moment was what gobsmacked judge Ken Jeong enthusiastically declared the “best reveal ever!”

This bonkers TV guessing game has already achieved global domination, and the new British edition of the show has recruited actually credible music stars — like Jake “The Unicorn” Shears of Scissor Sisters (covering Kate Bush and Blur!), Justin “The Chameleon” Hawkins of the Darkness (belting Radiohead!), Kelis as the Daisy, and Skin from ‘90s Britpop band Skunk Anansie (dressed not as a skunk, but as the Duck). So, it was time for America’s Masked Singer to bring its A-game.

And that it did, with Season 3’s first celebrity castoff being one of the most successful recording artists of all time.

To loosely paraphrase the Robot’s intro music, Styx’s “Mr. Roboto,” yes, I was wondering who he was. So were the judges — who, based on a reference to “stunts,” guessed that this man-machine might be Floyd Mayweather, Shawn White, Flavor Flav, or Jackass’s Johnny Knoxville or Steve-O. I thought, based on the raspy, monotonic vocals on the Robot’s cover of Lenny Kravitz’s “Are You Gonna Go My Way,” that it might be either Drake or Lil Wayne. But it’s the latter who probably-not-coincidentally just dropped his 13th studio album, Funeral, so of course it was the one and only Weezy.

“He just made this show so much cooler!” exclaimed Cannon. “This is a moment in television history!”

“This is the most shocked I’ve ever been on this show!” admitted judge Robin Thicke — who was especially embarrassed, since he has actually collaborated on five tracks with Wayne.

“My kids watch the show, and I knew they were going to like the Robot costume,” Wayne answered sweetly, when Cannon asked why he would ever agree to perform on a show like this. Aw. He really is a big softie underneath that hard exterior.

The Robot will be missed. I’m just thinking of all the Kraftwerk and Daft Punk songs he could have performed. But five more mystery celebrities survived to sing another day, and Cannon teased that they’ve “appeared in nine Super Bowls” between them. And according to Fox, this super-sized season’s 18 cast members have a combined total of eleven Super Bowl appearances, plus 69 Grammy nominations, 88 gold records, three Hollywood Walk of Fame stars, and one entry in the Guinness Book of World Records, under their glittering belts.

So, could these cosplayers be footballers, sportscasters, or even halftime show headliners? Heck, one of them might even be Left Shark, since The Masked Singer’s mad-genius wardrobe designer, Marina Toybina, actually won an Emmy for designing the viral dancing sharks that accompanied — and upstaged — Katy Perry at 2015’s Super Bowl halftime show. We at least know that none of these beautiful creatures are Jamie Foxx, who was widely assumed, even by his own relatives, to be last season’s winner (the demasked Fox turned out to be Wayne Brady) — since Foxx served as guest judge on Sunday’s premiere.

I had a hunch a Robot was Lil Wayne, but overall, the clues were tougher than ever this time around, so I doubt I’ll to score any more touchdowns in week one. But I’ll make my best guestimates. Game on!

Doing something from Duran Duran’s Seven and the Ragged Tiger album would’ve been a nice touch, but at least this gladiator-uniformed feline warrior entered the area to the triumphant strains of Survivor’s even more obvious “Eye of the Tiger.” But this wasn’t a victorious performance, nor was it flawless, despite the White Tiger’s assertion, “My whole life I’ve sought perfection” or Vanilla Ice’s boastful line, “Anything less than the best is a felony.” This dude may be a pro… but he’s not a pro singer.

The clues: He’s super-tall, an “ultimate champion of clam-shucking” (implying a UFC background and/or New England ties), and has had a “giant” career. There was also a brief, patriotic Abraham Lincoln reference. Smitten judge Nicole Scherzinger was also crushing hard, so I guess she’d already gotten over Victor “The Thingamajig” Oladipo, her showmance partner from last season.

My guess: Um… someone from the New England Giants or New England Patriots? Sorry, my football knowledge pretty much ends with Left Shark. But the 6-foot-6 Gronk seems highly likely. How much you wanna bet the Tiger will sing some Bon Jovi next round?

The Turtle, “Kiss From a Rose”

Paying homage to last season’s Seal, a.k.a. the Leopard, this crooner revealed a softness and sentimentality behind his tough outer shell. He also showcased a pristine falsetto and natural swag that seemed totally boy-band-trained. Jeong declared that the Turtle is already a Season 3 frontrunner. The Leopard would be proud.

The clues: “At the starting line of my career, I was surrounded by other hungry newcomers,” said the Turtle, explaining he’s taken a more tortoise-like, “step by step” approach to his career. Visual clues included a surfboard and some grilled (Wahl?)burgers.

My guesses: Although it’d make for awesome television and be cause for shell-e-bration if the Turtle turned out to be judge Jenny McCarthy’s husband, Donnie, Joey is a better guess. Joey did once cover the Wahlburgers theme song, and he appeared on a web series called Burger Run. But I’m going to stick my neck out (heh) and say that the Turtle sounds more like another Kid on the Block: Jordan Knight, who once attended surf school on the only reality show more bananas than The Masked Singer, VH1’s The Surreal Life. However, my NKOTB-obsessed friend says the Turtle doesn’t sound like any of the New Kids, so I secretly hope that this is one of the two voice actors from the Teenage Mutant Ninja Turtles flick, Corey Feldman or Robbie “Cousin Oliver” Rist.

The Llama, “She Bangs”

Well, the Llama is a better vocalist than Ricky Martin enthusiast William Hung — but not by much. Still, he rocked that strap-on booty with panache (if he doesn’t do “Llama School” by MTV’s Sifl & Olly as his next musical number, then “Baby Got Back” is another smart choice) and he was wildly entertaining. “I wear things like this in real life,” he said of his padded hindquarters.

The clues: He’s some sort of “Joker,” possibly a shock-rock DJ. And another playing card, the Ace of Spades, hinted that the Llama might be a certain SNL alumnus enjoying his 16th Hollywood minute. He might also be a Buddhist (Dali Llama, get it?), even though this bizarre performance was anything but Zen.

Judges’ guesses: Former guest judge and Jeong’s Community co-star Joel McHale (“This is exactly what Joel looks like before hair and makeup,” quipped Ken), David Spade, or Howard Stern. (The latter is doubtful, even though when the Llama said, “Let’s get serious,” he may have meant “Sirius.”)

My guess: David Spade’s a strong possibility. And I really wish that it was Saturday Night Live ’s Norm MacDonald, since, considering that he made a career out of trolling Michael Jackson, it would be just like him to dress up like one of MJ’s famous Neverland pets. But I think it might be semi-decent singer and poker player Kevin Hart, who has his own SiriusXM comedy channel. And those wheeled back legs just might serve some sort of practical mobility purpose for Hart, as he recovers from his recent back injury.

Miss Monster, “Something to Talk About”

Early commercials implied that Season 1 winner T-Pain’s better half might be some sort of fluffy-headed socialite like Paris Hilton or Kim Kardashian. But now, anyone who’s ever heard those ladies’ respective singles “Stars Are Blind” and “Jam” knows that’s not the case, because this furry fiend can sing! Her vocals may have been weathered, suggesting she’s an elder-stateswoman contestant, but she sounded like a soulful legend — possibly this season’s answer to Season 1’s Bee (Gladys Knight) or Season 2’s Flower (Patti LaBelle).

The clues: She loves hairspray, T-Pain, and the color pink; she feels misunderstood; and she wonders, “Will you still love me without knowing my name?”

My guesses: Dionne or Mary would make sense, but the “hairspray” clue has me wondering if this is a Hairspray cast member. Could it possibly be Pia Zadora or Blondie’s Deborah Harry? But pay close attention to those other clues: Could this even be Missundaztood and “Love Me Anyway”/“Hurts 2B Human” singer P!nk — expertly disguising her voice? That would really get the party started.

The Kangaroo, “Dancing on my Own”

This was a solid vocal and a fantastic song pick. A rhinestone-studded marsupial singing a Robyn tearjerker seems very fitting for this already-insane 2020, really.

The clues: The statuesque Kangaroo has ties to Australia; she’s a “survivor” who yearns to “bounce back”; and she’s been “in the spotlight for all the wrong reasons,” explaining: “This year I’ve had no other option to be vulnerable, but with this costume, I feel I can get my superpowers back.” She also has some sort of Grammys track record.

My guess: It actually could be Aussie, four-time Grammy nominee, and 5-foot-10 “Bounce” star Iggy — who started as a singer before she became a hugely successful rapper and then suffered a massive career decline. She certainly wore her (wait for it) fancy outfit like a dueling diva. (I guess it would have been too obvious for her to dress like the Black Widow.) The Kangaroo sounds like Iggy. And I truly hope it’s her, because that would be the best comeback story ever and revenge against that two-timing jerk T.I.!

Come back this wacky Wednesday, when the series settles back into its regular timeslot and six new mystery contestants compete for Season 3’s Golden Mask. I’m telling you right now, if the Taco performs and doesn’t do “Puttin’ on the Ritz,” the musical director of this show needs to be fired. See you then!