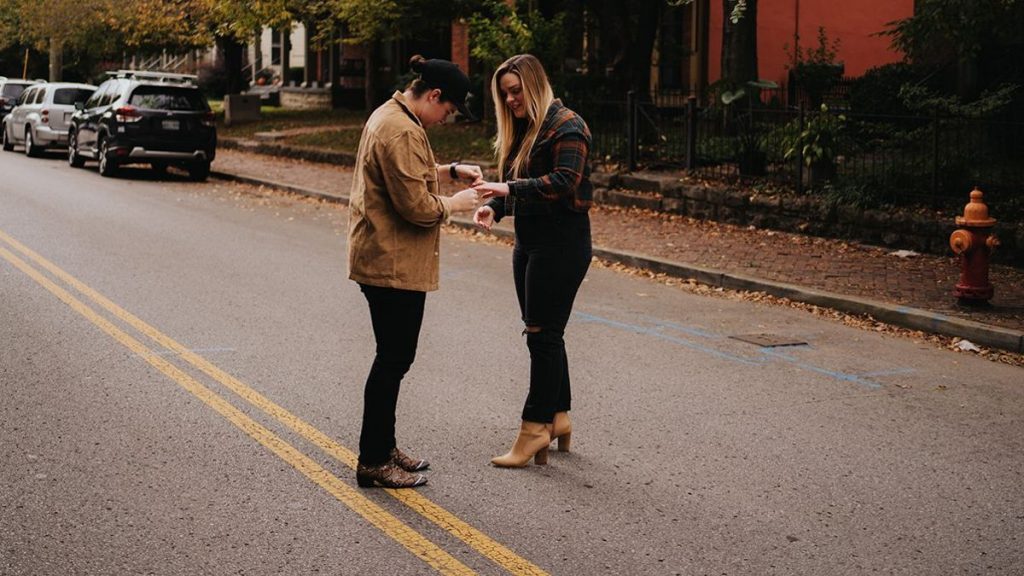 CMT’s “Next Women of Country” member Lily Rose is officially a year out from tying the knot with Fiancée Daira Eamon.

Ahead of Rose’s performance at Joe’s Live Rosemont in Chicago (March 25), CMT sat down with the Nashville newcomer to talk wedding planning and to celebrate her recent GLAAD Award nomination for “Outstanding Breakthrough Music Artist.”

“We are actually getting married a year from today,” Rose told CMT full of excitement. “We’re on the official countdown. You really don’t count down until it’s within a year,” she clarified.

Following her viral hit “Villain,” Rose scored a joint record deal with Big Loud Records, Back Blocks Music, and Republic Records in early 2021. In between becoming a signed recording artist and experiencing several firsts within the music industry, the Georgia native found the time to drop down on one knee to propose to long-time girlfriend, Daira Eamon.

Rose told CMT that her schedule has never been so tight, as she is tirelessly trying to juggle her budding music career and wedding planning all at once.

“Right now, I’m on the road every Sunday,” she said about serving as support on Chris Lane’s Fill Them Boots Tour. “Then Monday, Tuesday, Wednesday is writing new music in the studio. We’re cutting songs right now and doing wedding meetings. So, we’re in the thick of it,” she laughed.

Rose confirmed that she has all the moving parts under control, and is willing to take more on. The singer-songwriter described herself as a “big planner.”

“We decided we really want to have a hand in everything …I know that’s a cliché answer,” she pointed out. “But, I’m a big planner. I am a spreadsheet feene. The one thing I am taking over is DJ and music. Daira is doing the flowers, which is pretty funny because I’m Lily Rose,” she added.

While most brides dread creating table arrangements, Rose told CMT that she is looking forward to getting strategic and working on the complex seating chart.

“I am so excited, you have no idea,” she stressed. “We have a wedding planning meeting this coming week to get to know the plot of everything, and that is when I will get into it.”

Rose revealed that the big day will be held in Nashville, because music city holds sentimental value and is also considered “home.”

“We’re doing it in Nashville. I’m from Atlanta, and she’s from Las Vegas,” she explained. “So, we figured let’s do it in our home. If you live in Nashville, you know everyone’s going to come.”

The songstress hopes her guest traveling from out-of-state makes a fun-filled weekend out of their wedding. Rose mentioned that their main priority is to hold one “big ole party.”

Although the “Stronger Than I Am” singer won’t be performing at her wedding, she assured CMT that they both would need a relaxing honeymoon after the affair.

“One of our very dear friends in Nashville actually works for a private travel agency. So, we’re excited to work with her, give her business,” she said. “Definitely tropical. We were hopeful with this very cool job that I have, we’ll be able to do Europe with work stuff. But, we decided just to go and relax because we know it’s going to be a long weekend of alcohol.”

Rose popped the question in late October in Nashville’s Germantown neighborhood on a walk to their favorite restaurant, Mother’s Ruin. The two have been inseparable since they made their relationship official in 2018. Rose shared that Eamon has been the “best tour fiancée,” as she never fails to miss a performance and does not mind living life out on the road.

The TikTok sensation turned country breakout star has never shied away from speaking out about her relationship and being a part of the LGBTQ+ community. While rose has proved to be a country mainstay with her contagious sound, she has also quickly become a trailblazer within the genre for fearlessly being herself and a passionate pride advocate.

The way Rose represents herself and the LGBTQ+ community has not gone unnoticed. The role model recently scored a nomination for “Outstanding Breakthrough Music Artist” at the 2022 GLAAD Media Award.

“Media can create positive change and this year’s nominees represent powerful projects, stories, and creators that positively shifted culture and enlightened audiences with new and impactful LGBTQ stories,” said GLAAD President & CEO Sarah Kate Ellis in a previously statement. “There are more nominees this year than ever before, highlighting a growing landscape of LGBTQ visibility, and serving as a reminder to the critical role that film, television, music, journalism, and other forms of media can play in growing LGBTQ acceptance in the face of ongoing attacks against our community.”

The 33rd Annual GLAAD Award will be held on Saturday, April 2, at the Beverly Hilton hotel in Los Angeles and New York on May 6. Rose declared that she’s proud to represent the country music genre.

“It’s always so humbling because I love this genre. It’s the reason why I’m in this genre. But, anything that crosses all genres, let alone entertainment in general… It’s humbling,” said Rose with gratitude. “But it’s also intimidating too. Walking that carpet, knowing that somebody like Sam Smith, Demi Lovato, and Brandi Carlile has not only been on that carpet, but has been nominated before or might be there – is the next level of inspiring. I am just proud to be someone in country music that could be nominated for this award.”

The female powerhouse continued to voice her primary goal and credits notable names who have knocked down barriers before her.

“Ellen, Shane McAnally, and people like that across entertainment have really walked, so people like me can run,” expressed Rose. “My goal is that kids can just sprint and have all the exact opportunities and just get treated with kindness,” she concluded.