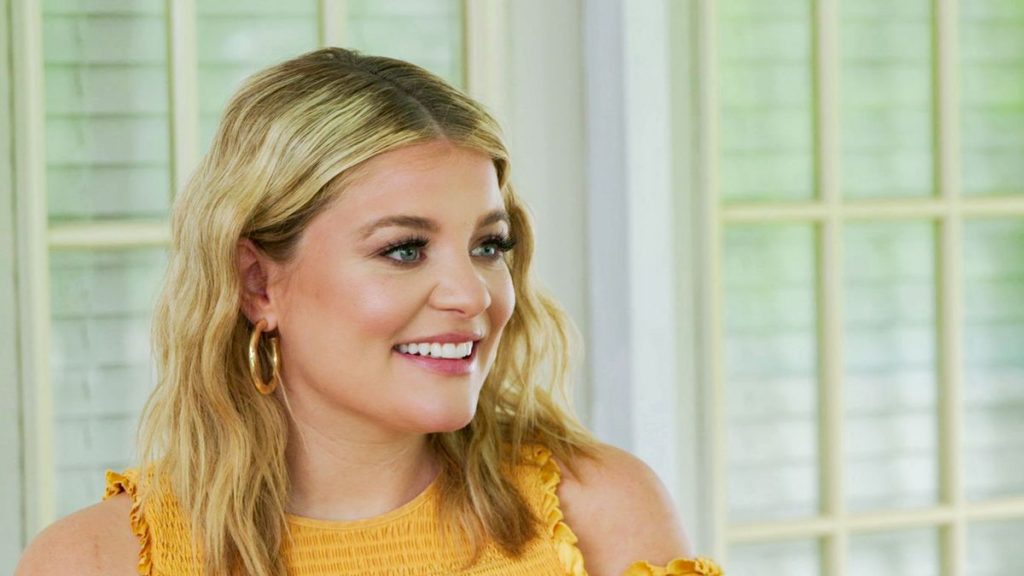 In late 2010 Lauren Alaina–then a teenager brimming with dreams of a career in music–auditioned for American Idol. She made it through round after round, impressing the judges–and just as importantly, Idol viewers–with her soaring vocals and charismatic personality. She ultimately placed second in the competition, and went on to earn a label deal. Her voice, infectious charm and heartfelt songwriting would earn Alaina country radio hits including “Road Less Traveled” and “What Ifs,” alongside Kane Brown. Her talent and drive have also been evident on her EPs including 2015’s Lauren Alaina, her two 2020 releases Getting Good and Getting Over Him, and her full-length projects including Wildflower (2011), Road Less Traveled (2017) and her upcoming third full-length project, Sitting Pretty On Top of the World, slated for Sept. 3.

But during her time competing on Idol, Alaina was surrounded by the support of not only her family, but notably, one very special teacher, Susan Bradley.

“Susan Bradley is an angel on earth, literally,” Alaina tells CMT of her former cheerleading coach and tutor, whom Alaina says kept her grounded during her time competing on Idol.

“I met Susan my freshman year of high school, which for a young girl, that’s a very critical time,” Alaina tells CMT. “I wasn’t the best cheerleader. I honestly had the least experience, I think, on the whole team. She just really pushed me to be the best version of myself. Then when I went on American Idol, she actually came out there and stayed with me at one point, so my mom could come home for my brother’s graduation. Then, after American Idol, I signed my record deal at 16 years old and I was a traveling artist at 16. When I would come home, she would tutor me on top of her normal schedule, to help me graduate high school. She’s one of the reasons I have a high school diploma.”

On Friday, Aug. 6, music fans will get an inside look at one way Alaina has helped show gratitude to Bradley for her ongoing love and support, when Alaina and Bradley are featured on Secret Celebrity Renovation, as Alaina helps renovate Bradley’s Georgia home. The episode airs Friday, Aug. 6 at 8 p.m. ET on the CBS Television Network, and will be available for streaming live and on demand via the CBS app and Paramount+.

“Most of the stuff I do on TV, it’s about me, but I love this so much because it’s about her,” Alaina tells CMT. “I’m so happy to be able to use my platform to give back to someone who heavily influenced the person I am today. So to give her a thank you for that was so cool, and that’s one of the reasons I think Secret Celebrity Renovation is such a cool show.”

Alaina chatted with CMT about surprising Bradley, and about the singer’s work during the three-week renovation and filming process.

CMT: How did this Secret Celebrity Renovation opportunity come about, and how did you decide on Susan as the person you wanted to honor?
Alaina: You know what is so crazy about picking her? They approached my management team first and when they brought the opportunity to Trisha, my manager–before Trisha ever even talked to me about if I wanted to do the show or anything–she told them, ‘I’m sure Lauren’s going to want to do this show, and I feel pretty confident she’ll pick her cheerleading coach.’ Then she called me and of course, I said I wanted to do it and I said, ‘We have to pick Susan.’ And Trisha said, ‘Well, I’m glad you said that because I already told them that would probably be who you would pick.’”

CMT: During the episode, you worked with the show’s Nischelle Turner, Sabrina Soto and Jason Cameron to completely renovate the inside of Susan’s home, from taking out bathrooms and revamping living rooms, and you are very hands-on with it. Have you been involved with any home renovations of your own before?
Alaina: I flipped my first house, so I lived in construction for about two years. But also my uncle Junior builds homes and lays concrete and does masonry. So I’m not afraid of it. I’ve grown up in an environment of people demolishing homes and renovating…I think they were all surprised when I got a hold of that sledgehammer. I literally pulled the cabinets out of that bathroom.

CMT: How did you help with some of the design choices?
Alaina: It was pretty collaborative. They had several ideas for how they wanted to renovate it. But, like, Sabrina would ask me, ‘Does this look like something she would like?’ or ‘What colors does she like?’ It was collaborative, but they were driving it, definitely.

CMT: What do you recall about that moment when Susan and her husband were finally able to see their renovated home?
Alaina: I was overwhelmed with anxiety until she saw it, because it is a very scary thing to renovate someone else’s home. And I just wanted her to love it so much, but I had a pretty good feeling she was going to. I mean, it is incredible. And then when she saw it and just to see her overwhelming gratitude, it was a good day. That reveal day was a good day. I would say, if you’re going to watch the show, you need some have some tissues.

CMT: Have you seen the finished episode?
Alaina: I have not seen it, no, but I lived it, so I know it’s a real tear jerker.

CMT: What was one of your favorite moments from working on the renovation?
Alaina: I was pretty happy to see that blue bathtub go bye-bye. But I think the best part for me was her outdoor space, her back porch, because I can just see her out there entertaining her grandchildren and her children and her family. She already had a screened-in back porch, but it was just very basic. So we vaulted the ceiling up to the roof line. So it’s huge and open now. We put a swinging bed in there, we got all new furniture, we painted it, we put a fireplace out there. I mean, we did all kinds of stuff.

CMT: In addition to this episode, you also just announced your new album, Sitting Pretty On Top of the World, will release Sept. 3. What are you most excited about with this new album?
Alaina: I think for me, this album represents really well who I am now. Road Less Traveled was a coming-of-age album, becoming a woman, growing into this person. This album is about being her and overcoming all the obstacles along the way. I think it’s the best selection of music I’ve ever made. I can’t wait for people to hear my story, for me to share the last few years with them.

But I never really wrote a song about my first love and how I was the one to ultimately walk away. Even though we both knew it was the right thing, I didn’t really know how to write a song for him. This song is that for me. I told Hillary the idea about the line, ‘It wasn’t you I didn’t love, it was me.’ It’s my way of saying, “I wasn’t an adult. I didn’t love myself. I didn’t know myself. And it wasn’t you, it was me.” It is my favorite song I’ve ever written, hands down, no comparison.