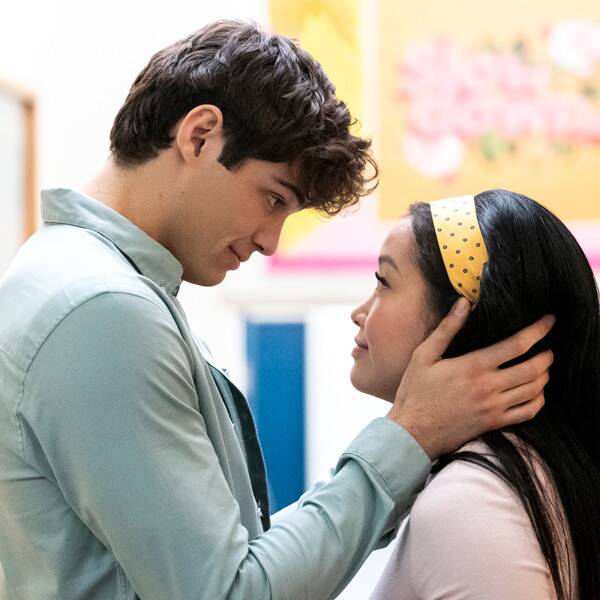 Our favorite on-screen couple is back!

Lana Condor and Noah Centineo are gearing up for the premiere of To All the Boys: P.S. I Still Love You on Netflix, Feb. 12.

Speaking exclusively with E! News, Lana, Noah and the newest addition to the cast Jordan Fisher, gave us all the details on what there is to expect from the highly anticipated sequel to 2018’s To All the Boys I’ve Loved Before.

Taking place a year after pretending to be boyfriend and girlfriend to make Noah’s Peter Kavinsky character’s ex jealous, Lana’s Lara character will be treading uncharted territory as she navigates her first real relationship and learns to deal with the reality of dating the most popular guy in school.

But if that wasn’t hard to navigate already, Lana’s character is about to have her relationship put to the test when John Ambrose McClaren (played by Jordan) comes into the picture.

And of course, there’s no denying or forgetting the on-screen chemistry between Lana and Noah that we couldn’t help but wonder how their on-screen romance has impacted or influenced their real-life relationships—or vice versa.

Lana, who’s currently dating Anthony De La Torre, spoke on how her relationship has impacted her on-screen romance with Peter.

“I think that I’ve been very fortunate to find someone who is so incredibly loving and loves me for all of my mistakes and all of the things that I think are ugly about myself and so I think I brought that into the movie, particularly with Peter,” Lana tells E! News. “He is flawed and that’s important for us to show but to still love someone even if they’re flawed.”

Meanwhile, Noah, who’s currently in a relationship with 22-year-old model Alexis Ren, spoke about how the parallels between his character Peter and himself as a partner.

“You know, [Peter] has taught me… he is so good at sticking it out, you know? Of course, [Peter and Lara] have broken up in the past and they get back together and he’s definitely a monogamist and I think that it is so fantastic how he shows so much respect and so much love and how he’s so present with Lara Jean at all times. I think that’s just so beautiful.”

When asked if he’s also the same way in his current relationship, the 23-year-old actor tells E! News, “I’ve been like that. I’ve always been a very passionate person.”

On the topic of whether it was any more difficult to film the sequel, especially given the major success of the first, Noah simply said, “nothing changed.”

“It was just nice to be able to be back on set but also just nice to be in Vancouver with Lana and with everybody else and the new additions, Like Jordan and Ross Butler,” he tells E! News. “It was special, it was spectacular.”

The actor also stressed how natural it felt to pick back up from where his character and Lana’s character left off. “It was no different, it’s as if we had [filmed] the first [movie] the day before,” he shared.

Of course, E! News also sat down with Jordan, who’s about to shake things up in Peter and Lara’s relationship.

When describing his character and the new storyline, Jordan spoke passionately about author Jenny Han‘s intention to confuse people and challenge them with this new character.

“Jenny wrote a character to confuse people and to challenge people. You fall in love with Peter, you fall in love with Peter and Lara and their connection and whatnot but then it’s like oh wait next story… History. First Love. Accidental. Coincidences. Dang, now through no fault of his own here is John Ambrose and now I also feel for him and want to see it work out with Lara, but like, I also like Peter,” he tells E! News. “What are you supposed to do with that? Jenny does a beautiful job of putting the audience in this situation.”

He adds, “You get to ride the wave of everything that Lara Jean gets to experience and go through. You get to be part of this thing and feel like you’re in the room and in her head and feeling the feelings with her. The parallel of both the audience journey simultaneous to Lara Jean’s is a pretty accurate one.”

Stay tuned to see whether Lara Jean picks Peter Kavinsky or John Ambrose McClaren when To All The Boys: P.S. I Still Love You begins streaming on February 12.