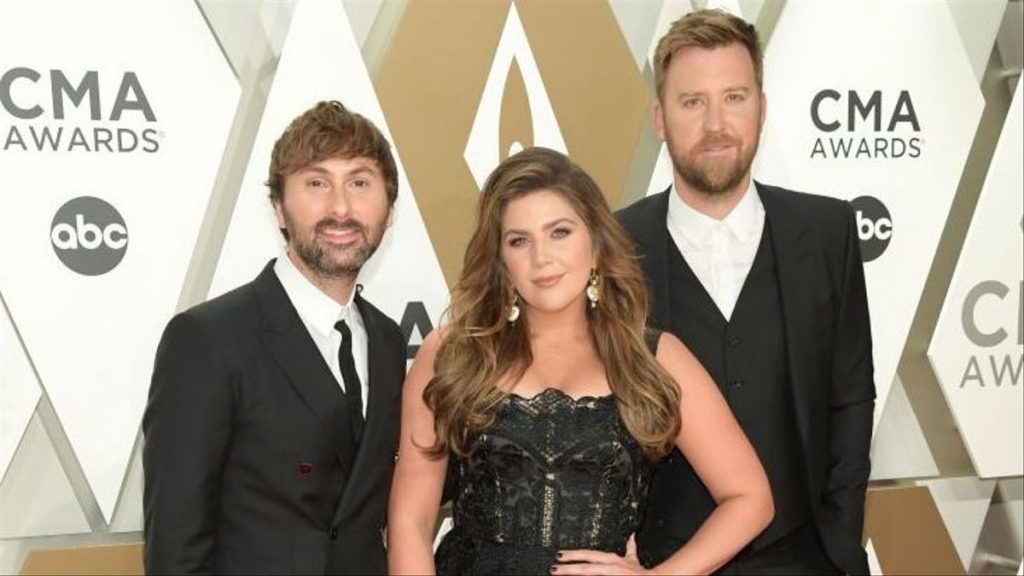 It was a jubilant and grateful Lady Antebellum that stood on stage at Nashville’s Hutton Hotel Monday afternoon (Feb. 3) to celebrate the trio’s first No. 1 single in six years, the mournful “What If I Never Get Over You.” Joining them in the festivities were the song’s co-writers, Laura Veltz, Ryan Hurd, Sam Ellis and Jon Green.

The event was held in the hotel’s Analog showroom, which has also been the site of parties for such other country royalty as Luke Bryan and Keith Urban.

The get-together was jointly sponsored by the three major performance rights organizations: ASCAP, BMI and SESAC.

BMI’s Spencer Nohe served as master of ceremonies and first turned the spotlight on Veltz, Hurd and Lady A’s Charles Kelley. Veltz, he noted, has had three other No. 1 singles (“Drunk Last Night,” “I Could Use a Love Song” and “Speechless”) and has been Billboard’s reigning country songwriter for the past four weeks. She also co-wrote Maren Morris’ “The Bones,” which this week sits at No. 2 on Billboard’s airplay chart.

Hurd, who records for RCA and is married to Morris, has three chart-toppers to his credit, Nohe said, including Blake Shelton and Ashley Monroe’s “Lonely Tonight” and Luke Bryan’s “Sunrise, Sunburn, Sunset.” However, Nohe pointed out, “What If I Never Get Over You” is Hurd’s first No. 1 since moving from ASCAP to BMI, thus earning him an acoustic guitar, BMI’s traditional prize for first-time No. 1 writers.

Although Kelley has his own string of songwriting hits, Nohe recognized him for his 10 No. 1’s as a member of Lady A, which, as Nohe pointed out, have sold nearly 20 million albums since first charting in 2007 with “Love Don’t Live Here.”

Nohe summarized by declaring that Kelley is “a generous, kind and fun-loving dude.”

ASCAP’s Beth Brinker led the crowd in applauding Lady A’s producer, Dan Huff, whose hits as a musician and studio mentor literally run into the hundreds. While Brinker didn’t mention it in her remarks, Huff is credited with playing nearly 20 different instruments on Lady A’s current album, Ocean, ranging from accordion to banjo and bouzouki.

For Ellis, she said, “What If I Never Get Over You” is his first top hit and added that like many other country composers he had “honed his musical skills at church.” Ellis, she continued, has toured as a side man with Hunter Hayes and is co-writer of Ingrid Andress’ “More Hearts Than Mine” and Lady A’s current heart-tugging single, “What I’m Leaving For.”

Just as BMI hands out guitars to its first-timers, ASCAP awards Yeti coolers, one of which Brinker brought to the stage to give Ellis.

Lydia Schultz from SESAC next came forward to praise Lady A’s Hillary Scott and Green. Green hails from England, and “What If I Never Get Over You” is his first country No. 1.

Once the songwriters had been introduced, Scott Borchetta, who heads Lady A’s label group, BMLG, took the stage to present his compliments. “I don’t know if I’ve ever been involved in anything I’ve been more proud of than this record,” he said. Jimmy Harnen, CEO of BMLG Records, announced that “What If I Never Get Over You” has now reached gold status (indicating it has sold 500,000 copies) and that it’s still in the Top 10 in Billboard.

Veltz compared giving a song to others to record and promote is like relinquishing a child. “You’re just kissing the baby and then it’s having fun at college,” she marveled.

“I’ve been coming here (from England to Nashville) for like 15 years,” Green said, “but this feels like my arriving.”

Hurd confessed that he had once promised to sing the song naked if it ever went to No. 1, but diplomatically declined to do so. That was just as well since his pregnant wife stood in the audience. “Just imagining life without you,” he told her, alluding to the song’s theme, “. . . what a horrible inspiration.”

Turning to address the members of Lady Antebellum, Hurd asserted, “You guys are going to be in the Country Music Hall of Fame one day.”

Scott looked around her and said, “There are so many many incredible hearts up here. I’m just overwhelmed.”

But it was Haywood who set the tears flowing — including his own — when he said he and his wife had discussed whether or not to bring their five-year-old son, Cash, to the party. “I think we should bring him to the party,” he told her, and then, with his voice breaking, added, “It hasn’t happened in his lifetime. It’s given us such peace to make music again.”

With that, Kelley announced it was time to sing the song being celebrated. The crowd waited while the stage was rearranged with mics and stools for the trio, the four songwriters and Haywood’s son, who sat enraptured behind him.

What followed was perhaps the most heartfelt and moving performance the song will ever have.