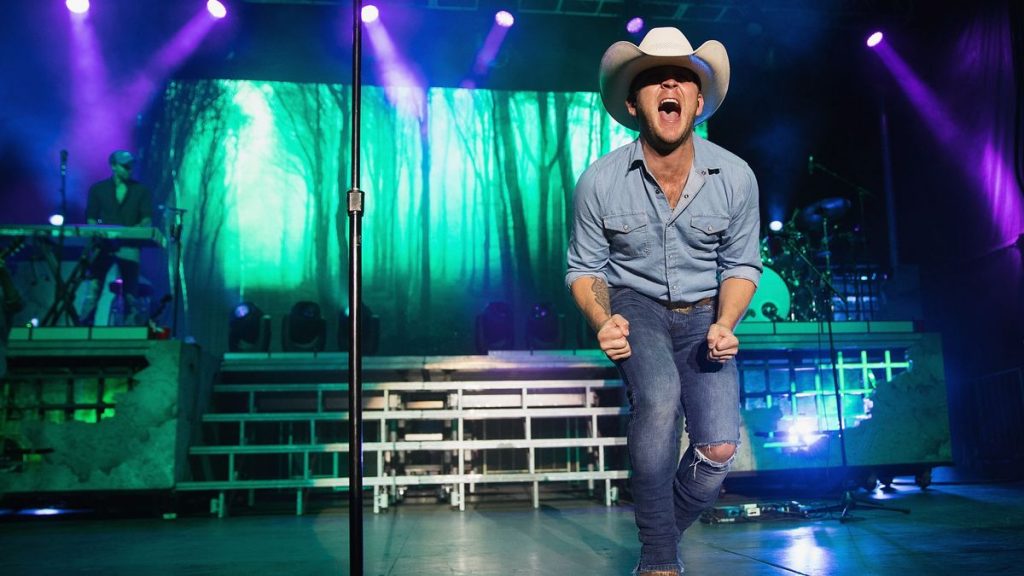 There’s more than one way to get a country song to the No. 1 spot on the charts. You can take some kind of shortcut, or you can take the long way around.

Which is exactly how Justin Moore feels about his latest No. 1 song, “The Ones That Didn’t Make It Back Home.”

At the song celebration on Wednesday afternoon (Feb. 5) at Nashville’s Sutler Saloon, Moore and his songwriters joked about how long it took for this one song to climb. It was released in October 2018.

“At this point, I don’t give a damn how long it takes. They all get there.”

“Since the song came out three or four years ago,” Moore joked, “it’s great from an artist perspective to enjoy the success of a hit song. Your pay goes up a little bit. And you get a little press and this and that. But it’s even more special when you have a song like this. It’s more than just a hit song when you hear from a police chief in a meet and greet, and he tells you about one of his guys he lost in an incident. Or when men and women come up to me in the supermarket and share their stories, and thank me for writing or recording this song. It should be the other way around.

“It never gets old to hear those stories. I feel proud to be a small part of this record,” he added, “and blessed to be able to have a voice in this industry.”

When the song’s co-writers — Paul DiGiovanni, Chase McGill, and Jeremy Stover — took their turn at the mic to share how blessed they felt to be part of what McGill called a power ballad about war, they kept their speeches short. But you could tell their hearts were full.

McGill thanked Jesus for the gifts he’d given him, his co-writers, his family and everyone who worked on the record.

DiGiovanni said that complete strangers have shared their version of the story with him, and that he wasn’t prepared for that. “That’s a really cool thing,” he said, “and I don’t know if I ever expected to be a part of something as moving as this.” He also had a shout out for the Green Bay Packers, saying, “Thank for letting us write this song in your parking lot.”

Stover got chocked up as he thanked those who served and sacrificed, and ultimately inspired the song. As a longtime collaborator of Moore’s, the two men go way, way back to Moore’s self-titled debut album from 2009. Stover produced the album and co-wrote all nine tracks, including Moore’s very first No. 1 song “Small Town USA.”

As Moore said, he shared the sentiments of his three co-writers and everyone else who helped take the song to all the way to the top.

“I echo the thoughts of all three of these guys, obviously. Like Chase said, I want to first and foremost thank my lord and savior Jesus Christ. I don’t think I’ve done that at any of these parties, so thank you for reminding me to do that,” Moore said. “As fun and as awesome as all this stuff is, the proudest moment of my life happened earlier this week when my oldest daughter (Ella )– who’s about to be 10 — got saved and has Jesus in her heart.”