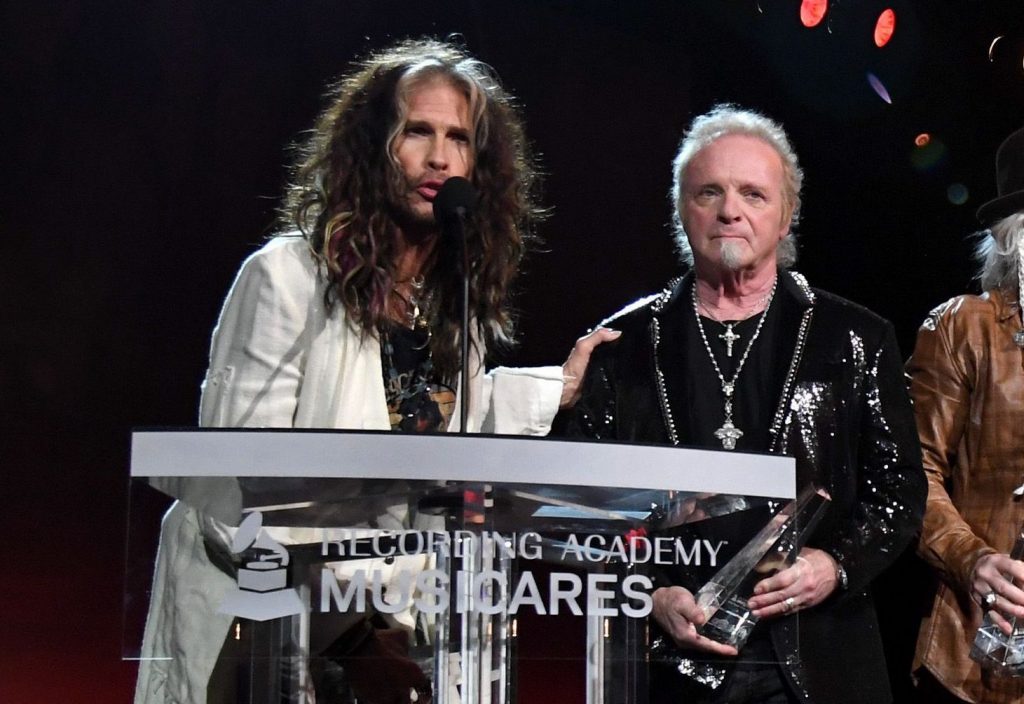 
Estranged drummer Joey Kramer did not perform with Aerosmith when they were honored as 2020’s MusiCares Person of the Year, but he did join Steven Tyler, Joe Perry, Tom Hamilton, and Brad Whitford at their table and onstage at MusiCares’ Grammy gala, which took place Friday at the Los Angeles Convention Center. This awkward mini-reunion followed a whirlwind of drama that had recently culminated in Kramer taking his bandmates of 50 years to court.

Last year, Kramer suffered an injury that forced him to take a leave of absence and sit out Aerosmith’s Las Vegas residency while his drum tech filled in. When Kramer attempted to rejoin the group, he was told that his playing wasn’t up to snuff after so much time off, so he would not be allowed to play with Aerosmith at either the MusiCares event or at the 62nd Annual Grammys Awards on Jan. 26.

“Joey Kramer is our brother; his wellbeing is of paramount importance to us. However, he has not been emotionally and physically able to perform with the band, by his own admission, for the last six months. We have missed him and have encouraged him to rejoin us to play many times, but apparently he has not felt ready to do so,” Aerosmith said in a statement. “Given his decisions, he is unfortunately unable to perform, but of course we have invited him to be with us for both the Grammys and our MusiCares honor.”

Kramer then filed a breach-of-contract lawsuit in an attempt to be reinstated in the lineup (in the court documents, he claimed he had been asked audition for his old job to prove he could play at “an appropriate level”). But just two days before the MusiCares gala, a Massachusetts judge ruled against Kramer. This week, TMZ posted footage of the drummer showing up at Aerosmith’s L.A. rehearsal space and being turned away by security guards.

Still, he did show up to the gala Friday, and while his time onstage with his bandmates was brief and a bit uncomfortable, there was still clear affection between the band members. (“They are brothers; they refer to each other as brothers, and they even fight like brothers,” Tyler’s entertainment lawyer, Dina LaPolt, explained earlier in the night.) Kramer was actually the only band member besides frontman Tyler who delivered a speech at all.

Tyler placed his hand on Kramer’s shoulder as the two stood at the podium together, while a stiff Kramer stated, “A shoutout for love and gratitude — to MusiCares, to all our fans, to my partners, to my forever-supportive wife Linda, and to you guys out there and the music industry.” Kramer then exited the stage, while Aerosmith proceeded with their three-song, Kramer-less set, starting with a somewhat shambolic “Big Ten Inch.” Grammy darling H.E.R. joined the band for “Dream On,” and Aerosmith guitarist Joe Perry’s Hollywood Vampires supergroup bandmates Alice Cooper and Johnny Depp came out for the finale of “Sweet Emotion,” but Kramer never returned to the stage. However, Tyler did call out, “Joey Kramer, where are you? We love you, man!” while introducing all of the band members at the end of the show.

The lack of fanfare made for an anticlimactic and unemotional evening — especially considering that this year marked the 30th anniversary of the MusiCares Person of the Year tribute (one of Grammy Week’s annual marquee events), and that the organization’s Chair Emeritus, Michael McDonald, has credited former Aerosmith manager Tim Collins for linking him up with MusiCares, helping him get sober, and saving his life. (MusiCares, the Recording Academy’s charitable arm, provides critical assistance for member of the music community in times of need.)

Still, the all-star event, affably hosted by 17-years-sober comedian and activist Russell Brand, did raise $6 million for MusiCares, and it did feature some standout performances, many by female artists. Ashley McBride delivered a fun and fierce “Dude (Looks Like a Lady)”; Best New Artist nominee Yola wailed on a standing-ovation-garnering “Cryin’” while Gary Clark Jr. accompanied her on bluesy guitar; and guitar goddess Orianthi, filling in at the last minute for John Mayer, displayed her impressive chops while accompanying Sammy Hagar on “Back in the Saddle.” The most riveting moment came courtesy of assault survivor Kesha, whose strings-backed rendition of “Janie’s Got a Gun,” a harrowing power ballad about child abuse, was a tour de force. (On Friday, MusiCares also honored Tyler’s Janie’s Fund, a charity for abused and neglected girls.)

Other highlights were Cheap Trick’s “Rats in the Cellar”; John Legend’s “I Don’t Want to Miss a Thing” (while that song’s composer, Diane Warren, adorably shot the performance on her cell phone); a very enthusiastic Foo Fighters blasting through “Let the Music Do the Talking” and “Toys in the Attic”; and Gavin DeGraw, who completely undersold his performance of “What It Takes” by saying, “Are you ready to hear this in a lower key and not as good?” before ending up in the audience singing an impromptu duet with Tyler and totally holding his own. Other performers included the Jonas Brothers, Emily King and Luis Fonsi, Melissa Etheridge and Nuno Bettencourt, LeAnn Rimes, and Jessie J.

The MusiCares Person of the Year award recognizes musicians for their artistic and philanthropic achievement, with the annual ceremony raising money for the foundation. In the past 30 years, the organization has raised more than $150 million. Previous honorees have included David Crosby, Elton John, Bono, Aretha Franklin, Barbra Streisand, Paul McCartney, Bruce Springsteen, Bob Dylan, and Dolly Parton.