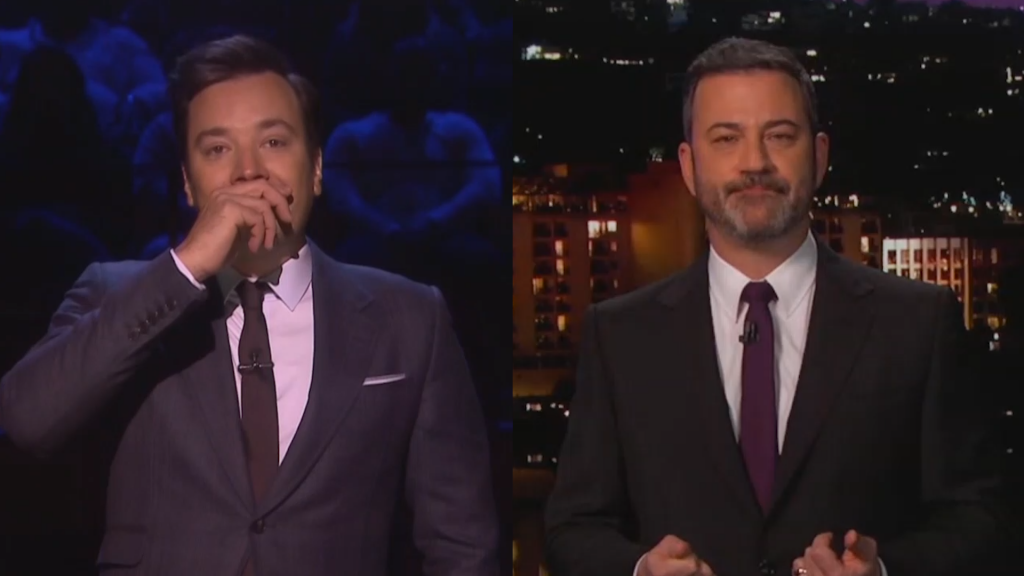 One day after a helicopter crash claimed the life of NBA legend Kobe Bryant, his 13-year-old daughter Gianna and seven others in Southern California, Jimmy Fallon and Jimmy Kimmel gave emotional tributes to their longtime friend.

Fallon opened The Tonight Show by telling the story about the first time he met Kobe. Fallon was just getting started in comedy and Kobe was a rookie on the Los Angeles Lakers. They met at a party and went on a beer run together that was only successful because Kobe was on the Lakers.

“When we’d run into each other over the years we’d laugh about that night that we first met,” Fallon said as he could no longer hold back the emotion. “We’d laugh at all the good things that happened since. We’d laugh about how fun it was to raise kids and all the stupid mistakes we made trying to figure out how to be good dads. And Kobe had four daughters and I had two daughters. And today, he and one of his girls are gone.”

“Tonight’s show is going to be different from our usual show,” Kimmel said in the quiet studio. “We don’t have a studio audience here tonight because going forward with a comedy show didn’t feel right considering what happened yesterday.”

The guests were canceled, there was no audience and there was no band. Kimmel honored Kobe by using the entire hour to air some of Kobe’s appearances on the show. He spoke about who Kobe was as a person and as a father. He spoke about how Kobe was there for him when his son had heart surgery. And like Fallon, Kimmel was overcome by the incredible sadness of the situation.

“There’s no silver lining here,” Kimmel said. “It’s all bad. It’s all sad. He was a bright light and that’s how I wanna remember him.”

Check out the footage of LeBron James the BBC showed while reporting on Kobe Bryant: