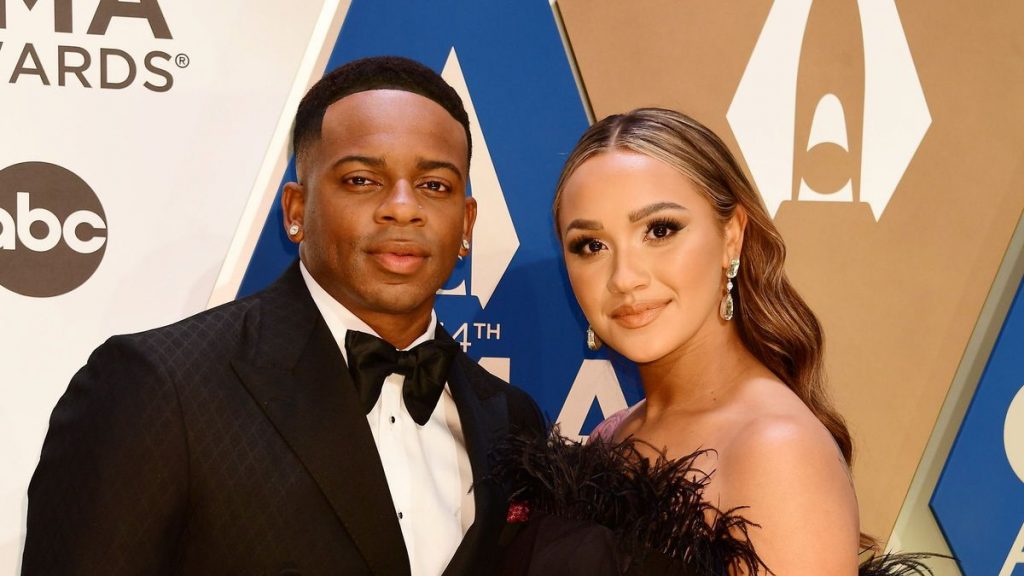 Jimmie Allen and his wife Alexis opened up about marriage, life and parenting for PEOPLE’s family issue. The couple held a public wedding ceremony with family and friends in May 2021 in their shared homestate of Delaware, but revealed to PEOPLE that they actually wed during a private ceremony on June 18, 2020–which happened to also be Allen’s birthday.

“We’ve actually been married for a year,” Alexis told the outlet, adding, “Actually being publicly Mr. and Mrs. has been really exciting! I thought it was going to be the same, but I feel like it’s a new honeymoon stage for us. We get to wear our rings out in public.”

They are parents to 17-month-old daughter Naomi Bettie, 7-year-old Aadyn, from Allen’s previous relationship, and will soon welcome another daughter this November.

He says his relationship with Alexis changed his outlook on marriage.

“I wanted to be a dad and do music, that’s it. I never wanted to get married,” Allen said. “The whole husband thing was not something I ever wanted to do. But Alexis changed that. Now, I like it. It gives me some security — she can’t just be like, ’I’m done.’ Divorce is a lot of paperwork!”

Allen also shared that he received some solid relationship advice just prior to the passing of his father, James Allen, in late 2019.

“Before my dad died, he was in the hospital. Lex came and she met my dad, and he liked her. He pulled me to the side, and said, ’Listen, you mess up a lot when it comes to relationships. Don’t let this one go.’ I said, ’All right.’”

Alexis revealed that early on in her relationship with Jimmie, she knew it was a good sign when Allen made her career goals a priority even as he was working toward his own aspirations as a music artist.

“When we met, I was just graduating. I had to study for my NCLEX to officially become a nurse. And he took the time, right before he went on tour, to study with me even though he had no idea what he was doing. And it made me realize — this is someone who really cares about me, who cares about my future even though he’s still working on his,” she said.