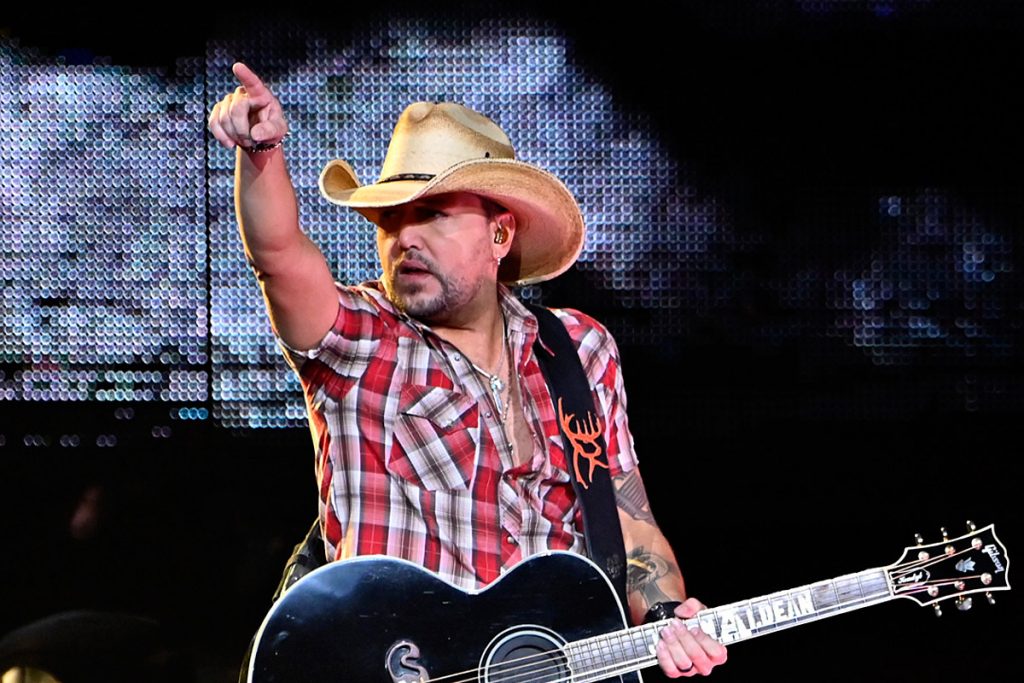 
Jason Aldean and his family decided to blow off a little pandemic steam with a trip to Walt Disney World in Orlando, Fla. this weekend, but when the singer posted a photo of the crew at the park, all dressed in coordinating Mickey Mouse tees, to social media, a few fans got a bit heated under the collar at the lack of what they didn’t see in the shot.

Aldean, wife Brittany, son Memphis, and daughters Kendyl, Keeley, and Navy all grinned for the camera to commemorate what Aldean termed a “perfect day.” As he captioned, “There is Nothing like seeing ur kids faces when u walk in that place.”

So what was the problem? Nobody was wearing a protective face mask in the photo, per Disney’s park mandate, which several commenters were quick to call out.

One fan was particularly heated: “Wtf are your masks? Everyone is required to wear them? WTH who do you think you are? I’ll never buy your music ever!!!” she wrote.

Aldean clapped back immediately: “Chill out lady. They are in our pocket. We took them off for 5 seconds to take the pic. Believe me, Disney didn’t give us a ‘free pass’ not to wear them. We had them on all day just like everybody else.”

He then advised her to “just enjoy the picture” and to “stop over analyzing.” (For what it’s worth, it’s pretty plain to see that Aldean’s second-oldest daughter, Kendyl, has what appears to be a mask clutched in one of her hands.)

Indeed, Aldean doesn’t seem to be the type who would deliberately try to break Disney’s mask policy. He admits that wearing a mask can be a pain, but that he also finds a bright side to it as a celebrity in that it allows him a little bit of privacy. As he recently told Taste of Country Nights, “The mask, as much as I hate ’em, has been kind of cool because you kind of blend in with everybody else.”

Aldean’s wife Brittany posted the same photo to her own Instagram account, equally raving about the Magic Kingdom’s hospitality, but was careful to add the disclaimer: “Only took masks off for pic.”