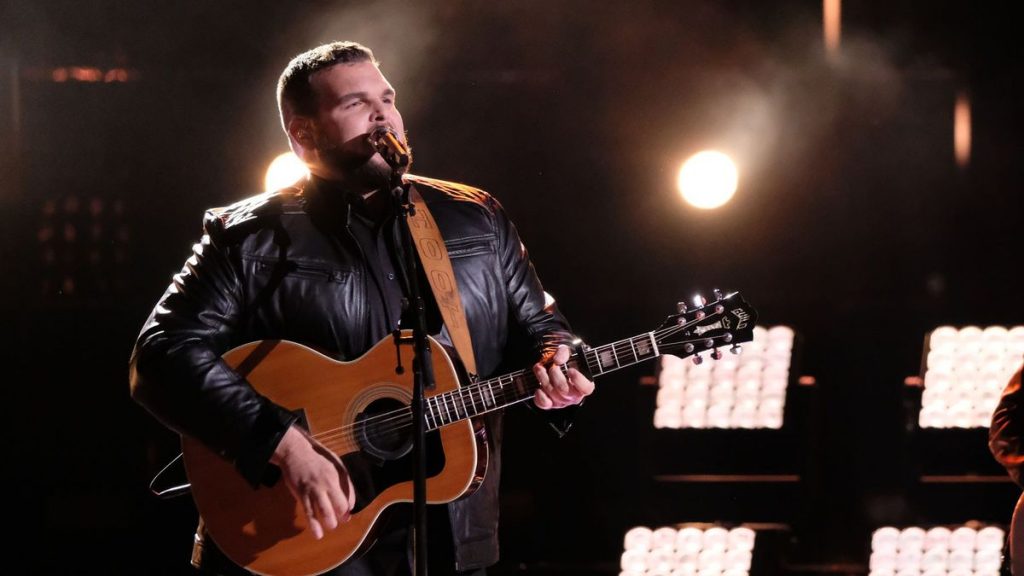 Jake Hoot: The Backstage Q&A at the Opry

On Tuesday night (Feb. 4), Jake Hoot did something he’s never done before.

He took the stage at the Grand Ole Opry to make his debut, just about six weeks after his big win on The Voice on December 17. And while he admitted that nothing could be quite as nerve wracking as playing for the backs of those now-iconic four red chairs, Hoot was still a little uneasy about walking onto the legendary circle of oak on the Opry stage.

“In the sense of being absolutely terrified,” Hoot told me when we caught up backstage at the Opry before his debut, “it would be singing to the backs of those four chairs. But I will say there’s more of a spiritual sense here at the Opry. You just know it’s something special. There was something about walking out on the stage today that had me crying like a baby. I was looking around at all the sections, being like, ’I sat there. I sat there. I sat there.’”

“So to be on the stage knowing I get to play, it’s like there’s this humbling spirit about it. And I wonder if that oak circle could talk. Imagine the stories it could tell. I’m nervous about tonight, but it’s a different kind of nervous: I want to give it my best and stay humble about it.”

Beyond his reverence for the Opry, Hoot shared with me everything that made him the man he is today.

CMT.com: You grew up with eight siblings. What was that like? Did that kind of a big family shape you into the man you are now?

Hoot: We had our own baseball team. We had our own football team. So the combination of that, and growing up in a third world country, and having the kind of parents my parents were — that all played into it. My family definitely gave me that drive. And I’m the second oldest, so naturally I’m very protective.

I know you learned to love music when your family was living in the Dominican Republic, but you’ve been a little bit of everywhere, right?

All because your parents were doing mission work. What role models they must’ve been for you and your brothers and sisters.

The way we grew up made me who I was. I was blown away when we got to the United States and we had electricity 24,7. And I remember when one of my brothers stepped on grass for the first time when we were in the U.S., and he was like, “Dad, what is this?” We just weren’t used to that kind of stuff, and that influenced me. There were moments when I thought that the things my mom and dad did were the norm, and then come to find out that there’s not a whole lot of people like that.

Are you trying to follow their lead, and set that same kind of example for your own girls?

I’ll never be as selfless as my parents are. But you strive to be. As a parent, that’s obviously something you pray for. I pray my girls Macy and Hadley will always put others first. Next month, I’m going on a mission trip to Nicaragua, and I want them to see that. But you also can’t force anybody to give back. They just need to see that not everybody is well off, but that doesn’t mean they’re any less happy. That’s something I pray about every day.

I know you have called Cookeville, Tennessee home since you went to college there. But with a future in country music, have you thought about making the move to Nashville?

No ma’am. Cookeville has been great for me. It’s so beautiful, and the people are so kind and so giving. It’s growing, but still has that small town feel. It’s a very special place. I thought I’d want to leave after I graduated from Tennessee Tech, but now I don’t know why I’d ever want to leave.

Let’s talk about that decade between college graduation and The Voice. What were you doing for a living?

During college breaks, I’d worked in a zinc mine, on a demolition crew in New Orleans, then with an electric crew in Houston. So I stayed busy. And then when I graduated, I had offers to teach, but I really wanted to get out and do something outside the classroom. So I started doing electrical work, and did that for a while. Then I got a job in heating and air, and did that for a while. And then I heard about a job opening at the radio station one day, and thought that would be a good opportunity. I’ve been there for six years now.

Wait. You have a day job?

Yes, ma’am. I’m a sales executive for the radio stations in Cookeville (WGSQ and WKSW). Being on The Voice has been hard because I love spending time with my clients. Just going to sit and talk and catch up and what not. It’s all about building those relationships. God tells us to be good stewards of what were given, and so I actually want to see my clients succeed. But now, I get there and people want to take pictures and get my autograph. Which is awesome, and I’m grateful, but that makes it hard to get my work done.

While you were on the show, you chose some really solid country songs. Ones that were a little obscure, and aren’t the obvious modern country go-tos. Did you choose those tunes, or did they choose you?

In some situations, you don’t have any say. In some, Kelly (Clarkson) gave me complete control. I think her being in our shoes before gives her a different kind of appreciation for what we’re doing. She would come up to us and say, “What song do you want to sing?” She gave me a ton of creative control. I’d always think, “If I make it past this round, I want to do this song.” So when it came to “That Ain’t My Truck,” there’s such a hunger for that kind of music right now. Luke Combs is bringing that style back. It’s not flashy. You just get out there and sing what’s in your heart.

I can see a lot of similarities between you and Luke Combs. And obviously, when you chose his “When It Rains It Pours” for you blind audition, you must’ve been confident that that was the kind of thing that would make you get someone to turn around. Were you surprised that Blake Shelton did not?

No. Because honestly, I went into the whole thing thinking it was fake from the get-go. Every step of the way I was like, “This is fake.” Until they flew me out to LA for the first time. But even then I was like, “I’m not gonna make it.” There was so much talent. You hear all that and think that there’s no way. All I wanted to do was give it my best shot. I wanted a chance to be on that stage. That’s all. Even if nobody turned around. When I started the song, though, I did start hoping Blake would turn around. Just because I love him and his music. Then when Kelly turned around, I was like, “I’m still in this thing somehow.” Of course, Kelly told me that later on Blake was kicking himself.