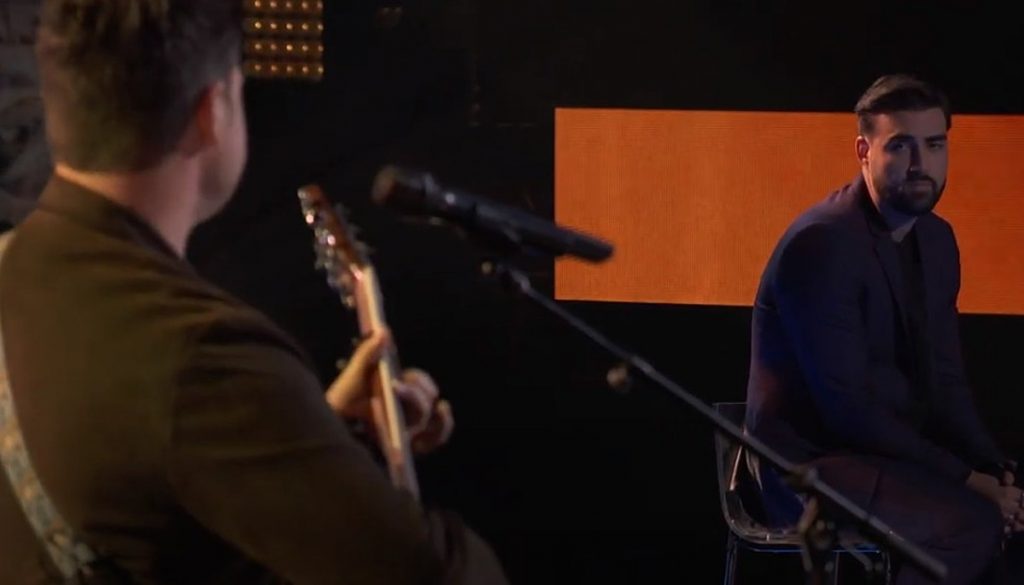 
Monday night on The Voice (Nov. 23) saw a continuation of the season’s Knockout rounds, which have coaches Blake Shelton, Kelly Clarkson, John Legend, and Gwen Stefani pair up their artists to square against each other on songs of their own choosing.

Shelton’s second Knockout of the night paired up Ian Flanigan and James Pyle. Flanigan, an “inappropriate!” favorite of Clarkson from the previous week, chose a crowd-pleasing “Crazy Beautiful” by Luke Combs, which he delivered, as per usual, while strumming his guitar.

Pyle followed this with a short and tight version of Shawn Mendes’ pop hit “In My Blood.” While he gave a fully immersed performance, like the evening’s previous Shelton matchup, the country choice seemed to garner way more favor.

Legend termed both vocalists “fantastic,” but quickly picked a side. He noted that “Ian, we were marveling at the gravel in your voice. A lot of times singers that can do that, don’t have the range that you have.”

Speaking of range, Legend also did take the time to praise Pyle, saying he was jealous because “I can’t hit those notes.”

Stefani, who seemed fixated on dancing (after watching Shelton’s Jus Jon do some fancy footwork earlier in the evening), asked Pyle if he could dance. “Not at all,” blurted the vocalist. That said, “I think they are both super talented,” Stefani hastily noted.

Clarkson was definite in her direction. “I always end up floating toward you,” she unsurprisingly leaned toward Flanigan (whom she was lavish with the praise on last week).

“It’s exciting to see this enthusiasm and see the talent that you have,” Shelton himself directed towards Pyle, but also unsurprisingly switched immediately to praising Flanigan.

“There’s got to be somebody you sound like,” he raved. “Do you drink boiling water?” he mused. “It’s unbelievable.”

Any surprise that Shelton went ahead and called it for Flanigan? We didn’t think so.

The Voice airs every Monday and Tuesday on NBC beginning at 8PM ET.