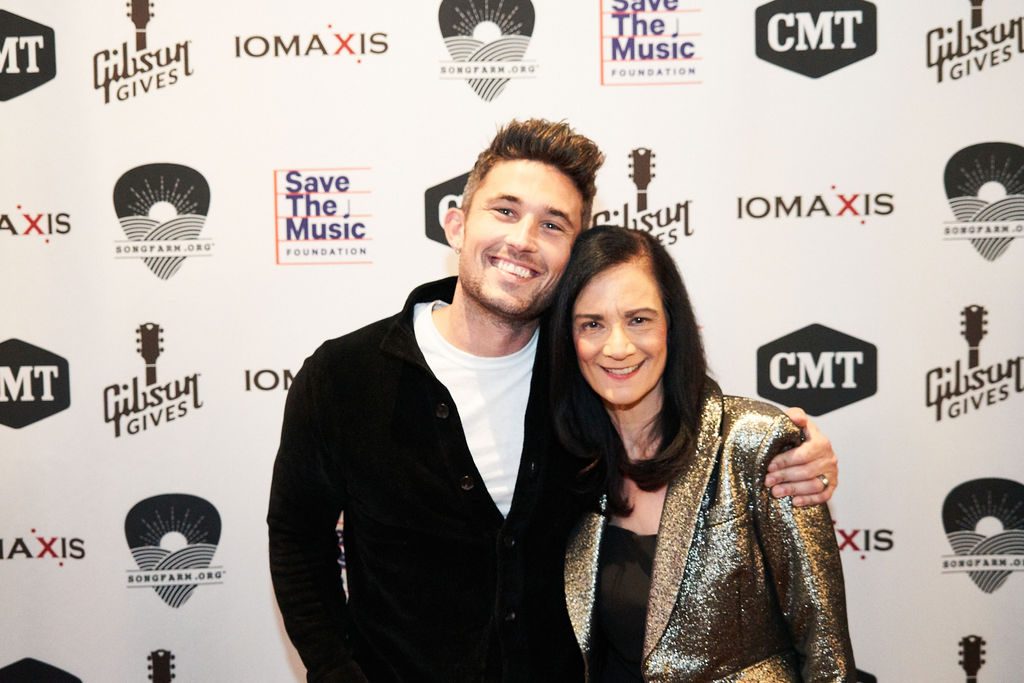 NASHVILLE, TN – On February 13th, Save The Music and SongFarm.org rallied Nashville’s songwriting and producing community together at the inaugural “Hometown to Hometown” event. The night was full of emotional speeches and intimate musical performances, with over $200k in proceeds raised to benefit new music technology programs in public high schools both locally and nationwide.

Hosted by CMT’s Leslie Fram, the evening honored GRAMMY-nominated songwriters and producers Ross Copperman and Nicolle Galyon as the “2020 Champions of the Year.” The pair were celebrated for their tireless work to champion music education and their commitment to giving back to their hometown music programs in Virginia and Kansas, respectively.

“The
award for me is the gift I get to give to my hometown. It’s my
everything,” said Galyon, referencing Sterling, Kansas. She was
introduced by
Ben Vaughn, President & CEO, Warner/Chappell, who shared
heartfelt sentiments about her authenticity, dedication, and
unparalleled talent that has touched so many others. Galyon expressed
how honored and humbled she was for the honor and her gratitude
that funds were allowing a creative outlet for students, something she
herself needed at an early age. “What I was wanting was someone to hand
me a blank page and ask me what I wanted to put on it,” she shared.

Copperman
reiterated her sentiments and praised the work of both SongFarm.org and
Save The Music to give students opportunities and tools to succeed.
“This whole thing is not about me at all. It’s about
Save The Music.” He was introduced by friend and colleague, Josh Van Valkenburg,
Senior Vice President, Nashville A&R,
Sony/ATV, who echoed Copperman’s selfless nature and influence on the
industry and beyond, particularly with students at his alma mater in Roanoke, Virginia.

The most moving speech of the night came from
Steve Franco, Copperman’s drama teacher at Glenvar High School,
who talked glowingly about Copperman and the impact he has had on
students through
SongFarm.org, co-founded alongside GRAMMY award winner
F. Reid Shippen. “He doesn’t just talk about it, he does
it,” said Franco, referencing the Copperman’s mentorship and the full
recording studio recently donated to the school. “Magic doesn’t happen
unless you give students the tools,” he continued,
before introducing two Glenvar students, Tyler Johnson and John Strausbaugh,who were on-hand to share their personal experiences with
SongFarm.org and snippets of music they’ve been able to create in the
donated recording studio. Franco wrapped up his highly emotional speech
by thanking both Galyon and Copperman for pushing students
toward their fullest potential, giving them wings to fly and providing
them with the necessary tools for discovery, self-worth, and a creative
outlet through music.

The evening also included many noteworthy performances, including singer-songwriter Michael Ray who performed his new single, “Her World or Mine” and also shared the healing impact music had on his life at an early age. He called out to Tyler and John and reminded them, “You are the future!” Emily Weisband also took the stage to perform “Getting Good,” the song she penned for Lauren Alaina, while Blessing Offor delivered a chill-inducing performance of his song, “Chasing Spirits.” Copperman performed several of his most well-known songs, including Kenny Chesney’s “Setting the World on Fire” and Blake Shelton and Gwen Stefani’s newest duet, “Nobody But You,” while Galyon performed her hit songs “Tequila,” co-written for Dan + Shay and Kelsea Ballerini’s “homecoming queen.”