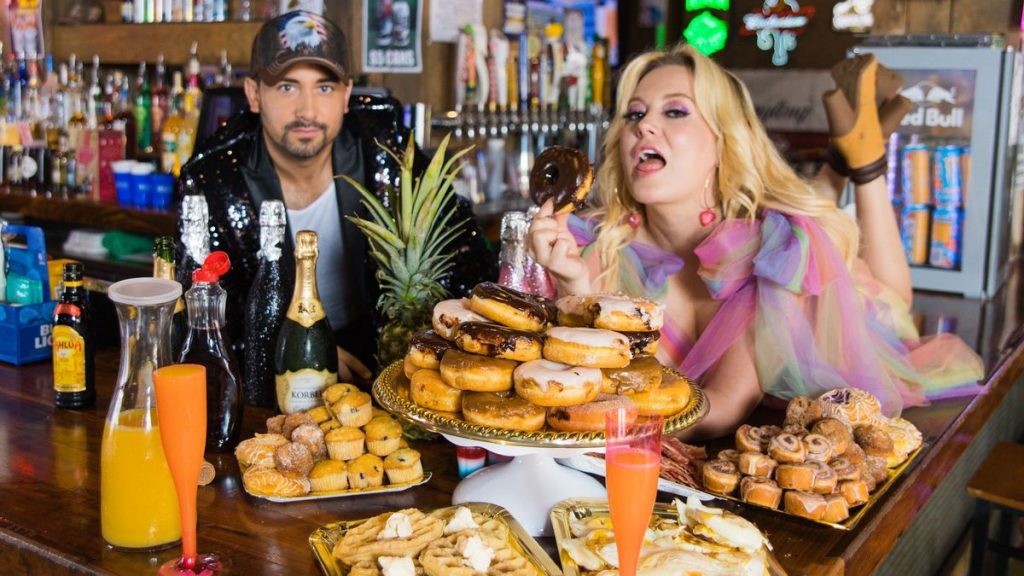 Hasting & Co. Get “Brunch Drunk” on Frosted Donuts and Mimosas

How about a little splash of orange juice in your cute flute of Champagne? Then let’s raise a glass to “Brunch Drunk” from Nashville’s Hasting & Co.

Check your shoes, then take a look at the outrageous video from the duo’s Kate Hasting and Josh Beale. Don’t miss our exclusive Q&A below the player.

What do you remember most about this video shoot?

The most memorable part of the shoot was the amount of support we received and the people that showed up. Most of our friends had been out until 4 am the night before partying their way through the CMAs and still managed to arrive. We like to think they were just getting into character.

The support behind this song has been unreal. Other memorable moments were the bachelorettes laying down in plates of donuts, smashing White Claws in their faces, and taping toilet paper to the bottom of one girl’s shoe to resemble the shenanigans of a typical bachelorette party on Broadway.

We have watched the brunch phenomenon sweep not only Nashville, but all of the cities we’ve played. We have had so much fun hearing all of the stories from our friends and fans about their wild bachelorette parties and the brunches that followed the next day. Logen Christopher helped us take all of their stories and capture our favorite parts in under three minutes.

I don’t know about y’all, but we’ve personally walked out of the bathroom with toilet paper stuck to our shoes, we have misjudged the ratio of orange juice to Champagne in a mimosa, and we have all too eagerly, drunkenly, eaten a donut the morning after a party. We wanted all of the props to be over-the-top and the coloring to be bright. We wanted to stay true to our country roots, but push the envelope. The video is meant to be a three-minute escape. It’s meant to feel like one big party.

We’ve had a really crazy past year that at times has felt like an emotional roller coaster, specifically with both of our dads passing in such a short time period. This song has been such a cathartic turning point for us, realizing life is too short to be sad and not to enjoy every moment.

It’s been amazing watching the response from fans every single time we perform it — we consistently have people come up after shows to tell us that “Brunch Drunk” describes them, or their mom, or their aunt or cousin. We’re looking forward to seeing people relate, and to hear their own experiences of getting “Brunch Drunk”; and hopefully it’ll inspire some really crazy and memorable brunch moments in the future! Or maybe they won’t be memorable, depending on how many mimosas are involved…

This is the most excited we have ever been about a music video. Logen is so willing to trust our (sometimes over-the-top) ideas and bring them to life. We were also pumped to have Jedd Wyatt along for the ride, post-Bachelorette filming.

In a lot of ways, this song and this video are the most true to ourselves we’ve ever been. Our songwriting and our vision for the songs we release are heavily influenced by both the farms we grew up on, and the comedic writing of legends like Brad Paisley and Little Jimmy Dickens. “Brunch Drunk” is the first time we feel like we hit the nail on the head sonically, lyrically and visually.