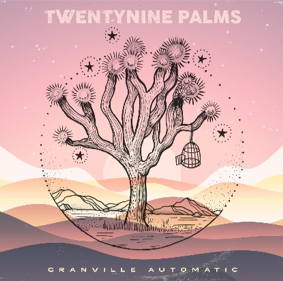 The Boot just listed it in “Twelve New Songs You Need to Hear”.

The song was inspired by the band’s time in the desert in Joshua Tree National Park, as well as the award-winning book of the same name by Deanne Stillman about a murder in the nearby city of Twentynine Palms. Songwriters Vanessa Olivarez and Elizabeth Elkins self-produced the song at Blackbird Studio last fall, during the sessions for their upcoming EP, which will be released later this year in conjunction with their first book, The Hidden History of Music Row (The History Press). The recording features a 19th-century wind machine.

“This song is a hymn to the ghosts,” said Olivarez, “Joshua Tree is a place of magic for me, it encompasses the spirit of wanderlust and centuries-old stories waiting to be told, which is at the heart of who we are as a band.”

Granville Automatic has released four albums and numerous singles. The two are accomplished songwriters outside of Granville Automatic, having penned songs for Wanda Jackson, Angaleena Presley, Sugarland, Billy Currington, Kira Isabella, Ruby Boots and others. They have appeared on PBS’ Sun Studio Sessions and DittyTV. Additionally, their songs have been used in more than 40 television shows, and their videos air on CMT. They’ve been featured in The New York Times, USA Today, No Depression, The Tennessean and Rolling Stone Country.