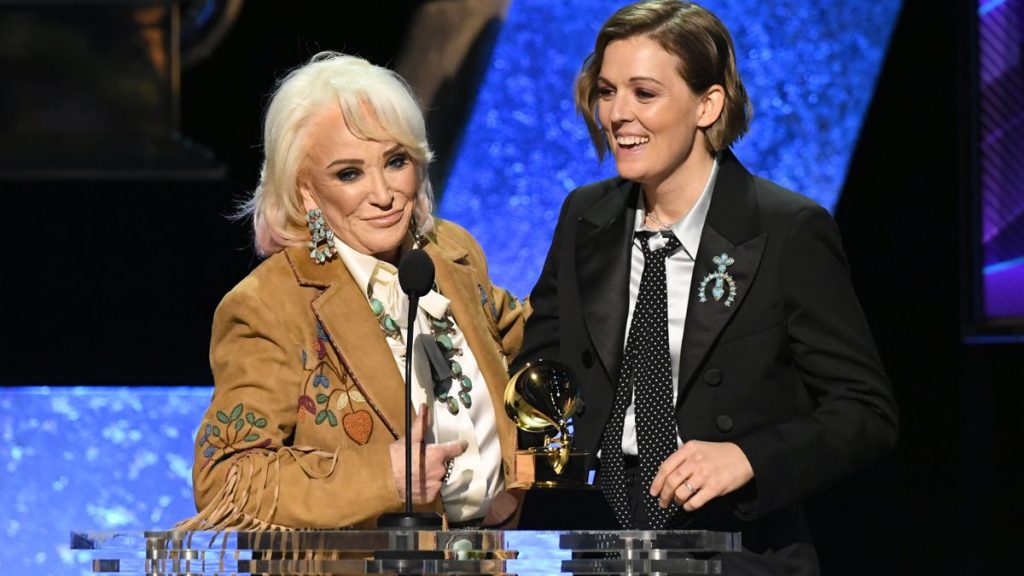 Grammy Awards: The Countriest Moments of the Whole Show

When the 62nd Annual Grammy Awards got started on Sunday night (Jan. 26) on CBS, there was a moment of silence for Kobe Bryant and his 13-year-old daughter who both died in a helicopter crash that morning. But when the silence was done, the music took over to start healing the heavy hearts of the fans at the Staples Center in Los Angeles, where Bryant played for the LA Lakers for two decades until he retired in 2016.

One of the first performances, and absolutely one of the most highly anticipated for country fans, was the “Nobody But You” duet from Blake Shelton and his girlfriend Gwen Stefani. Shelton started the ballad alone on stage with his guitar before Stefani joined him for the rest of the song. She was wearing what some fans on social media were calling a wedding-gownish dress. The couple performed the entire ballad staring into each other’s eyes while holding hands. The song was written by Ross Copperman, Shane McAnally, Josh Osborne, and Tommy Lee James.

Country took another turn on the Grammy stage when Dan + Shay’s “Speechless” won the award for best country duo/group performance. When they eventually made it up the steps to the stage, they were a little breathless, but not at all speechless.

The duo’s Dan Smyers started by offering to put his heart up to the microphone. “You can literally hear (my heart) beating out of my chest right now. This is one of the coolest moments ever. Thank you to my wife Abby for inspiring this song, for inspiring every song we write, for inspiring everything we do in our lives. This is an absolute dream come true,” he added after thanking everyone on their team.

Tanya Tucker was the only other country performer of the night, and she was a solid choice. With her signature raspy vocals backed only by her collaborator Brandi Carlile on the grand piano, Tucker shared the moving and haunting song she says she started writing four decades ago.

Earlier in the day, during the Grammy Awards Premiere Ceremony — the non-televised prelude to music’s biggest night — Tucker was one of a handful of country stars to come out on top.

Willie Nelson won for best country solo performance for his song “Ride Me Back Home,” but was not there to accept the Grammy.

For the next two categories, though, Tucker showed up.

When her song “Bring My Flowers Now” won the Grammy for best country song, she and co-writer Carlile ran hand-in-hand up to the stage to accept the award along with their co-writers, Tim Hanseroth and Phil Hanseroth.

“Thank you so much. After almost 50 years in this business, after many dreams, it’s unbelievable to me that I’d still have a few firsts left. After 14 trips, 14 nominations, this is the first win. And I can’t believe it,” Tucker said as she thanked her team and her collaborators for helping her finish the song she says she started over 40 years ago. “No matter how young or old you are, never stop following your dreams.”

Carlile was beaming as she let Tucker take the spotlight. And when it was her turn to share that spotlight, she couldn’t help but remark on Tucker’s age and gender, both of which can be strikes against you in the music industry. “This song is the story of her life. And it’s one of the great honors of my life to stand up here next to you while you get your first Grammy at 61 years old,” Carlile said. “A woman in country music, leading the way.”

Tucker didn’t get far from the stage before her name was called again. This time, for her entire album While I’m Livin’, which won the Grammy for best country album.

Tucker told the crowd that she was at a friend’s ranch in South Texas talking on the phone to Shooter Jennings (Waylon’s son) about the potential album, and she told him that she didn’t think she was going to be able to do it. “He said, ’You always said you would do anything in the world for me. Just do this for me.’ And I did. And I met Brandi (Carlile), and I’ve never know such a talented person in my life. I’m so honored, there are no words.”

Other early winners were Dolly Parton and For King & Country for their collaboration on “God Only Knows,” which won the Grammy for best contemporary Christian music performance/song. And the award for best song written for visual media went to “I’ll Never Love Again” — written by Natalie Hemby, Lady Gaga, Hillary Lindsey and Aaron Raitiere — and recorded by Lady Gaga & Bradley Cooper for A Star Is Born.

“Thank you so much. We went out to write with Lady Gaga for this movie. We didn’t know if we would actually get a song in the film. I just want to thank my husband for holding down the fort while I was gone,” Hemby said first. “Thank you Nashville, thank you Lady Gaga, thank you Dave Cobb,” Lindsey added quickly. When it was Raitiere’s turn to talk, he got through his long list of thank yous before Hemby shared with the audience that he’d lost his phone in their Uber on the way to the show.