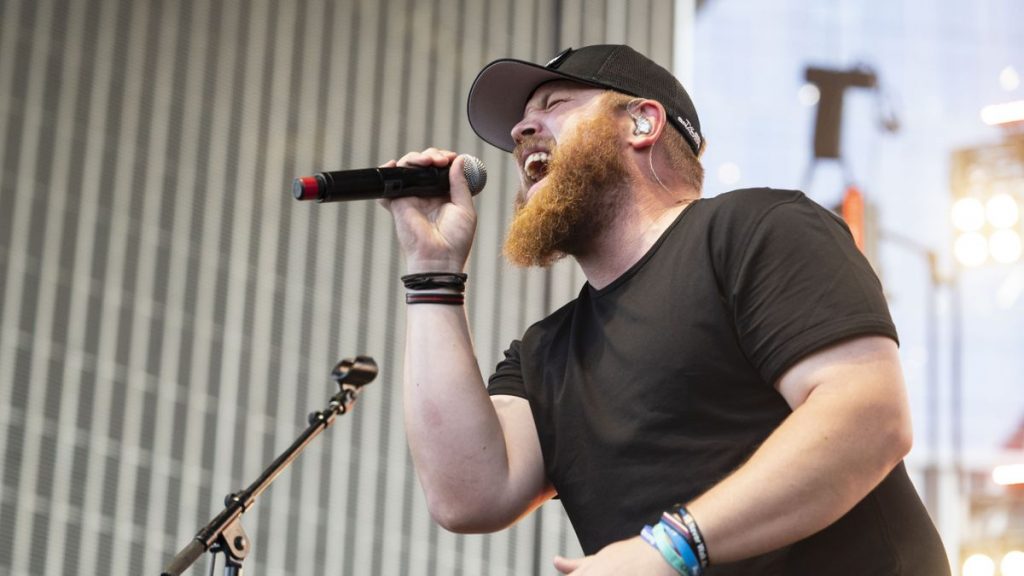 Before Tyler Braden lit the country music genre on fire with his powerhouse vocals, he was putting out flames across Nashville as a first responder.

The firefighter turned country breakout star was far from an overnight sensation, as Braden spent several years chasing his music dream. When he wasn’t aiding the civilians of Music City, he was performing at local hotspots or wiggling his way into elite songwriting circles. The Alabama native is now known as one of the fastest rising musicians in the honky tonk town. CMT caught up with Braden to speak about his career change, how A-listers became mentors, and the primary motive behind his artistry.

While tucked away in a decked-out trailer before a show in sunny California, he looked around and compared the greenroom on wheels to a bright red firetruck. He began to recall his experience working in the firehouse and said that it made him into the man and musician he is today.

“I was in the fire service for seven years, but I’ve always said it helped a lot. It kind of made me who I am,” said Braden. “It helped control emotions because there are a lot of ups and downs in both careers. I would’ve been a completely different person. So, I’m glad it happened the way it happened.”

As Braden’s music career began to pick up speed, he told CMT that he turned to seasoned singer-songwriters for guidance to build a supportive community.

“I’m blessed to have a lot of people that I can really turn to,” he mentioned full of enthusiasm. “I’ve got a lot of artist friends. I’m friends with Breland, Chase Rice, and the guys at my management,” he added.

Braden placed his name on radars nationwide after signing a record deal with Warner Music Nashville and releasing his major-label debut of NEEDTOBREATHE’s smash hit, “Brother” in 2020. The poignant melody displays Braden’s captivating vocals and superstar potential. The track was a tribute to the men and women in his old profession, who have dedicated their livelihood to assisting others. Since the release, Braden toured with notable names in the industry like Brantley Gilbert and Brooks & Dunn.

Despite his magnetic stage presence and people-pleasing charm, Braden considers himself a “homebody.” However, he said Gilbert encouraged him to step outside his comfort zone while performing on the Fire’t Up Tour 2021.

“Brantley was such a great influence while we were on the road,” he explained. “Anytime we were around, it was like, ’Hey man, you want to go sit down? You wanna hang out?’ He easily could have been a loner himself and went on his bus and disappeared, but he wasn’t. I learned from that…I am a homebody and loner, but I’m never standoffish in that way. Some people think I’m mean, because I’m so quiet,” he pointed out.

Braden explained that their tight-knit relationship went beyond music; they discussed everything from marriage to starting a family. The 33-year-old artist tied the knot with accomplished photographer Marisa Taylor in mid-April 2022 at Joshua Tree National Park.

“He’s a family man all around,” he said about country-rock hitmaker. “He always had his wife and kids on the road. Marisa and I just got married, and he just showed us that family is number one. He always went back to that. He was just such a nice guy.”

The “What I See” artist said that he admires Gilbert for staying true to himself and his values, while navigating the highly competitive genre. While praising the award-winning musician, he also revealed other multi-platinum performers he respects.

Ayyy! Thanks for having us brother! Let’s goooo! https://t.co/RTbnFHEv13

“Artists like Luke Combs, Eric Church, Brantley Gilbert, Brothers Osborne, and HARDY – stayed themselves and didn’t change because the industry wanted them to. Breland has done the same,” voiced the breakout star. “I kind of look up to all those guys in that manner. I want to be who I want to be. I don’t want to end up changing because the industry wants me to,” he stressed.

The “American Song Contest” semi-finalist said that his main priority is to create music that represents him to his very core. Braden hopes his fans resonate with his raw and authentic music.

“I hope I’ve stayed true to who I am,” he said while reflecting on his impressive catalog. “I’ve seen that in so many different places, and that’s kind of what I look up to. I thank everyone so much for the support. I just hope when we’re doing live shows, the emotions we felt when writing the song come across. The most important place you connect with ’em [the fans] is at live shows. So, I just hope they know that we’re out there giving 110% every time, and we appreciate every single person that comes.”

With over 120 million streams to his name, the promising new artist is performing at prestigious venues and world-renowned festivals nationwide until September. Braden’s set list will include fan favorites from his seven-song EP “What Do They Know,” which includes his emotional SiriusXM’s The Highway No.1 hit, “Try Losing One.” For upcoming appearances, visit tylerbraden.com