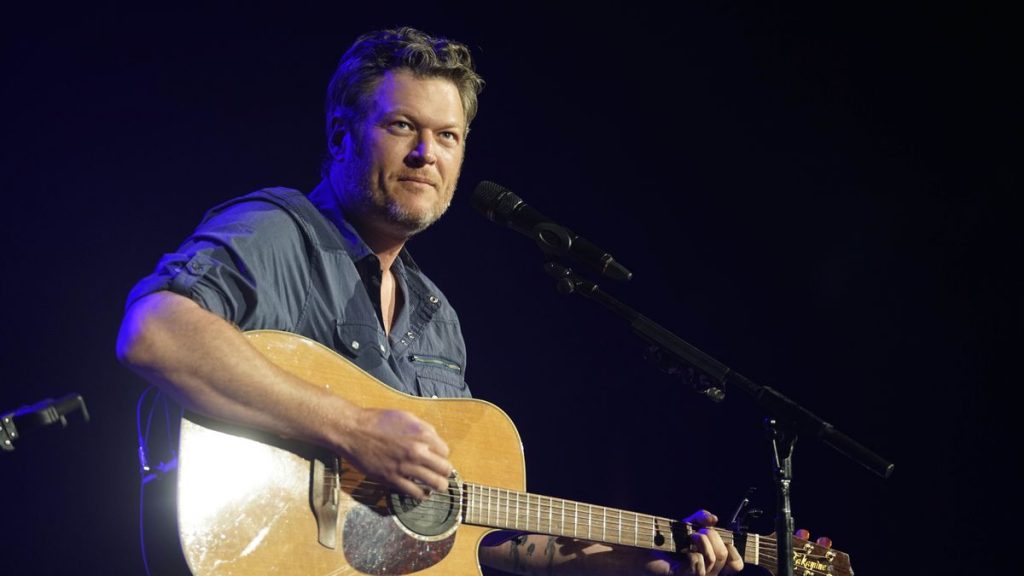 Bonaguro: When you think back all the way to your debut record in 2001, you’ve changed your songwriter circle a little bit. And you’ve done some outside cuts. But definitely for the past few records, you’ve had a circle of writers that you seemed to love working with. But is “Minimum Wage” the first time that you’ve cut a song from Nicolle Galyon, Corey Crowder and Jesse Frasure?

Shelton: I feel like it’s the first song I’ve cut by Nicolle. But I think I drift towards songwriters more than they drift towards me. Because certain writers are really great at writing about specific things, and depending on where I’m at in my life and what I’m doing, I’ll try to find those songs. And then when I ended up being in such a happy spot like I’ve been the last four or five years, I just keep going back to the well, because they’re writing the songs that I feel like are from my point of view. And several of them write towards whatever’s going on or whatever they think I’m going to be like. I’ve been told that before. But I never know if I’m recording a song that they specifically wrote for me, or if it’s just a song they wrote that I relate to. I normally never find that out until well after the fact.

I remember when you talked about the first time Scott Hendricks sent you “God’s Country,” and how you were literally outside working in God’s country, and you were like, “Oh my God, I have to cut this song.” Tell me about how you felt when you first heard the demo of “Minimum Wage.” What was it that made you think, “I am going to cut this song”?

I just related to the lyrics so much, you know? Just like probably 95 percent of artists out there, I struggled for so long to get by. But at the end of the day, I wouldn’t trade those times for anything. Those days when the big struggle was, “Man, do I pay my rent or my electric bill, or do I just say screw it and go buy some beer?” You had to decide because you didn’t have enough to go around. But those really were some of the best days of my life that I still think about all the time. And I think about all the jobs and things that I did over the years, just so I could play music for free somewhere.

I’m not a country artist, but I feel like there isn’t anyone who doesn’t relate to that feeling and remember that feeling. I remember like it was yesterday, sweeping up hair and washing towels at a hair salon. You have to do those jobs so you appreciate the ones that come next. And I recall talking with you earlier about roofing houses in Oklahoma, painting Hoyt Axton’s mom’s house, and being the tape copy guy at Balmur Music. When you moved to Nashville in 1994 — almost 27 years ago — what were some of the other minimum wage jobs that you did to make ends meet so that you could go play music at night?

If I was making minimum wage back then, it was barely minimum wage. But at the same time, I was super young, and just needed what I needed to get by. The other main job that I had — that I was able to at least get by on — was singing demos. And strangely enough, you would think when you get a record deal, that’s when you start making the big money, right? Well, I got my record deal in 1998 and the demos work stopped immediately. So those would’ve been some of the tightest financial years of my life even after the record deal. Because people assumed, “Oh, Blake got a record deal. We can’t hire him to do demos anymore.” And I made $40 a demo. That was the difference in making ends meet or not, so when that went away, it really got tough. But at the same time, I knew what I wanted and I just didn’t even care. I wanted to sing. And whatever I had to do to get by to be a singer, I didn’t care. And luckily, the record finally came out and did what it did and I never really had to look back since then, which is fortunate.

So did you ever do the playing-for-tips thing at all the honky-tonks in Nashville?

I didn’t really, because I was more plugged into the songwriting circle as the demo guy for a long time. And because of that, I didn’t spend a lot of time on Broadway, but I did play a lot of gigs. I would load up a van with my bass player who’s been with me now for 25 years. And we would drive in my truck from Nashville, Tennessee, and back to Oklahoma where people had actually heard of me. That was about the only place I could get bar gigs. And we would split up the money, just enough to basically pay for gas to come back and forth. If we had a gig, it’s all we thought about for months. Like, “Man, I can’t wait until November when we get to go play that bar.” But in Nashville, there used to be a place called Jack’s Guitar Bar, and I played there a lot. Back then, though, it wasn’t like it is now. You didn’t really necessarily want to be downtown after dark in the 90s.

The line I think I love the most in this new song is “you can make a six pack on the carpet taste like a million dollar bill.” I know that feeling all too well: there were so many six packs of Stroh’s, Schlitz, Goebel, Hamm’s and Old Style from my minimum wage years. Did you have a go-to six pack during those leaner times?

Man, I’ll tell you what. I don’t even know if they still make it anymore, but they used to make something called Bud Ice. And if you got you a six pack of Bud Ice — and they had those bottles that looked like they were chiseled out of a block of ice — and if you were lucky enough to have a date, nine times out of 10 back then the girls wanted to have Zima. So you had to find somewhere that even had Zima, and if they were really fancy they’d have Zima Lime. Then it was like, “Hey man, can I borrow $5? I think she likes Zima Lime.”

So I have to ask, were you surprised that some people kind of misunderstood the message of this love song? Like as if you — a literal millionaire or billionaire or whatever — would have no idea what it’s like to live paycheck to paycheck and earn $7.25 cents an hour?

Not really Alison, because I just feel like these days, there are people out there who don’t want to know the truth. They just want to hear what they want to hear, and they want to pick a fight. No matter what your intention is, no matter what the truth is, they want it to be something that they can be upset about so that they can get on social media and try to grab a headline. With “Minimum Wage,” at first I thought, “Wow, I guess I just I’ve missed something here.” And the more I read into this, I realized this was really not real. Whatever this backlash is is just four or five people that probably don’t know anything about country music. They clearly hadn’t heard the song or read the lyrics. If they had, they couldn’t feel this way about the song. It’s literally a love song about how if times are tight and you ain’t got much money — as long as you have love and you’re happy — at the end of the day, that’s all any of us can really hope for. You got it if you got that. That’s all that matters. And if that’s offensive to you, then we’ll just have to agree to disagree.

I agree. Because I look at the lyrics and I remember how those lean years felt, but how love — when it’s good and it’s pure and it’s true — makes the fact that you’re splitting a Waffle House special irrelevant.

Right. And that’s what makes some of the best memories, you know? I have to say, if we have to start thinking like this, then I guess that’ll be where I have to bow out. Because that’s one of the longest-standing traditions in country music is lyrics about love. And if you’ve got love, then that’s all that matters. There won’t be much left to play or write about on country radio if this is something that we have to think twice about. So I’m going to put out the records that resonate with me and my life and not look back. As country artists and as an industry, we have to stay focused here and know that what’s right is right. And I believe this song is a great message and I’m proud of it.

So then how do you even respond to the negativity when you’re just trying to do your job and make country music?

We’re at a point now where it doesn’t even deserve a response. That’s why I didn’t come out initially and say anything, because they’re not entitled to a response from me. This is absolutely ridiculous. I looked after the first day when those headlines were popping up, and then for the next week after that, I didn’t see any more. It was hard to find anything negative. If it was something negative about me, it had to do with “I hate Blake Shelton” because of some other reason. Most people were saying, “I don’t get what’s so offensive about this song.” And that made me so happy that Ronnie Dunn came up and spoke out about how he puts his money on the common sense of the common hard-working people out there. And I do, too.

The bottom line is, Shelton’s “Minimum Wage” is a classically country love song about how priceless real love is. Shelton’s not the first one to use this kind of metaphor, and he won’t be the last. Charley Pride’s “All I Have To Offer You Is Me,” John Anderson’s “Money In The Bank,” Alan Jackson’s “Livin’ On Love,” and Chris Stapleton’s “Millionaire” all share the same message that if you have love, you feel rich. Even if all you’re making is $7.25 an hour.

“Minimum Wage” will be released to country radio stations on Friday (Jan. 15).

Yeah I met you ‘fore anybody knew my name
Playing for pennies on the dive bar stage
Split an All-Star Special on our first date in a Waffle House booth
Your daddy was crying when he gave you away
‘Cause all those country songs I played
They didn’t come with a 401K, but hey, I had you