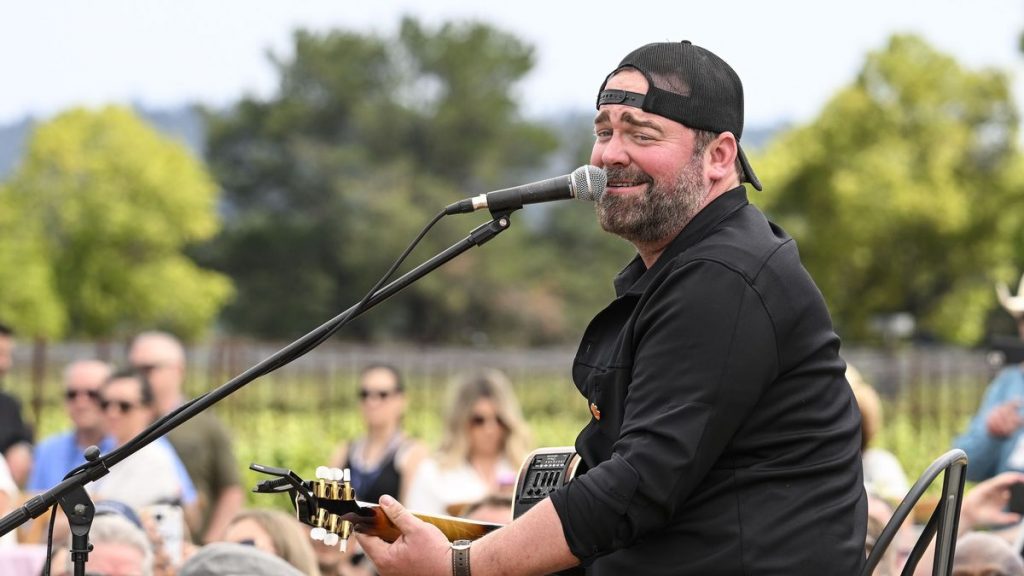 Without any bells or whistles, Lee Brice allowed his butter-like baritone vocals carry his performance at Live In The Vineyard Goes Country – touching each “Soul” singing along in the audience. The private concert that overlooked rolling hills of grape vines, served as a small preview to his upcoming Label Me Proud Tour.

With an acoustic guitar placed gently on his lap, the multi-platinum performer delivered fan favorites like – “One of Them Girls,” “Hard To Love,” “Drinking Class,” and “I Don’t Dance.” However, his current single “Soul” instantly had festival-goers on their feet swaying to the groovy rhythm.

A wave of emotion overcame the seasoned singer-songwriter, as he watched country music bring folks back together. It’s the unity and joy that comes along with live music, that Brice missed the most when the entertainment industry was brought to a sudden halt.

“Just having fans back is just awesome,” Brice told CMT following his set. “That energy came back. Those smiles, voices, claps, and real-life people there instead of singing into a camera…that was beautiful,” he stressed.

The hitmaker continued to mention that he was pleasantly surprised by the reaction to his Motown-esque radio single, “Soul.” Kevin Kadish and Tony Ferrari penned the R&B-funk jam, which lives on Brice’s 2020 record, “Hey World.”

“It was fun to watch people sing that song because it’s kind of the way I felt when I heard it,” he explained. “Whatever reason, this thing [the melody] just catches me. It’s catchy, and it’s doing well. So, We’re going to keep rocking it,” he added.

With the successful single added to his impressive catalog, the award-winning artist believes he is ready to get back on the road and hit the ground running.

“We’re excited about the tour,” he gushed. “It’s coming quickly.”

Come June 2, Brice will be kicking off his 20-city trek with opening acts Michael Ray, Tyler Farr, Tim Montana, Jackson Dean, and Jameson Rodgers for select dates. Although the father of three is fleeing his family for the summer, the vocalist did not hesitate to express his excitement about the upcoming adventure with long-time friends.

“I just love doing music tours with friends! I have done tours with people I knew, but not necessarily like close friends with them,” he confessed. “We’ve been fishing together and all that stuff. All these guys coming out here with me on tour are the best. We’re like best buds. So, that’s just going to make it so much more fun. Hopefully, that resonates in the show as well, to the crowd.”

Brice warned CMT that road life might get “a little wild” this time around.

“The better you know each other, the more you pick on each other,” he laughed. Although, Brice hopes to strike a delicate balance between work and party. “We’re going to do late-night writes and work on some songs. They’re all talented. We’re going to try to grow up a little bit and do play time, but we are also going to write songs and do stuff like that.”

Writing and recording should be an easy task to complete, as his house on wheels has a state-of-the-art studio.

“I got a studio on the bus,” he pointed out. “So, we’re probably getting out there and will probably come back home from this tour with some brand new music,” he confirmed.

Until fans get their hands on new material – the country crooner warned his listeners to prepare for a new version of “Soul,” which will feature a special guest.

“There are some possible collaborations on a new version of “Soul.” Then more collaborations that we’re still trying to get worked out,” he declared with a secretive smile. “It’s gonna be pretty fun! There may be another B somewhere…look up initials “BB” and see what comes up,” he concluded provoking a guessing game.

Tickets to Brice’s Label Me Proud Tour are currently available for purchase, here.