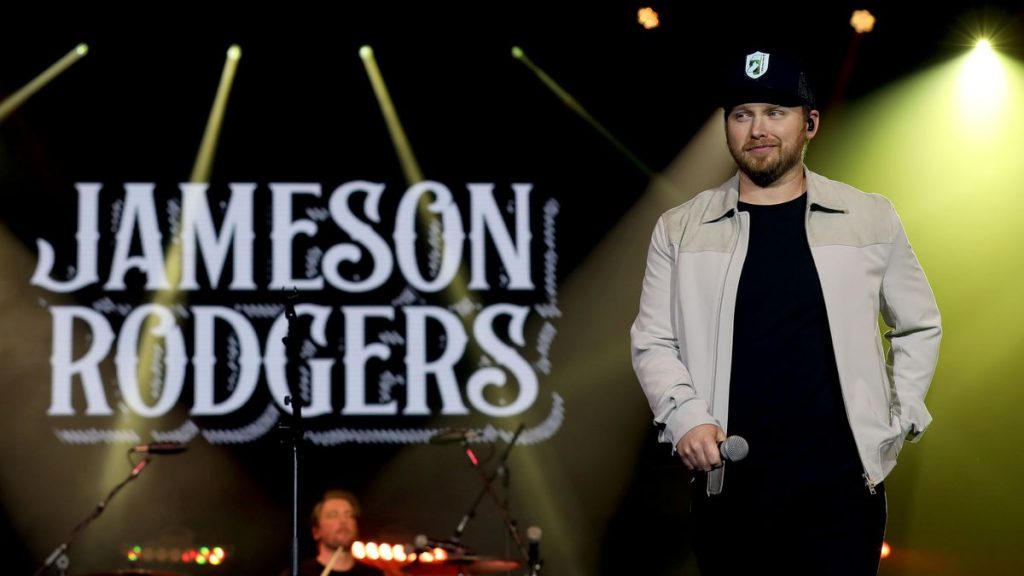 Exclusive: Jameson Rodgers Talks Rapid Rise To Fame And Relationship With Luke Combs: “I Can’t Believe This Is Happening.”

If a country music fan were a fly on a wall in Jameson Rodgers tour bus or green room – they would watch the breakout star shake nerves with a glass of Jack Daniels on the rocks, while relishing in a playlist that includes AC/DC. Despite touring with music sensation Luke Combs, the Mississippi native told CMT that he still finds his relatively new lifestyle abnormal.

The fast-rising artist does not take his rapid rise to fame lightly. Since picking up a guitar in his early twenties, he would catch himself fantasizing about a successful music career.

“Just a dream come true,” said Rodgers backstage at Live In The Vineyard. “I used to go and see artists like Eric Church and Jason Aldean when they were kind of at this level – playing clubs and stuff when I was in college. I always wanted to go do that. It’s pretty surreal getting to do it.”

It was Eric Church’s first record, “Sinners Like Me” that encouraged Rodgers to open his eyes and pursue country music full-time.

“I grew up listening to nineties country. Garth Brooks was my first memory of music. I grew up playing baseball. So, I called it ’baseball music,’” he shared with CMT with a smile. “But Eric Church…I love his songwriting and his style a lot. His first album really made me take music seriously. I didn’t realize you could write songs in that lane,” he added with confidence.

Rodgers moved to Nashville in 2010 with nothing but a suitcase, limited song titles, and a pipe dream. It wasn’t long until he received co-writing credits on smash hits such as Florida Georgia Line’s “Talk You Out of It,” Luke Bryan’s “Born Here Live Here Die Here,” Chris Lane’s “I Don’t Know About You,” and more. However, his 2018 debut single “Some Girls,” placed him on radars nationwide as a vocalist.

The playful love song made for mainstream radio was his leaping pad to stardom and served as Rodgers’ first No.1 single. While expressing his gratitude, the chart-topping artist acknowledged the rigorous climb in the ten-year town and pointed out that it is not-so-glamorous as an outsider might assume.

“People don’t see what happens behind the scenes that artists and individuals in the business have to do. We were just talking about the all-day plane rides, nobody loves to do that,” he stressed before declaring that he wouldn’t exchange it for the world. “When I’m on stage, I’m like, ’It was worth doing all that stuff.’ I think every job you have to do stuff that you don’t necessarily want to do sometimes, but it gets you to where you want to go,” he added.

Working around the clock for over a decade has finally paid off for the country traditionalist. Standing within the sacred circle at the Grand Ole Opry or listening to ticket-holders belt back the lyrics to his songs is what makes him pinch himself.

“Whenever I am standing side stage, anytime a crowd sings back a song to me, or anytime I get to play the Opry – I’m like ’wow, I cannot believe I’m playing the Grand Ole Opry.’ When I get to go back to Mississippi and play a sold-out show where I grew up, it is always awesome,” he said, trying to wrap his head around his flourishing career.

The soft-spoken singer confided in CMT and revealed that he struggles to celebrate his big or small achievements, as he is constantly overthinking his next move.

“I keep my head down so much that it’s hard to look up and say, ’Oh, I’ve actually done this. I’ve had this success.’ You’re always worried about the next day or the next song or the next show,” Rodgers declared.

He continued to mention that Combs relieved some of the pressure he speaks of, when he decided to jump on his 2020 smash single, “Cold Beer Calling My Name.” The drinking song scored the No.1 spot on both the Billboard Country Airplay and Mediabase/ Country Aircheck charts in October of 2021.

“Fortunately, I’ve known Luke since before he was like really famous,” laughed Rodgers. “I’ve gotten to see his career go crazy and take off. I am so lucky and fortunate that he took me out on tour and jumped on that song with me. “Some Girls” got me off the ground, but I feel like “Cold Beer Calling My Name” really put a little more air under my wings.”

The multi-platinum artist declared that he felt like an overnight sensation when he dropped the party track with Combs.

“It was weird,” he pointed out. “My last show was before the pandemic started, and ’Some Girls’ wasn’t even in the top 50. So, by the time I played a show after the pandemic, ’Some Girls’ had gone No.1, and ’Cold Beer Calling My Name’ was in the top 30. I went from zero hits to a hit and a half overnight. I can’t believe this is happening…I was just wanting to go play,” Rodgers uttered.

When ’CBCMN’ officially went No.1, he began his hunt to get Combs something special to celebrate their victory. So, when the 34-year-old came across a golden champion belt while visiting a radio station in Nashville, Rodgers knew that he had found the keepsake he wanted to represent the honor.

“I said, ’If this song goes No. 1, I’m ordering one for the whole team.’ That’s what I did, and he loves it,” he gushed. “It’s hard to get somebody a gift that has everything. I had to think outside the box. I figured he didn’t have a wrestling belt in his man cave, and he didn’t.”

The hitmaker recently released his “Live From Oxford, MS” record to keep the positive momentum up. To cultivate the collection, Rodgers returned to his old stomping grounds of Oxford, MS, to record eight of his best songs live during a sold-out show at the historic Lyric Theater. The project captures Rodger’s country-rock sound and proves that he is one of the few must-see acts in the genre.

The country music mainstay confirmed that new music is just around the corner and that fans should expect a fresh batch of content fall of 2022.

“I think fall is a good realistic timeline,” he exclusively conveyed to CMT. “We’re just going to go record a bunch of songs. It might end up being one song every four weeks or a batch of 12… I don’t know, it could be anything,” he concluded with a secretive smile.

While writing and recording, the breakout star will be making stops nationwide at respected music festivals. Tickets are available for purchase, here.